We missed the humor:  CAIR-Chicago spotted this troubling greeting card (pictured below) in a local store.

The card features a photo of a Muslim doll with a Hijab (headscarf) that many Muslim women wear out of religious observance. The The talking bubbles placed on top of the doll’s photo read, “The Talking Doll, Pull string for message, if you dare,” and “She’ll Love You To Death! She’ll Blow Your Brains Out!” The inside of the card reads “Hope your birthday is a BLOW OUT!” 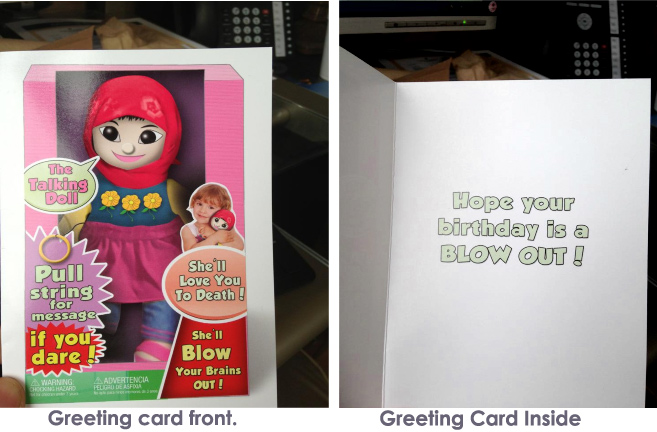 The card is produced by NobleWorks Inc. with credit for its design given to “Ron Kanfi” according to the company’s website, www.nobleworkcards.com. The motto of the company printed under their logo on the back of the card is “modern cards for modern people.”

Notice that nothing identifies this doll as a terrorist in the minds of the card designers other than that she wears a Hijab. Moreover, she – like many Muslim girl who choose to wear the Hijab – is a smiling, non-threatening normal-looking female wearing a pink Hijab and a flower-patterned dress. The unmistakable message behind the “humor” is that even the most peaceful looking Muslims are synonymous and exchangeable with terrorists.

To make matters more disturbing, the card is based on an actual doll designed by Desi Doll Company (www.desidollcompany.com) called “Aamina, the Muslim Doll.” The doll teaches kids religious greetings and sayings in Arabic with messages like “Assalamu Alaikum is the Muslim greeting, and it means peace be upon you” and “Let’s play together insha’Allah, insha’Allah means if God wills it.” 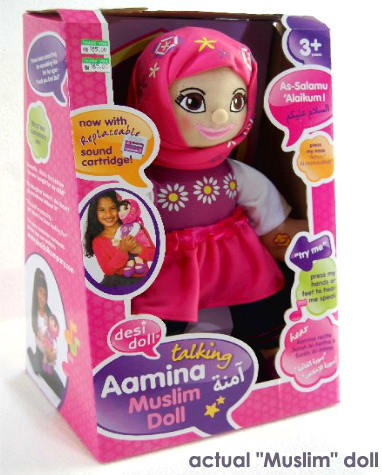 The entrepreneurial mother of three who left a cushy job to found this company in the hopes of better teaching her kids Urdu and Arabic probably could not have fathomed that a benign and even laudable endeavor could be twisted into such a bigoted excuse from humor to by another entrepreneur who does not seem as concerned with the message he would be conveying to his own children, let alone hers.

“My name is Farzana Rahman and I am the founder of The Desi Doll Company. I am mother to our daughter Zahrah and twin boys, Sami and Zain; my inspiration. It all started when my daughter was 2 ½ years old 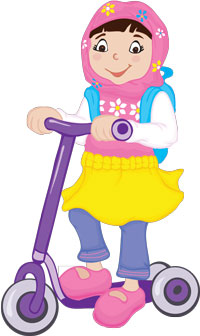 and I was trying to find toys that would help her to speak her mother tongue, Urdu. Failing to find anything, I embarked upon designing a talking Urdu doll myself.

It wasn’t long before I realized that there was a lack of language toys for the “Desi “ languages, ie. Languages spoken in the Indian sub continent – and so the project became to design a doll that was able to speak several languages. This was a huge project! And after 2 years working on and off the project I realized I couldn’t focus on this whilst working as well.

It was only after I had my twin boys in November 2006, that I decided to swap the world of Investment banking for Toy Design and manufacturing.

Realizing that the language dolls was technically a very complex project and would take some time; I decided, in the mean time, to launch our Arabic/English talking dolls, Aamina and Yousuf , which went from design concept to shops in just 5 months, just in time for Eid 2008.”

Islamophobic generalizations and negative stereotypes often hit those who are most visibly perceived as Muslim, and women wearing the Hijab are often the group hit the hardest.

Many Muslim women around the world, certainly in the US, choose to wear the Hijab as a free-willed expression of modesty and self-respect. For them, it is a message that men should address their minds and not their bodies.

And yet all too often, they have to watch themselves being portrayed as oppressed and submissive on cable network talk shows, movies, and documentaries. While on the street, they have to deal with dirty looks, jeering, or in extreme cases, even physical assault, as has been documented by several cases reported to CAIR.

Most recently, conservative right wing commentator Ann Coulter claimed on FOX News that wearing the Hijab ought to be an imprisonable offense.

I recall walking in the mall with my younger sister who chose to wear the Hijab at 18 (my older sister has not of yet); not so used to the attention, I asked her, “why are people looking at you like that?” She said “what people, I don’t even notice it anymore.”

The case of the greeting card is particularly repulsive given the sobering realization that even the  innocence of our young girls and their toys are not spared. After posting an image of the card on a social network, a mother of an 8 year old contacted me telling me how upset she is. “My daughter loves the Aamina doll, she takes it with her everywhere. You press its hands and feet and it says the sweetest things. I am appalled.”

The greeting card is not the first time the pink-scarf clad, smiling doll has been used to represent terrorism. Act For America, cited by the SPLC, CAIR, and the ADL as a hate group, posted the below image on its wordpress blog with the message, “The latest toy has hit the shops… A talking Muslim doll. Nobody knows what the hell it says, because no one has the guts to pull the cord.” NobleWorks Cards is however the first company that is profiting from this blatant stereotyping. 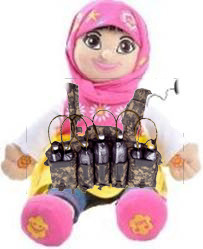 There are those who will claim Muslims do not have a sense of humor. But one would like to think humor comes with (even a minimal degree of ) intelligence. The notion that a doll, that looks like any other doll that any little girl in the world would play with, can be presented as a terrorist doll simply and only because it is a “Muslim” doll or because it has a “Muslim scarf” on its head is not what defines “funny” for a lot of people, but bigoted, ugly, idiotic, moronic, etc.

Contact the makers of the greetings card and let them know that you do NOT think that stereotyping Muslim women and girls is OK. Ask them if they would get a chuckle out of their daughters growing up exposed to messaging that criminalizes their basic identity for profit. (CAIR-Chicago has written an official letter to the company sharing its concerns.)

As always, be firm and polite.

Update: NobleWorks Card company also sells the “Shiite Pet Funny Greeting Card.” It pictures a scruffy bearded parody of a Chia Pet with the captions “This gift is the Bomb” and “Thrives in the Dark.” Shiism is a sect of Islam practiced peacefully by tens of millions of people around the world. 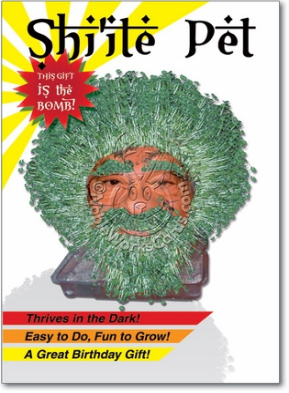