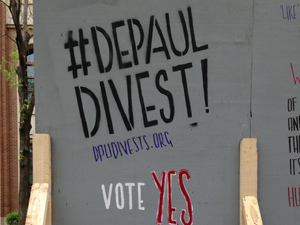 The Students for Justice in Palestine (SJP) group at DePaul University in Chicago has initiated the latest in a series of SJP divestment campaigns at universities across the U.S. Like all the other campaigns, SJP-DePaul’s has been met with well organized opposition by both on and off campus groups.

DePaul Divest, initiated by SJP-DePaul, is a “coalition of DePaul students, faculty, and staff who oppose Israeli human rights violations in Palestine”. Like the more than fifteen SJP-led divestment campaigns at universities so far this school year, the goal of DePaul Divest is to have the university “divest from corporations that profit from the Israeli occupation of Palestine”.

These companies include Hewlett-Packard (supplies a biometric access control system for Palestinians at checkpoints in the West Bank and Gaza); Caterpillar (sells militarized bulldozers to the Israeli army used to demolish Palestinian homes and build illegal settlements); Veolia (manages a landfill in the West Bank used exclusively by Israeli settlements); and Boeing (supplies Apache helicopters to the Israeli Army).

The DePaul Divest campaign is unique among campus divestment campaigns in having a student referendum instead of a student government vote. If the referendum passes, the student government will be obligated for the next year not to pass any resolution that would nullify or infringe on this divestment resolution. The referendum is only a recommendation to the university administration, but SJP-DePaul plans to use the referendum to pressure the university’s Fair Business Practices Committee to divest from these corporations.

DePaul has a history of student-led campaigns that target corporations or products involved in violating civil or human rights. In the 1970’s, there was a student campaign against non-union lettuce, part of the national United Farm Worker’s campaign led by Cesar Chavez. In 2006, the Student Government Association voted to support a boycott of Coca-Cola as part of a national campaign concerning the assassinations and intimidation of trade unionists at the Coke bottling plant in Colombia. SJP-DePaul also led a campaign against Sabra hummus in 2010 because of the parent company’s involvement in the financial and material support of the Israeli military. But as has been the case with divestment campaigns at other campuses this year including recently at Loyola University in Chicago, the campaign at DePaul has been met with significant opposition not only by pro-Israel student groups but also by national pro-Israel lobbying organizations.

In an interview with a student opposed to the divestment campaign (she requested I not use her name), she stated that their group, Blue Demons Against BDS was an ad-hoc group of individual students supported by other DePaul student organizations such as DePaul Hillel, Alpha Epsilon Pi (a national Jewish Fraternity), and others listed on their FaceBook page. Checking the group’s FaceBook page, there were no supporting organizations listed. On a WBEZ Worldview program on May 15, Leila Abdul Razzaq, president of SJP-DePaul and Cameron Erickson, president of Demon PAC: Students Supporting Israel at DePaul (Demon PAC) spoke as the student leaders on both sides of the debate. Neither Blue Demons Against BDS nor Demon PAC are officially registered as DePaul student organizations.

Demon PAC is described on their FaceBook page as a “Pro-Israel Political club. Our mission is to promote and strengthen the US-Israel relationship through direct involvement in the American political process.” Unlike the SJP-DePaul group, neither the Blue Demons Against BDS nor Demon PAC are officially registered student organizations. On the Demon PAC FaceBook page it also indicates that its “members are AIPAC trained student activists.” The American Israel Public Affairs Committee or AIPAC is the major pro-Israeli lobby in the U.S. and provides multiple courses for college students. Ben Harris from JTA.org provided a video report in 2010 on AIPAC’s strategy of recruiting student leaders . The video quotes Jonathan Kessler, AIPAC’s leadership development director, on an aspect of the training related to campus divestment campaigns:

In addition to AIPAC training, the Demon PAC students were also assisted at the beginning of the week by members of StandWithUs, a national pro-Israel educational organization, who were wearing T-Shirts and engaging directly with students on the DePaul campus. The T-Shirt message “DePaul is Pro-Israel, Pro-Palestine, Pro-Peace” reflected the main slogans about divestment campaigns promoted by StandWithUs.

Although not official student organizations, Demon PAC and Blue Demons Against BDS have had a very visible presence on the DePaul campus this week. The Blue Demons Against BDS representative stated that they had been very active in “making [themselves] available for dialogue with students…who were not being given all the facts.” Members of the two groups had a table set up on the quad handing out free pizza to students and explaining their anti-divestment position. She explained their primary objections were that Israel was being “singled out unfairly as there are human rights violations in many countries” and that “BDS is a political and religious campaign.” Because the BDS movement “wants the Palestinian right of return and not a two-state solution, it prevents Israel’s existence as a Jewish state…and perpetuates anti-Semitic sentiment in the world.” She said that the divestment campaign had “created a semi-hostile environment on campus” over the last two weeks, but didn’t indicate any Jewish students had been targeted as has been charged by anti-divestment student groups at other campuses.

DePaul Divest is part of the non-violent movement based on the Palestinian Civil Society Call for Boycott, Divestment and Sanctions (BDS) against Israel released in 2005 by 170 Palestinan organizations. It calls for BDS to continue “until Israel complies with international law and universal principles of human rights”.

These non-violent punitive measures should be maintained until Israel meets its obligation to recognize the Palestinian people’s inalienable right to self-determination and fully complies with the precepts of international law by:
1. Ending its occupation and colonization of all Arab lands and dismantling the Wall
2. Recognizing the fundamental rights of the Arab-Palestinian citizens of Israel to full equality; and
3. Respecting, protecting and promoting the rights of Palestinian refugees to return to their homes and properties as stipulated in UN resolution 194.

Hanna Alshaikh, a member of SJP-DePaul, explained that sixteen student organizations including the National Lawyer’s Guild – DePaul Chapter, DePaul Amnesty International, DePaul Black Student Union, MEChA de DePaul, and the South Asian Students Association supported the divestment campaign and indicated the multiple ways the group worked at informing students on the issues. These efforts included an informational website and the teach-in going on at the SAC building as we spoke. She also indicated that DePaul Public Safety had been called multiple times by their opponents when the SJP group was legally flyering or holding teach-ins. Earlier in the week, the SJP-DePaul group had responded to many of the rumors and misinformation that was being spread about the campaign including the rumor that “if the DePaul Divest referendum passes, it will cause all Jewish student organizations to lose funding and they will therefore cease to exist on campus”.

Neither group would predict how the student vote would turn out at the end of voting on Friday May 23 given the intensity of the week long campaign. But no matter the outcome, the DePaul Divest coalition will continue to press their case with the university to divest from corporations that they see profiting from the violation of Palestinian human rights.

The DePaul Divest student referendum passed this afternoon. Even with increased involvement of outside campus groups like StandWithUs during the week of campaigning and a visit to the campus by the Israeli Consul General, the DePaul Divest coalition and the DePaul SJP were able to communicate their message of support for Palestinian human rights to the student body.