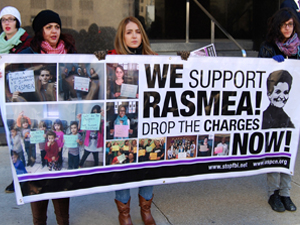 On June 10 in Detroit, Rasmea Odeh, a 66 year old Chicago Palestinian and Arab community organizer, will start her trial for allegedly “lying” on her twenty year old citizenship application about an over forty year old conviction in an Israeli military court. If found guilty, she could face up to ten years in federal prison, an immediate revocation of her citizenship, and deportation from the United States. Given Odeh’s stature in the Palestinian and Arab community in Chicago as a tireless organizer for women and immigrant rights, these years old charges only indicate the extremes the government is willing to go to suppress Palestinian activists.

Odeh was arrested at dawn at her Chicago-area home by agents of the Department of Homeland Security and charged with immigration fraud. The indictment claims she did not disclose on her immigration application that she was arrested and convicted by an Israeli military court 45 years ago and then held in Israeli jails from 1969 until 1979.

In 1969, the Israeli military arrested Odeh in Ramallah. She was taken to an Israeli detention center, where she was subject to torture and sexual assault. Odeh was charged for her alleged association with the Popular Front for the Liberation of Palestine (PFLP), a group that the U.S. has designated a terrorist organization, and for suspected involvement in two bombings in Jerusalem, one of which killed two civilians. Odeh was tortured into making a confession and has always maintained her innocence of the charges.

Odeh was processed by an Israeli military court system that routinely bypasses due process holding Palestinians without charge or trial for months and years. In a monthly detention report from Addameer, a Palestinian prisoner support and human rights organization, this same system today holds over 5,000 prisoners, with over 200 being children. Odeh was convicted, like the vast majority of Palestinians in the military court system, and sentenced to life in prison. Her home was destroyed by the Israeli military after the verdict. Odeh spent ten years in prison before receiving a pardon and being released by Israel as part of a prisoner exchange.  She went to Jordan, became a lawyer and continued to be an activist for Palestinian rights.

In 1994, she traveled to Detroit, obtaining her U.S. citizenship in 2005. From Detroit, she came to Chicago and joined the Arab American Action Network (AAAN), a social services organization, as their Associate Director and Community Adult Women Organizer. The AAAN utilized her broad experience with women’s and workers’ unions, family and domestic violence groups, human right centers and the Red Cross. She is founder of the organization’s Arab Women’s Committee which now includes over 600 members and earlier this year, Rasmea received the “Outstanding Community Leader Award” from the Chicago Cultural Alliance. Odeh has devoted her time to working with Arab immigrant women, establishing projects related to civil and human rights, social justice and community economic development. She has promoted literacy and political education and organized workshops on domestic violence and anti-Arab expression.

Odeh’s arrest also appears to be related to the case of the 23 Palestinian and anti-war activists subpoenaed to a grand jury in 2010. Well-known Palestinian and anti-war activists around the Midwest had their homes raided by the FBI when the U.S. attorney alleged that they had provided material support to foreign terrorist organizations in Palestine. There have been no indictments against the 23 activists, presumably because of a lack of evidence.  Assistant U.S. Attorney Barry Jonas is leading the ongoing investigation against the 23 and on the day of Odeh’s arrest, he was present in the courtroom consulting with the prosecutor.

Jonas also played a leading role in prosecuting the leaders of the Holy Land Foundation (HLF) while he was trial attorney for the Department of Justice Counter-terrorism Section. He helped convict the Holy Land Five and secured up to 65-year prison sentences. This is the case that the ACLU described as having “violated the fundamental rights of American Muslims’ charitable giving in accordance with their faith, seriously undermining American values of due process and commitment to First Amendment freedoms.” Since the Supreme Court turned down the appeal of the HLF case in 2012, Ghassan Elashi, the HLF Chairman, remains in the “Little Guantanamo” of Illinois.

It was no accident that Barry Jonas was present in the courtroom on the day of Odeh’s arrest given he is a major player in a series of cases like Sami al-Arian, Abdelhaleem Ashqar, and Mohammad Salah that have targeted Palestinian activists and organizers for “material support for terrorism.”

On November 13, 2013 Odeh was arraigned and pled not guilty at the U.S. District Court for the Eastern District of Michigan, in Detroit, her original city of U.S. residence. Over 100 supporters from multiple cities in Michigan, Illinois, and Wisconsin protested outside the courthouse. Rallies of support also took place in Oakland, Minneapolis, Milwaukee, Chicago, Tampa, Gainesville, Philadelphia and Salt Lake City.

The official start of Odeh’s trial is June 10th in Detroit despite many months of groups organizing in Chicago and across the country to get the charges dropped. A guilty verdict that could lead to ten years in federal prison, revocation of her citizenship, and deportation from the United States is designed to put an end to her organizing for Palestinian and Arab community rights.

Ramea Odeh’s case is one more example of the federal authorities continuing to search for ways to intimidate and silence those who are effective advocates for Arab American communities, and who speak out for Palestinian rights.

Statements of support have been made by over 100 organizations throughout the country including American Friends Service Committee, American-Arab Anti-Discrimination Committee, American Muslims for Palestine, CAIR-Chicago, Center for Constitutional Rights, Jewish Voice for Peace, Palestine Solidarity Legal Support, Students for Justice in Palestine National and the US Palestinian Community Network. More than 3,000 people have signed an online petition for the charges to be dropped.

Rasmea Odeh appeared in court in Detroit on May 28th and the beginning of her trial was delayed until October 21 so that her new lawyer would have time to prepare a defense. Odeh removed her Detroit-based attorney from the case and appointed Michael Deutsch of the People’s Law Office in Chicago. After the hearing, Deutsch told reporters that Odeh’s previous attorney had been negotiating a plea agreement with the government that in the best case would have seen her U.S. citizenship revoked, and her departure from the United States. Deutsch said that the government contends that Odeh has a valid Jordanian passport. However, he pointed out that there would be no guarantee that Jordan would not revoke her status. Jordan has a history of arbitrarily revoking the citizenship of Jordanian citizens of Palestinian origin. This could put her in jeopardy of being sent to the Israeli-occupied West Bank where she would not enjoy the relative protection afforded by US citizenship.

The Rasmea Defense Committee is continuing to organize fundraisers and plans to have her supporters fill the courtroom on October 21st.

In response to a motion from the defense, the judge in Rasmea Odeh’s case, Judge Paul Borman, has changed the trial date to Monday, September 8. The Rasmea Defense Committee is still planning on having a large turnout both in and outside the courtroom.

For an update on her case from her attorney, Jim Fennerty, and others – come to the CAIR-Chicago event “Criminalizing Immigrants: The Case of Rasmea Odeh” on May 19.

For ongoing updates on her case, to donate to her legal fund, and to get transportation information for attending her trial in Detroit. Go to the Rasmea Odeh Support site.

Pre-emptive counterterrorism: A shot in the dark