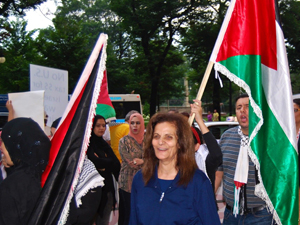 The judge for the case of Rasmea Odeh originally refused to step down even with a history of giving funds to pro-Israel organizations. After reviewing defense documents showing he had an undisclosed Israeli business interest in a Jerusalem store involved in Odeh’s original arrest, Judge Borman recused himself and Odeh prepares for a new judge and her next hearing on September 2.

As a reminder, Odeh was arrested by agents of the Department of Homeland Security and charged with immigration fraud. She is accused of not disclosing on her immigration application that she was arrested and convicted by an Israeli military court 45 years ago. While in an Israeli detention center, she was subject to torture and sexual assault by the prison authorities to obtain a false confession. Odeh was processed by an Israeli military court system that routinely bypasses due process holding Palestinians without charge or trial for months and years. (For additional background on Odeh’s case, see Rasmea Odeh: Repression of a Palestinian Community Leader.)

Odeh’s defense team of Michael Deutsch, Jim Fennerty, and William Goodman had prepared a motion for Judge Borman to recuse himself from the case due to his political and financial investment in organizations supporting the state of Israel. In a press release, it states that “in the papers filed with the court attorneys Deutsch and James Fennerty describe Judge Borman’s long history of support for Israel, including fund raising for, and donating millions of dollars of his own money to the state. After the initial hearing, Michael Deutsch explained, “The judge refused to remove himself from the case saying he was just a Jewish person providing support for Jewish organizations.”

A press release last month from the National Rasmea Defense Committee states that now Judge Borman admits his financial ties to Israel “could be perceived as establishing a reasonably objective inference of a lack of impartiality in the context of the issues presented in this case.”  Palestine Solidarity Legal Support reported that “Borman revealed that his family had ‘passive’ financial investments in SuperSol, the Jerusalem supermarket Odeh was accused of bombing in 1969.  Borman said that until now, he was unaware that SuperSol was the target of the bombing.”

The case has been randomly re-assigned to U.S. District Judge Gershwin A. Drain who has some history working in the Federal Defender Office. Judge Drain’s biography shows that “President Barack Obama appointed Judge Gershwin A. Drain to the United States District Court for the Eastern District of Michigan on August 8, 2012…Before his appointment to the bench, Judge Drain worked for the Federal Defender Office from 1974 to 1986. Prior to 1974, he worked for the Detroit Department of Transportation for one year and before that he worked as a law clerk for the Wayne County Circuit Court.”

A status hearing in front of Judge Drain is still planned for September 2nd in Detroit, and the Rasmea Defense Committee is asking supporters to fill the courthouse on that day. The Committee also had a call-in day last week to the prosecutors and to the Chief of National Security Unit in the Michigan U.S. Attorney’s office to drop all charges against Odeh. The date of the trial originally planned for September 8 is being rescheduled.