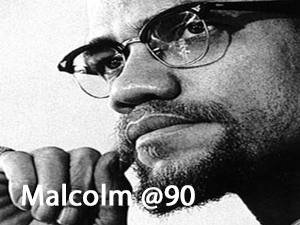 On this day when Malcolm X would have been 90 years old, the State of Illinois has designated “May 19, 2015 and every May 19 thereafter as “Malcolm X Day.” The Senate passed unanimously a resolution proposed by the Council of Islamic Organizations of Greater Chicago (CIOGC) and sponsored by State Senator Jackie Collins (D-Chicago  16th). Malcolm X is being recognized in the words of the resolution as “a singular human rights activist and one of the most influential African-American leaders in history.” His birthday on May 19 will be commemorated as a day of service in keeping with the values that Malcolm X represented in his life.

The focus of Malcolm X Day will be for all citizens in Illinois to honor the human rights values that he embodied. The CIOGC had a team of volunteers working on the resolution for more than a month.  The CIOGC is a unifying body across multiple Muslim organizations in the Chicagoland area and those that worked on the resolution represented African American, Arab, South Asian, and Eastern European communities among others. The genesis of a Malcolm X Day grew out of a CIOGC-sponsored event called “Malcolm X: The Voice That Lives Within Us” that was held at the end of March. As part of Black History Month, this event helped educate the larger Muslim community about the full story of Malcolm X’s life.

After multiple requests from members, CIOGC leadership took up the idea and decided to add it to their Illinois legislative agenda for this term. Dr. Bambade Shakoor-Abdullah, a CIOGC Board Member who had also been on the Muslim Advisory Council for former Governor Quinn, was also instrumental in supporting the resolution. Illinois State Senator Jackie Collins of the 16th Senate District agreed to be the sponsor and worked closely with the CIOGC to draft the resolution and help shepherd it through the Illinois Senate.

In the CIOGC press release about the passing of the resolution, CIOGC Chairman Dr. Mohammed Kaiseruddin commented on the values of Malcolm X:

Malcolm X was the embodiment of courage with which he stood up for truth and justice. The truth was so important to him that, in order to embrace it he showed no hesitation in changing his ways and rhetoric.

Both the city of Chicago, where Malcolm  X often spoke and worked, and communities throughout the state need to hear his  message of human rights, the equality of all people and power in the service of justice.  I am excited about the potential of  Malcolm X Day to inspire more of us to commit to serving our neighbors…During my time in public service, I have stood on the shoulders of the great men and women of the Civil Rights Movement, and it is an honor to continue the struggle  for  equality and  justice today, hand in hand with people of goodwill from many traditions, faiths and  backgrounds. Malcolm X was a powerful  voice for  the values that should unite all of us – Christian, Muslim, of any other faith or of no faith. I draw strength from his words of clarity and action.

Malcolm X’s birthday has legal status only in the city of Berkley, California. Earlier this year, New York state passed a one-time resolution to “commemorate the 90th birthday of Malcolm X.” It has also been proposed as a holiday in Atlanta and Washington, D.C. With today’s action, Illinois is the first state to officially declare May 19 as “Malcolm X Day.”

The wording of the resolution “encourages the citizens of Illinois to pay tribute to the life and works of Malcolm X through participation in community service projects on this day.” All communities in Illinois will be able to honor Malcolm X “who died to uphold the universal message of human rights for all and that every human being has the right to dignity and rights in the country they live in.” Malcolm X encouraged people not only to be involved in community service, but also to fight for social justice for all people. In this way, we truly will be following the words inspired by Malcolm X that can be found in the resolution:

Malcolm X’s contributions to society [underscore] the value of a truly free and equal populace by demonstrating the great lengths to which human beings will go to secure their freedom; “Power in defense of freedom is greater than power in behalf of tyranny and oppression,” he stated, “because power, real power, comes from our conviction which produces action.”