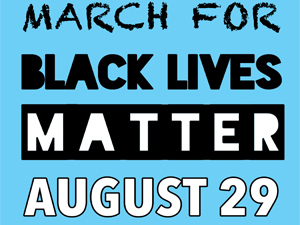 As a logical follow-on to its successful initiative to pass a resolution designating May 19 as “Malcolm X Day” in the State of Illinois, the Council of Islamic Organizations of Greater Chicago (CIOGC) is supporting and mobilizing for the August 29 mass march for community control of the police. The march was initiated by the Chicago Alliance Against Racist and Political Repression (CAARPR) who have been fighting for a Civilian Police Accountability Council (CPAC) for many years. Now with the momentum built by CAARPR, Black Lives Matter Movement, We Change Genocide, Fearless Leading by the Youth (F.L.Y.), and many other organizations – the demand for civilian control over the Chicago Police has grown into a mass movement of solidarity between community organizations in the city. With the CIOGC being a federation of over 60 greater Chicagoland Islamic organizations representing over 400,000 Muslim Americans, the Chicago Muslim community is actively helping to mobilize for this march.

Frank Chapman from the Chicago Alliance Against Racist and Political Repression (CAARPR) describes the campaign his group is leading for an elected Civilian Police Accountability Council (CPAC).

This is not a “review” board, but an “accountability” council to be sure that victims of police crimes receive justice…It’s not only controlling how the police are policed, but also how our own communities are policed.

Together with representatives from multiple community organizations, CAARPR has drafted a CPAC ordinance for the City Council that includes the responsibility for investigating all police shootings and allegations of police misconduct. The group is calling for a mass march to Chicago City Hall on August 29 to demand an all elected Civilian Police Accountability Council. The last planning meeting for the march had representatives from over 65 organizations including the CIOGC.

The draft resolution for the Civilian Police Accountability Council (CPAC) has the following important components.

The resolution is a response to a history of unjustified police shootings; the torture of over 200 suspects under former Chicago Police Department (CPD) detective and commander Jon Burge, and the over 3,500 suspects, 82% of which are black, interrogated at the CPD’s Homan Square facility. In its statement of support for the march, the CIOGC explains further some of the reasons it is encouraging all Chicagoland area Muslims to participate.

“CIOGC encourages the Muslim community join a mass protest on Saturday, August 29th, at 12 noon for a march from the Chicago’s Federal Building to City Hall to demand that the City Council enact legislation to create an elected, civilian police accountability council…This march coincides with the #BlackLivesMatter movement and the teachings of the Prophet Muhammad (peace be upon him) who used coalition building as a major strategy in his efforts for peace.

The Chicago Police Department (CPD) has shot 400 people in the past eight years, but city officials have declared that only one of those shootings was unjustified. More recently, the Chicago Police Department and City Hall have come under scrutiny for detainment and acts of torture at the Homan Square police warehouse interrogation facility. Furthermore, Chicago has ranked at the top of the list for fatal police shootings in major U.S. cities.”

Representatives from the CIOGC have made announcements about the march and handed out fliers at area mosques and community centers over the last few weeks. The organization also created this video appealing to the Muslim community to “March together in solidarity with Black Lives Matter for a historic march. Just doing two things: standing together in solidarity and ask the City Council to pass a law to establish civilian oversight over the Chicago Police.”

Tabassum Haleem, Executive Director of the CIOGC, reminds those in the Chicago Muslim community that protecting the oppressed in society is a central component of Islam and a way to act in solidarity with all people of faith.

“As with all great religions, Islam calls upon its followers to not only acknowledge one’s relationship with God, but also with fellow human beings.  Similarly prayer and remembrance of God is only a small part of worship, while the calls to action are numerous, firm, and inclusive of all of humanity.  Protecting individuals against oppression in all its forms is one of those clear mandates, whether it’s economic, political, social or legal.  Like many cities in the U.S., Chicago faces challenges of inequities and inequality that affect too many of our brothers and sisters.  Therefore, it is incumbent upon all Muslims to initiate, participate in and collaborate with any effort that removes oppression and creates an environment that allows all of us to reach our highest potential and live with the dignity bestowed upon us by our Creator.”

As the unified voice of Chicago Muslims, CIOGC found in the BlackLivesMatter Rally and March an opportunity to partner with people of faith to act against oppression and injustice.  As the Qur’an reminds us:  “You who believe, uphold justice and bear witness to God, even if it is against yourselves, your parents, or your close relatives. Whether the person is rich or poor, God can best take care of both. Refrain from following your own desire, so that you can act justly–if you distort or neglect justice, God is fully aware of what you do.”  Qur’an 4:135 Surat An-Nisā’ (The Women) 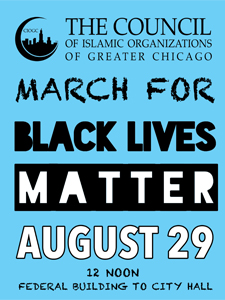 The March for Community Control of the Police is a significant event in Chicago’s history. Multiple communities in the city, led by grass roots organizations and by youth of color, are demanding an end to police injustice by calling for the communities themselves to manage law enforcement.

As Imam Abdul Malik Mujahid, Volunteer Chaiman, Justice for All, says in the video:

Once again, the March for Community Control of the Chicago Police will be on Saturday August 29 at 12:00PM.  The march will start at Federal Plaza, Adams and Dearborn, and end at Chicago City Hall.

How to Support Chicago Black Lives