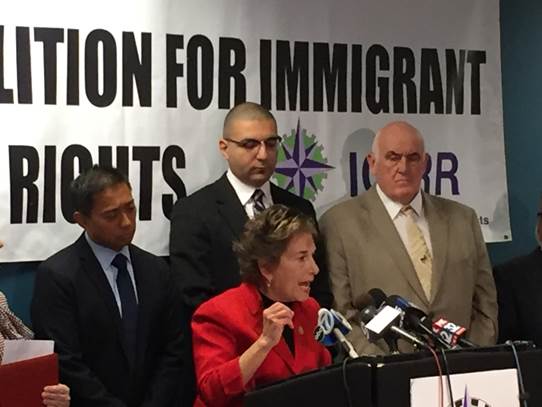 On Friday, the Illinois Coalition for Immigrant and Refugee Rights (ICIRR) held a press conference at their office and were joined by US Representative Jan Schakowsky, Suzanne Akhras Sahloul of the Syrian Community Network, multiple faith leaders, immigrant advocates and two families of Syrian refugees. All were there to demand that Governor Rauner change his position and show compassion for Syrians refugees fleeing the devastating war in their country.

After the terrorist attacks in Paris, Governor Rauner stated that the State of Illinois was temporarily suspending the acceptance of any new Syrian refugees into the state. Although Governor Rauner, or any governor, does not have the power to decide where refugees are settled, the governor’s statement has contributed to an atmosphere of fear and hostility toward the besieged Syrian refugees. In addition, the House passed by a wide margin a bill to place extreme restrictions on the admittance of Syrian refugees that if implemented would halt them coming to the U.S. completely.

Lawrence Benito, CEO of ICIRR, said to start “That we stand with our allies in the faith communities and are disappointed to see these knee jerk reactions to the attacks in Paris. We want our Muslim brothers and sisters to know that you are not alone, and we stand with you. We call on our allies and the general public to hear the words of our speakers and to contact our elected officials to do what’s right.”

“We stand in opposition to any action whose ultimate goal is to instill fear in the hearts of society and turn us against ourselves and our values that we have embraced for centuries” said Ahmed Rehab, Executive Director of the Council on American Islamic Relations (CAIR) – Chicago. “Even France welcomed 30,000 refugees and refused to take the bait. Here we have taken the bait and fed into xenophobia and Islamophobia…It’s time for us to stand up for our true values because it’s our embrace of Jews, Muslims, Christians, blacks, Latinos, and people of all kinds that make us great.”

US Representative Jan Schakowsky had attended a meeting earlier in the day with Governor Rauner’s deputy chief of staff. With her at the meeting were the ICIRR staff and Suzanne Akhras Sahloul of the Syrian Community Network. They presented their arguments for the Governor to change his position. “Today we let the Governor’s staff know that refugees are just like you and I,” said Suzanne Akhras Sahloul of the Syrian Community Network. “We requested on the behalf of refugees that the Governor sit down with one of our families to gain understanding and get to know us.” From the questions asked afterwards, there was clearly no commitment from the Governor’s office to change the position.

US Representative Jan Schakowsky spoke out strongly against the Governor’s actions and the House of Representatives bill that she voted against. “The State of Illinois has long been a welcoming place for refugees and for immigrants and shame on you Governor Rauner for saying we will not take refugees.” Representative Schakowsky also shared what a strong personal issue that this rejection of refugees fleeing persecution was for her.

“This issue has special significance for me as a Jew. Jews tried to escape the Holocaust and come to these shores. The ship “St. Louis” filled with Jewish refugees from Europe in 1939 was turned down by Cuba and then came here only to be sent back to Europe where over a quarter died. After Saigon fell, two hundred thousand refugees were airlifted…We have taken in refugees from around the world – that’s who we are. I’m proud of the Chicago City Council for reaffirming us as a sanctuary city.”

Representative Schakowsky also reminded everyone that the existing program for refugees involves multiple levels of security that can take as long as three years. Syrian refugees are subjected to an even further level of investigation. “The Syrian refugees who have come here are mostly women and children, only 2% have been men of fighting age.” She also acknowledged that even though the governors do not have the power to change where refugees are settled, there is the potential for the House to try and cut off funds for refugee settlement. Ahmed Rehab noted that Governor Rauner has already cut funds for resettlement agencies in the state and could continue with that policy.

Father Larry Dowling, Priests for Justice, Archdiocese of Chicago, continued the theme of all the faith leaders at the press conference “We have to reject the politics of fear. Our faith believes in compassion for the stranger. We stand with all faith traditions that extend mercy to those in need. Our politics need to reflect our basic values and we demand our politicians do the right thing for all who seek safe haven here.”

“All people are members of the family of God,” reiterated Reverend Michael Mann, United Methodist Church, “Jesus and his family were refugees. When they were threatened, they found safe haven in Egypt.”

Doctor Mohammed Kaiseruddin, Chairman, Council of Islamic Organizations of Greater Chicago (CIOGC), spoke about how “inviting refugees to our country is to our own benefit.” He described the vetting process that refugees go through before they even get here and that many have died on the way. He stressed, “Do the right thing. Be welcoming.” He noted that there is a growing hatred of Muslims in this country and described the two Muslim men who had just been taken off a plane at Chicago’s Midway Airport when someone felt “threatened ” because they were speaking Arabic. He also described how the men stood up for their rights, called 9-11, and demanded to be cleared right away so they could still take their same flight home to Philadelphia.

“This is a place people can come and be welcome from all communities,” said Jane Ramsey, Director of Just Ventures and Jewish community leader. “I join Representative Schakowsky as a Jew to urge Governor Rauner to find his heart and reverse his decision. As Jews we remember our terrible history when we tried to come to this country and some were let in and others were sent back to certain death.”

After the speakers, there were two families of Syrian refugees who were questioned by the press. Both families had been settled in the Chicago area. One of the families, Ismil and Sufa Alrifai from Homs had escaped when their city was bombed, walked to Jordan, where they waited for two years before being granted asylum in the U.S. Ismil was injured and is still getting treatment. Sufa said they felt welcomed here. “We just want to be here in a peaceful and safe place. We want an education for our children.”

The final call to action by ICIRR was expressed in their press release.

“ICIRR and the diverse allies represented at today’s call to action are urging the Governor and all city, state, and national  leaders to reject the reactionary and fearful policies currently being considered.  Immigrants who are accepted into the US are protected by the Constitution and federal law, and Syrian refugees should be welcomed into the communities of Illinois with open arms.”