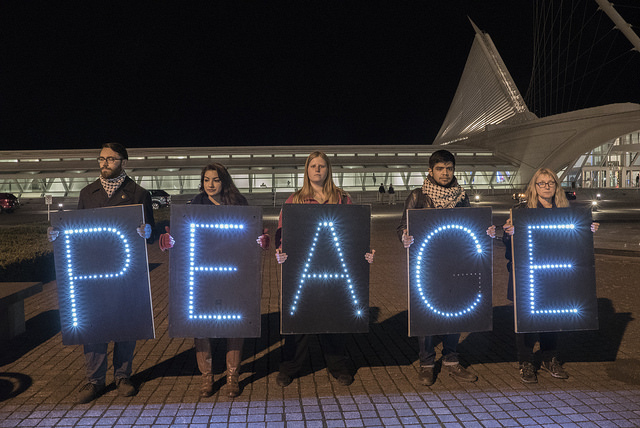 Dozens of local groups organized and supported a gathering in downtown Evanston expressing solidarity with Muslim Americans. The crowd began to swell past 100 attendees at Fountain Square on Sunday afternoon as multiple speakers rallied against Islamophobia.

Event coordinator, and member of Jewish Voice for Peace, Lesley Williams emceed the rally. Dr. Aila Ammar of the Muslim Community Center and People Encouraging Acceptance through Communication and Education (PEACE) spoke first and was followed by Renner Larson, Communications Director of the Council on American-Islamic Relations (CAIR) – Chicago.

Their speeches heavily condemned the recent surge of violent and bigoted political rhetoric aimed toward Islam and Muslims. Larson commended the unity and power of recent protests at a Trump rally in Chicago. He also urged the crowd to get involved in local politics and government.

Jes Scheinpflug of Open Communities pointed to the need for solidarity among all identities regardless of religion, sexuality or race. Later, Tarek Khalil of American Muslims for Palestine implored crowd members to support one another in times of adversity and discrimination. He invoked a quote from Protestant Pastor Martin Niemoller’s post-WWII lectures:

Earlier this month, two Northwestern University students accused of spray-painting racist and homophobic messages in a chapel on campus were charged with vandalism and a hate crime.

Tahera Ahmad, an associate chaplain at NU, condemned the actions of the students. She invited crowd members to join her in a discussion on Islamophobia at the Evanston Public Library on Monday night considering this incident and similar ones across the country.

After invocations from Dr. Ammar and Rabbi Davis, organizers in the crowd formed groups to flyer for a poster campaign. Crowd members were encouraged to join groups with unfamiliar faces and get to know one another. The groups were assigned streets in downtown Evanston and asked businesses to post signs reading “Refugees Welcome” and “All are welcome here.” 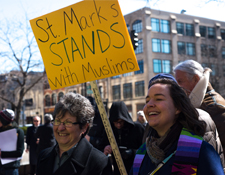 This is the second anti-Islamophobia event in Evanston spearheaded by Lesley Williams. In December, Williams organized a similar rally in Fountain Square.

Open Letter to the Muslim Community on the Orlando Shootings