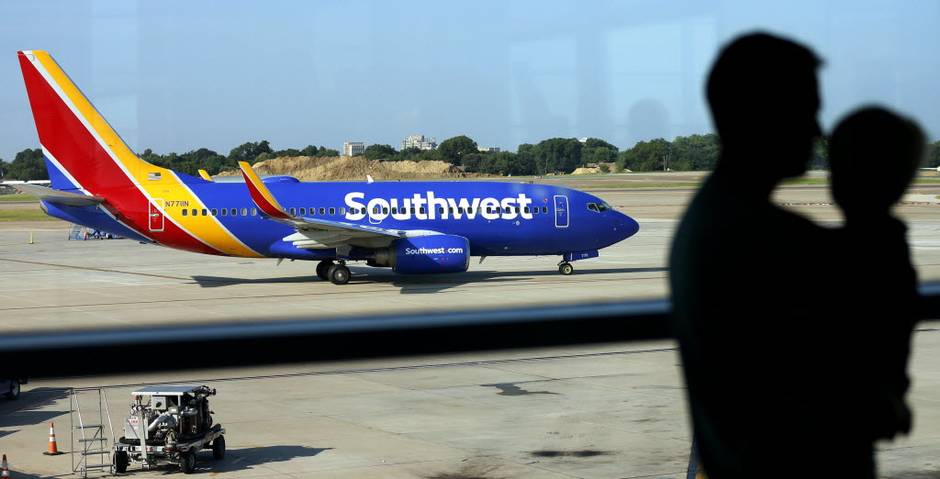 On Wednesday morning, Southwest Airlines held its annual shareholder meeting in downtown Chicago. This year the stockholders were greeted by Arab and Muslim groups who were protesting the trend of anti-Muslim and anti-Arab incidents on Southwest Airlines flights. The groups also showed solidarity with the picketing pilots, flight attendants, and mechanic union members.

In the latest incident of Arab and Muslim profiling, Southwest initially allowed a man to walk away after he assaulted a woman and pulled off her hijab during a flight yelling “Take it off! This is F&%$#&% America!”, only calling the police after the victim insisted. In multiple other incidents, Southwest Airlines staff were quick to remove Arab, Muslim, and other passengers from flights for speaking Arabic or making others feel  “uncomfortable.”

Even with a strong response and thousands of signatures on a petition, Southwest has either been silent or released statements that promote their concern for passengers’ “safety” and have avoided taking any responsibility for their staff’s bigoted and discriminatory actions.

In November of last year, Maher Khalil and Anas Ayyad, who both moved to Philadelphia 15 years ago from Palestine, were speaking Arabic before their flight in the Chicago Midway Airport terminal when another passenger on their flight approached the gate agent, demanding they be removed from the flight. The agent agreed and told the men that they wouldn’t be allowed to board because a passenger was said he was afraid to fly with them.

After this incident and another at Chicago Midway Airport in the same month when Muslims were removed from Southwest flights, the airlines gave the following official response:

“We wouldn’t remove passengers from flights without a collaborative decision rooted in established procedures…We regret any less than positive experience onboard our aircraft.…Southwest neither condones nor tolerates discrimination of any kind.”

This response is clearly corporate double speak that absolves their employees of any blame for discriminatory behavior and the airline itself for any clearly flawed procedures.

In April of this year, Hakima Abdulle was wearing a hijab on a connecting flight from Chicago to Seattle trying to change seats. She was kicked off the flight after complaints by another passenger who said that Hakima made her “uncomfortable.”

In another case that month, an Iraqi student was removed from a Southwest Airlines flight for speaking Arabic. Khairuldeen Makhzoomi, a senior at the University of California, Berkeley and an Iraqi refugee, was escorted off his flight by an Arabic-speaking Southwest Airlines employee after another passenger heard him use the word “inshallah,” or God willing.

Protesters at the stockholders meeting focused on a petition with 20,000 signatures sent to the company in April and an open letter to CEO Gary Kelly signed by over 50 organizations that there can be no business as usual while Arab and Muslim communities are unsafe on Southwest flights. They are still waiting for a response from Southwest management.

Kalia Abiade from Center for New Community, an advocacy and research organization, described how her organization fights the perception that organized racism is a thing of the past. She stated that the actions of Southwest Airlines and the Trump campaign demonstrate that anti-Black and anti-Muslim sentiments are very much still major issues.

Dalia Hassaballa, a Board member of the Muslim American Society Chicago, was representing her organization’s focus on the vision of a virtuous and just society that doesn’t include profiling Arab and Muslim passengers on Southwest flights.

“Injustice anywhere is a threat to justice everywhere.” We are here to stand along side of the Muslim community to protest Southwest Airlines disgraceful enabling of anti-Muslim racism and profiling.

From North Carolina, Manzoor Cheema, a member of the Movement to End Racism and Islamophobia, made the connection between the protestors and the pilots, flight attendants, and mechanics picketing for better pay, benefits, and working conditions.

“Islamophobia is a product of a crisis in America where groups are marginalized and scapegoated to distract from labor issues and worker’s rights. It’s long been a “southern strategy” to divide labor and worker progressives. While Muslims are being kicked off planes, the corporation is abusing its workers. Merging these forces fighting against anti-Muslim profiling and for workers’ rights is important to achieve real change.”

In a press statement, SWAPA indicated

“Over the past four years, Southwest shareholders have been rewarded with $3.1 billion in stock buybacks while the pilot group has not had a raise since 2011. SWAPA and Southwest Airlines are currently in federal mediation.”

Justin Madden, National Secretary/Treasurer of AMFA, described similar issues that the mechanics have with Southwest management.

“AMFA joined in this picket to show solidarity among the mechanics, pilots, and flight attendants

in expressing displeasure with the company’s apparent lack of priority on getting a deal done with our respective labor groups. AMFA has been working without an amended contract for almost four years and we are frustrated with the pace of negotiations. In these times of record profits, instead of rewarding the productive employees whose efforts have led to its success, the company seeks what amounts to concessions in the contract that our members will not accept.”

This protest shows that that Southwest Airlines is not only failing to protect its passengers from anti-Arab and anti-Muslim bigotry, but also is not treating their employees with respect and fairness.

Like the Southwest Airlines pilots, flight attendants, and mechanics, the Arab and Muslim groups are also waiting to hear back on their grievances from a thus far very unresponsive Southwest management.

The Not So Innocent