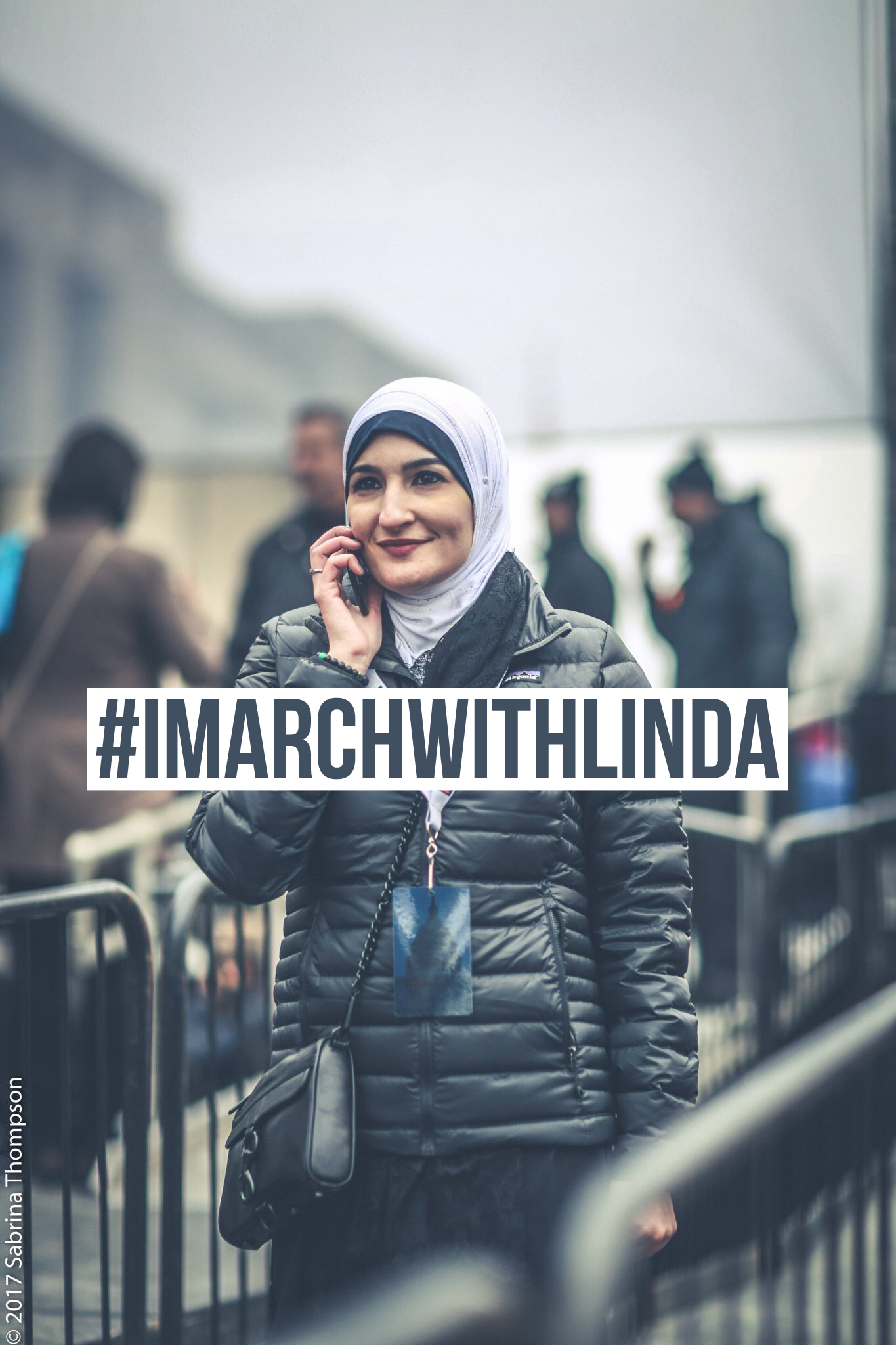 Linda Sarsour is exactly what every white supremacist has nightmares about: a strong, fiercely unapologetic, hijab-wearing, Muslim, Palestinian woman who is determined to fight for justice. So what happens when you co-organize the largest march in USA history and declare, in front of millions, that you are “unapologetically Muslim American, uapologetically Palestinian American, unapologetically from Brooklyn” and defiantly “not afraid”?

Well, the alt-right/white supremacists of the internet will turn to the only thing they are good at: making up utter bullsh*it. Or, as their own Kellyanne Conway so eloquently coined for us: “alternative facts.” Trying to viciously smear civil rights activist Linda Sarsour as (you guessed it) connected to terrorism or “pushing Sharia.”

After helping coordinate one of the most successful marches in history, Islamophobes are viciously attacking @lsarsour #IMarchWithLinda pic.twitter.com/tNuq67nwru

As people of color know, the new regime has emboldened and encouraged the trolls, fear-mongers, and bigots of the world. This type of harassment is of course not new, but it definitely cannot become normalized, accepted, or ignored.

But it seems the world has learned a thing or two about standing up and standing together against hate mongering. Civil rights activists, marchers, community organizers, a presidential candidate, journalists, national organizations, celebrities and everyday people from across the internet rose up in solidarity with Linda, making the #IMarchWithLinda hashtag trend globally!

Thank you @lsarsour for helping to organize the march and build a progressive movement. When we stand together, we win. #IMarchwithLinda

Not this time, trolls. I stand with the incredible and inspiring @lsarsour. In defiance. Indivisible. #IMarchWithLinda

We are proud to have @lsarsour as our co-chair. We will always have her back. #IMarchWithLinda pic.twitter.com/YyF4DEmxZ4

Women leaders like @lsarsour bring us hope and we must stand with our Muslim friends right now. #IMarchWithLinda https://t.co/BmZbzOYgZx

#IMarchWithLinda because she epitomizes the essence of the Palestinian spirit. @lsarsour we got you!

#IMarchWithLinda because she is an inspiration for the kind of leadership this country needs. Compassionate, selfless, loving and inclusive. pic.twitter.com/dqTmu8v66Y

Through years of bringing people together, @lsarsour has done more 4 America than all the bigoted internet trolls combined #IMarchWithLinda

Islamophobes have been attacking #WomensMarch organizer @lsarsour. We stand with her against this type of hate and bigotry. #IMarchWithLinda

#IMarchWithLinda bc we can’t let the “alternative facts” of fascists erase this beautiful woman who fights for all of us.

#IMarchWithLinda because she is intersectional activism personified.

.@lsarsour is unapologetically Muslim, Palestinian & from Brooklyn. She’s also an advocate & champion for ALL OF US. #IMarchWithLinda ✊🏽 pic.twitter.com/XP4x9nOhrN

.@lsarsour: a strong voice advocating for women’s rights & understanding what Muslim women face. Haters will not divide us. #IMarchWithLinda

There are few people I trust, support, learn from & lean on more in this work than my Sister @lsarsour #IMarchWithLinda pic.twitter.com/diLjYMcJkf

CAIR-Chicago stands with @lsarsour as an incredibly important and strong Muslim woman whose work will inspire generations. #ImarchwithLinda

Hey, my sister. These bigots are only making you MORE famous. Because this movement LOVES you. We got your back!! Keep shining, @lsarsour! https://t.co/zR4wjyHKew

#IMarchwithLinda because .@lsarsour has put her life & her body on the line to stand up for me & mine. #Womensmarch https://t.co/0j9O8SgBOB

Here’s the truth. @lsarsour is one of the most effective, skilled, passionate organizers in the world.

.@lsarsour We see you, sis. Black Lives Matter has your back — today and every day. #IMarchWithLinda

Dalia Mogahed sums it all up for us:

When, like @lsarsour, what you do counts & you stand courageously for the oppressed, cowards attack you. #IMarchWithLinda

Want to show your solidarity? Tweet your own message of support using the hashtag #IMarchWithLinda.