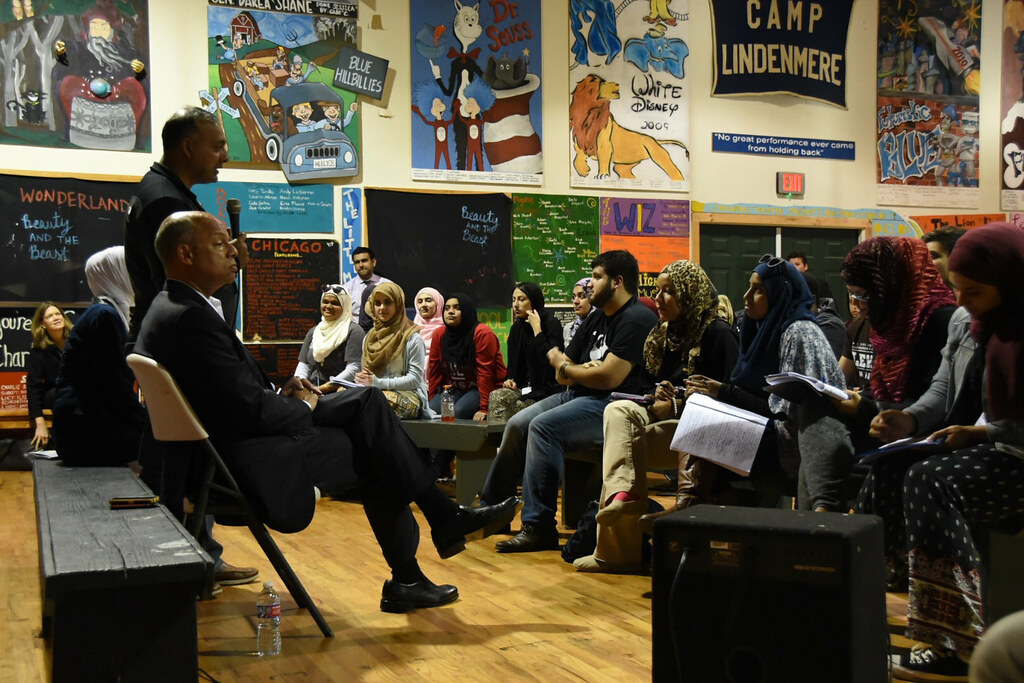 Across the timeline of American history, colleges and universities birthed the beginnings of revolution. In 1964, students at the University of California at Berkeley started the Free Speech Movement, protesting policies that restricted their free speech and academic freedoms. 1965 saw the initiation of “teach-ins” when professors at the University of Michigan protested against the Vietnam War by bringing their sentiments into the classroom and demonstrating between periods. Students at New York University took to the streets of campus to protest their staggering student loan debt in 2013. Following the presidential election of 2016, protests erupted on campuses across the country, under the hashtag #LoveTrumpsHate.

Young people find activist centers on, in, and around collegiate institutions, and this is what allows such powerful movements to take root. Safe spaces–and the community organizations that provide them–are vital to the legacy of activism in the United States. Muslim students are no strangers to this concept–the first Muslim Student Association (MSA) was founded in 1963 at the University of Illinois at Urbana-Champaign with the same intentions.

Since the 60s, MSAs have grown and expanded across the country. “Our MSA serves as an organization that facilitate[s] a community for the Muslim students through social and spiritual events,” says Ummesalmah Abdulbaseer, past MSA President at the University of Illinois at Chicago.

“We’re just a student organization like the many others…[but] we are also a representative body of all the Muslim students on campus. Thus, we advocate for the needs of 15% of the university. So in addition to planning events and dinners to ensure people get to meet new people and celebrate their Muslim identity, we try to improve accommodations for Muslim students on campus as well as see what causes in the community we can help advocate for.” [sic]

UIC’s Muslim Student Association is currently the largest in the country, with more than 1,000 members, and is known for its dedication to activism in the community. Annual events include Discover Islam Week, a week of events including charity efforts, fundraisers, and panel discussions to introduce Islam to new audiences and conquer existing misconceptions, and semesterly banquets and dinners to bring together Muslim students on campus and offer a space for them to connect and build relationships.

“So much of the world is hurting and it’s important to recognize that and increase awareness, and do our part to help, whether it’s trying to raise funds, passing out flyers, or posting on social media. It’s our duty as Muslims and as Americans to stay involved and do justice for our communities,” explains Abdulbaseer, on UIC’s commitment to activism and social justice.

In the past, the MSA held protests and vigils in response to current events, and engaged in community service across Chicago.

Other MSAs have similar ideals, but approach them differently. The Muslim Student Assocation at Illinois Institute of Technology, for example, is smaller than UIC’s. It’s more engaged in promoting student-oriented activism.

“We held a mental health panel event, which was significant because mental health is a serious issue for both Muslims and non-Muslims. It usually is not addressed in the MSA, so I was very happy that our MSA was able to hold this event with three qualified speakers,” says Heshaam Latifi, current MSA President.

“Events like this [have] the benefit of addressing the issue by showing where help can be reached as well as unifying students on campus who have similar problems.” By providing a safe space for Muslim students to reach out and connect with others, the MSA gives them the support and platform they need to better serve their communities. I’ve grown in my goals,” says Latifi.

“I was more focused on making a change in my community but after meeting people and working with the Shura [board]…my goals have become more globally oriented, and I know how important this is in the world we live in today.”

“We definitely encourage activism among the student community, but we haven’t actively initiated our own efforts as a student organization. We advertise to our forums and encourage participation in local organizations that do a wonderful job with serving the community and Muslims,” says Zeeshan Khan, MSA President at the University of Chicago.

UChicago’s MSA is one that puts more emphasis on students and community, encouraging activism but on a more individual scale. Students are given a space to embrace their identities and learn about themselves and the community they belong to, and activism is promoted as a natural next step.

Historically, Muslim Student Associations have spawned their fair share of movements and campaigns. 1982 saw the founding of the Islamic Society of North America (ISNA), an organization that leads interfaith dialogues, coordinates with mosques across the country, and hosts a yearly convention for American Muslims. ISNA has since branched off into several subsidiary organizations, each with clearly defined goals to promote activism and community growth.

“Within the United States, a lot of activism has come out of university settings. MSAs being positioned within that culture are wonderfully positioned to bring about changes, especially considering the diversity that goes into MSAs. It is a great opportunity for Muslim students to get involved and enact social change,” says Tariq El-Amin, resident Imam of Masjid Al-Taqwa, host and producer of Radio Islam, and co-founder and Executive Director of Bridging the Gap, a nonprofit organization that focuses on promotion education, service, and leadership in the community.

El-Amin works closely via Bridging the Gap with DePaul University’s Muslim Student Association to host events and encourage dialogue between communities. El-Amin considers himself an activist in a broad sense–he places more emphasis on social and community development than political engagement. “I hope to inspire those I come in contact with, regardless of their identity, to see their capacity to contribute to the establishment of peace, justice, and equity in society.”

This mirrors perfectly the goals of Muslim Student Associations across America. In a time of increasing tension and polarizing ideas, these organizations strive to make a place for American Muslims to engage with issues that matter and impact them, protest and promote change, as well as find and develop their identities within an ever-growing and diverse community. Activism begins as an idea, but it finds its roots in people, and this is what MSAs everywhere stand for.