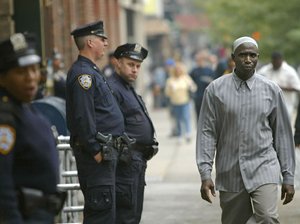 Since September 11, 2001 the U.S. government, along with the NYPD began to investigate various mosques and Muslims in the U.S., focusing on Shia Iranian Muslims in New York City.

According to the AP article released on February 2, 2012 the NYPD Secret Intelligence Strategy Report for the Police Commissioner Raymond Kelly, titled “US-Iran Conflict: The Threat to New York City.” The NYPD is prohibited under its own guidelines and city law from basing its investigations on religion. Under FBI guidelines, which the NYPD says it follows, many of the recommendations in the police document would be prohibited.

One of the points made in the report which was written May 2006, was that Hezbollah serves as a potential threat via Lebanese nationals based in New York City (pg 6). In the report on Hezbollah, there is a Shia center which is cited multiple times, the Al-Khoei Center which has close ties to Fadhel al-Sahlani, the Imam of Al-Khoei.  The document goes on to claim, “The Iraqi-born al-Sahlani is alleged to be the highest Shi’a religious authority in North America.”  Not only does the document lack sources and citations for any claims, the previous sentence could not be further from the truth.

Upon further investigation, not only was Fadhel al-Sahlani not well-known among Shia Muslims (Iranian or otherwise) in the United States but also that the idea of a “highest Shi’a religious authority in North America” is a completely objective representation in a sect of Islam which does not hold any particular hierarchy amongst its scholars.

According to Sayyid Sulayman Ali Hasan, a Shi’a scholar affiliated with Baitul Ilm community in Streamwood, Illinois, “there is no highest Shi’a religious authority in North America,” and “the people who make these documents like to exaggerate such facts.” Furthermore, after interviewing other Shiites in Chicago and New York, it was learned that al-Sahlani is not well-known among Shiites in other communities outside of New York City.

This is just one example of the many false statements made in the NYPD report on the “threat” of Iranians in New York. Due to the extreme nature of the exaggerations and jumps to conclusions made in this document, CAIR-Chicago is currently further investigating the entire 10-page report and many of the institutions and groups which are named as “allegedly” supporting terrorism and various terrorist organizations.

The document does not just leave the blame on Iranian-Americans, but it also calls for the investigation of Palestinians in New York. The document reads, “The Palestinian community, although not Shi’a, should be also assessed due to the presence of Hamas members and sympathizers and the group’s relationship with the Iranian government.”  This statement is followed by showing US Census data which shows 3,100 Palestinians residing in NYC.