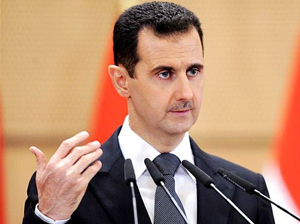 Bashar Al-Assad sounds like someone who is running out of excuses. In a December 2011 interview with Barbara Walters, Assad’s calm exterior reflected not his discomfort about the probing questions he was being asked, but that he is a very capable liar—or that he lives in his own fantasy world.

Foreign media outlets are currently barred from entering Syria.  However, because Assad did grant an interview with Walters in December, we are able to delve a little deeper into his mind in order to better understand the reasons behind the Syrian government’s continued violence against civilians.

In his discussion with Walters, the Syrian president blamed the military for the deaths of the 5,400 protesters killed; all the while insisting that he is not in charge of the military.

“They [military] are not my forces, they are military forces belonging to the government,” said Assad.

If the president of Syria doesn’t have command over the Syrian military, then who does?  After all, the military is a government institution that defends its country when ordered to do so by a higher authority like the president.

While denying his personal involvement in the 11-month violent crackdown on protesters, Assad insisted that his previous position in the Syrian military is how he became president—not because he inherited his leadership from his father before him.

“I was a military doctor and according to our laws, that military law, you can move from how to say sector to sector within the army,” stated Assad as the reason why he became president.

Contradictory to his statements, he accredits his presidency to the very same institution that he denies being associated with.  From Assad’s point of view, this couldn’t possibly be a story of inheritance, but a glorious story of hard earned achievement.  Climbing the institutional ladder to leadership was just a good cover-up story.

The current reality is that the majority is fighting against the elite ruling minority, the Alawites, a sect that is loyal to Assad’s father.  Previously, Assad Sr. had killed at least 10,000 people in the city of Hama for similar anti-government protests.

Assad, following in his father’s footsteps, is doing exactly what a dictator might do ruling in his family’s dynasty.

In his interview, he is incapable of imagining another president in his place and is quick to reaffirm that he has always had the support of the people. This is evident in how he avoided answering questions directly.  When he was asked about the possibility of not getting re-elected he said:

“For me Syria [i]s a project, [a] project of success, if you don’t succeed you don’t have to stay in that position and that success again depends on the public support without public support you cannot, whether you are elected or not.”

Syria as “a project of success” doesn’t really tell us about the consequences of Assad not getting re-elected.

At the same time, Assad alleges that since his party is the strongest in Syria, others would not be able to succeed in securing the position of president.

“We have opposition but it takes time to have strong opposition,” said Assad.

Yes, it does take time – because as long as there is a dictatorship in Syria, the point is to not have “strong” opposition or any opposition for that matter.  According to Human Rights Watch, Syria’s security agencies, “the feared mukhabarat”, detain, arrest, and torture figures like human rights activists and journalists “with complete impunity” if they dare speak out.

In this case, maybe Assad’s belief that he has the “support” of the Syrian people should actually be synonymous with the intimidation, fear, and censorship imposed on them as well.

The state-run Syrian Arab News Agency (SANA) and Assad continuously cast the protesters fighting for their basic freedoms as “armed terrorist groups which are backed by foreign sides.”

And, when pressed to confront all of the evidence and pictures of military violence, Assad called them “false allegations” and a “distortion of reality.”

Well, of course these allegations wouldn’t be reflected in the Syrian media, because under the 2001 Press Law that Assad passed when he took office, it would be illegal to write or speak out in any way against the government.  Speaking out would lead to being taken away from one’s family, jailed, and/or killed.

His “reality” seems to be a reality unconnected to his actions, and the Syrian people are suffering because of it.

Furthermore, in light of the double veto from Russia and China against a U.N. resolution in Syria, Assad seems to have stepped up the violence with hundreds reportedly killed earlier last week.

While Assad may delude himself by thinking that he has the people’s support, and while he might think that the very military that made him president is not controlled by him, the thousands of protesters being killed tell us otherwise.

To watch the full interview with Bashar Al-Assad, click here.