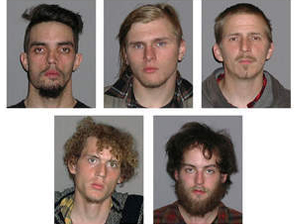 The way in which a story is told through the use of specific terminology is crucial to the impression it leaves upon its audience.  For this reason, the Chicago Tribune’s recent coverage of five Cleveland men arrested for attempting to blow up a highway bridge in the Brecksville, Ohio area is problematic.

Possibly the most troubling aspect is that The Chicago Tribune allows these men to self-describe themselves as “anarchists”. The problem here is not that the men claim to be “anarchists”, but that The Chicago Tribune gives the opportunity to the five men to label themselves as they wish. By definition, the five men’s plot to blow up the Brecksville, Ohio bridge is an act of terrorism; and thus, the five men should be labeled as terrorists.

There is a recurring problem in mainstream reporting on terrorism; when non-Muslims plan and/or execute acts of terrorism, the people involved and the crimes they are involved in are not labeled as such. In the media, the term “terrorism” has become a racially, ethnically, and religiously-charged one; and for the most part, it has become synonymous with Islam and Muslims.

The F.B.I defines terrorism in its Code of Federal Regulations: as “the unlawful use of force and violence against persons or property to intimidate or coerce a government, the civilian population, or any segment thereof, in furtherance of political or social objectives.”

When these men are quoted as saying that their “goal was to spread rioting and destruction in every major city” and “were intent on using violence to express their ideological views,” one has to wonder why the Tribunewould be so hesitant to call them terrorists.

In fact, the only time the word “terrorism” is introduced to readers explicitly is in an assurance at the end of the article that “the group had no ties to foreign terror organizations and the plot was not connected to the anniversary of the death of al Qaeda leader Osama bin Laden.”

In contrast, in an article published just this February, “Cabdriver pleads guilty to trying to aid terrorist group,” the Tribune freely uses the term and, perhaps most importantly, fails to allow the accused, a Pakistani native named Raja Lahrasib Khan any self-description or explanation – opting rather for the second-hand statements of the prosecutor and defense lawyer.

This contrast is by no means accidental.  A pattern in the reporting of Muslim and non-Muslim acts of terrorism has emerged that shows the word “terrorism” to be religiously and racially-charged, especially in a post-9/11 culture.

When it comes to non-Muslims who commit criminal acts fitting the F.B.I.’s definition – Norwegian bomber and shooter Anders Breivik, Army Staff Sgt. Robert Bales, and Oklahoma City bomber Timothy McVeigh – media outlets do not make links to their religion, race, and/or ethnicity when speculating on the motives behind their crimes. For example, Breivik is an “extremist,” Bales is a “soldier strained by deployments,” McVeigh simply had “violent anti-government views.”

Of course, no act of terrorism is ever justifiable.  Neither is any act “less than” another – less devastating, provoking, morally corrupt. Falsifying a distinction based on racial and religious stereotypes alienates Americans from one another and minimizes crises like the Ohio bomb threat.  The biases apparent in a comparison between coverage of a non-Muslim act of terrorism and one associated with Muslims are unjustifiable and should be addressed by media outlets.