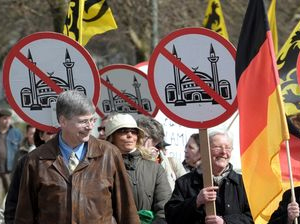 The article, “Hostility Between Muslims and German Nationalists Rattles a Former Capital,” by Melissa Eddy gave a one sided view on the rally in Bonn, Germany between Muslims and German Nationalists. Eddy explained that on May 5, 2012 a right-wing group, Pro-NRW, showed praying Muslims insulting caricatures of their prophet Muhammad, which led to a violent uprising. The article portrayed Muslims as dangerous and at fault for the disturbance of peace. It also described and justified the fear and contempt the residents feel against Muslims. However, it did not explain why the praying Muslims acted so defensively or that Pro-NRW has a history of expressing Islamaphobic ideas.

Eddy wrote, “But after one of the 30 or so rightists climbed…to flash the cartoon at the Muslims…a shower of rocks and shards from smashed flower pots flew at the police in response.” She also quoted Robin Fassbender, who said the Muslims, “just exploded.” This is problematic because it only gives the reader the viewpoint of non-Muslim residents. It makes the Muslims in the situation seem unreasonably violent. Furthermore, the word “exploded” also elicits a discriminatory response from the reader since it implicitly links Muslims to bombs, terrorism and violence.

The caricature was of Prophet Muhammad by Kurt Westergaard drawn in 2005. Westergaard is a Danish cartoonist who drew Muhammad wearing turban that resembles a bomb. It is disrespectful and insulting to the Muslim community to have any drawings of their prophet, nonetheless with him wearing bomb. It is an image that has sparked a lot of controversy in the past because it is used with ignorance and hatred. The illustration has also had a history of causing anger and upheaval from Muslims all over the world. Muhammad holds a sacred place in Islamic belief and is revered by Muslims. It is understandable for Muslims to react this way. Similarly, devout Christians who love and respect Jesus Christ have reacted similarly when their prophet was portrayed sacrilegiously.

The drawing also perpetuates the stereotype that Muslims are terrorists. In fact, less than 1% of terrorist attacks are perpetrated by Muslims. The cartoon is an incorrect depiction of what Islam stands for and encourages Islamophobia and hate. Knowing the controversial and sensitive nature of the image, the Pro-NRW members still decided to show it when they completely understood the response it would evoke. Eddy failed to mention Pro-NRW member’s motives and explain the full context of the situation.

The right-wing group also showed the controversial image during prayer at King Fahad Academy, which has 500 students and a Mosque that is large enough for 700 worshipers. It is also a school that “combines education in Arabic and Islam with a concerted effort to build bridges with German society by increasing understanding of Arab and Islamic culture.” Pro-NRW members came during prayer at the school, making the situation more provocative and emotional for the Muslims involved.

Eddy also made contrasts between Bonn before and after Muslims began to move in the city. She said, “Today Bonn, once tranquil, is a volatile cocktail of social tensions between its Muslim newcomers…and a far-right nationalist group that is mounting a growing campaign against them.” She also mentioned that Bonn likes to “boast of their city’s tolerance.” In other words, she is suggesting that the city was a peaceful and accepting place, until Muslims began living there.

Nowhere in her piece did Eddy hold the German Nationalists responsible for their actions. She explained that the intolerant group had threatened to show the discriminatory caricature to Muslims and the police were ready to block the view to avoid the conflict. But she later quoted Fassbender again, “[Police Officers] are trained to regularly take stones and broken bottles,” he said, “but not to be specifically attacked like this.” Taking the Muslim’s reaction without providing context, Eddy justifies the “angry Muslim” sentiment held by Bonn residents. It implies that Muslims were so violent that not even the police could handle the situation.

Throughout the piece, any quotes from the Muslims involved are practically non-existent. She only quoted Ms. Elbay, a disappointed Muslim woman. “Our image is always being destroyed,” Elbay said, “We do our best to try to live a normal life…and these people come and destroy it.” Eddy again failed to explain what provoked the violence. Here was a prime opportunity to get some insight into the Muslims’ point of view but Eddy’s investigation falls flat. What did Elbay mean when she said her image is always being destroyed? Has this happened before?

Eddy ended the piece with another quote from Hans-Peter Weisz, another resident, “You can understand how a hate against foreigners can grow.” By ending the article this way, the author is encouraging Islamophobia. Once again, Eddy is describing Muslims as foreign, violent and unwelcomed. She is also justifying the resentment the Bonn residents feel against Muslims and furthering the divide between them.

Unfortunately, Eddy’s inaccurate, negative portrayal of Muslims is not uncommon in the media. It is a reoccurring trend that can have negative consequences. One of these consequences is that the image of Muslims, as Elbay puts it, is consistently “destroyed.”