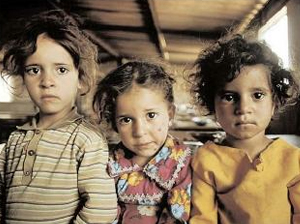 In 1948, the UNGA passed a resolution allowing Palestinian refugees the Right of Return. Resolution 194 asserted that Palestinian refugees have the inalienable right of return to where they had resided before the onset of the War, and that they should do so as soon as possible. In its obsessive campaign to hold a Jewish majority, Israel continues to deny return and has ignored a UN General Assembly that has reaffirmed this right “over 40 times” since its ratification 64 years ago.

This complication is not visible in mainstream media and is completely overlooked in Jennifer Rubin’s Palestinian Refugees and the U.N. Yet the Washington Post writer attempts to justify a proposed congressional bill that will reduce the number of refugees. She claims concern for the “exaggerated” number of refugees and transparency with the U.S. taxpayers on their annual support. She goes as far as asking whether “Islamic states and their partners … want a resolution to the Palestinian issue?” Ironically, it seems that proponents of this bill are, again, giving Israel leave from its responsibility of resolving the refugee issue and thus making it harder to resolve the conflict.

While the present bill does not directly cut support or even change funding policy towards the United Nations Relief and Works Agency, UNRWA, it attempts to disallow the descendants of the original refugees (those removed from their country between 1946-48) to be considered refugees. Rubin agrees with Clifford May when he says, “UNRWA is helping the extremists to prevent peace and continue to wage a war of annihilation against Israel.” But this monumental designation will, once again, allow Israel to get away with denying return to refugees, which is quite the opposite: Israel is attempting to annihilate its refugee problem.

The implications of such a bill are not immediately visible, but there is great concern that if less than 1% of the nearly five million refugees are labeled as non-refugees, future legislation will cut the much-needed support more easily. This number, just over 30,000 Palestinians, comes from the United Nations High Commissioner on Refugees (UNHCR) definition of a refugee. The UNHCR definition suggests that a refugee has been displaced from his or her country. The Palestinians living in camps in Gaza or the West Bank – still in Palestine – have not technically left their country, although they are very deserving of refugee status; that is, they have been forced from their residencies and have taken refuge elsewhere.

The article repeatedly mentions the “exaggerated” refugee problem. The status of the children of refugees has been disputed and is another big part of this supposed exaggeration. With support from Pro-Israeli lobby groups, the “Kirk Amendment”, sponsored by Senator Mark Kirk (R-IL), unjustly disposes of the refugee’s children from the number of refugees. Indeed, they were not among those displaced from their homes between 1946 and 1948, but disregard for Resolution 194 is the reason they have obtained refugee status.

Moreover, proponents of the bill claim they want to ensure U.S. taxpayers are aware of how the UNRWA is spending the United States’ contribution. Rubin mentions the $4.4 billion that the U.S. has given to UNRWA over the last 60 years. Ironically, the United States taxpayers are not aware of how Israel spends its annual $3 billion (12 times the amount contributed to the UNRWA annually) of foreign aid; considering Israel has received such aid unconditionally and has spent it on military practices that have been condemned for repeatedly violating international law, it seems that there is more behind the Kirk Amendment than concern over the meager 250 million tax dollars spent each year. So while Rubin condemns this single “anti-peace policy,” she completely ignores the repeated anti-peace policies of Israel that the United States has generously, and unconditionally, funded.

Fortunately, the State Department has made clear its opposition to the amendment. Deputy Secretary of State Tom Nides, in a letter to the Senate Appropriation Committee that (unanimously) approved the amendment, says that by ratifying the amendment, the United States would be taking a position on a fragile issue and that this would “undercut our ability to act as a mediator and peace facilitator.” It seems likely that the U.S. Congress will not pass the amendment; if it survives both chambers, President Obama would be wise to use his veto power.

The Kirk Amendment is a shoddy attempt at further delaying the resolution of the Palestinian refugee problem, and the conflict as a whole. The negative results of the proposed bill is threefold: (1) greatly reducing the number of refugees will open the door for cutting funding to them; (2) shedding light on the $250 million contribution to UNRWA will only overshadow the bigger problem of the $3 billion of annual aid to Israel that go unaccounted for in the public eye and actually undermine the ability to resolve the refugee issue; and (3) the United States will then be taking a position that reduces its credibility as an honest broker in the peace process.

Before rushing to conclusions about the unique situation of these refugees, there needs to be a deeper understanding of the long history that surrounds the issue. Ms. Rubin advocates for a bill that can lead to damaging results, and allow Israel to continue sidestepping its duties as an occupying force. The United States should promote the rights of these refugees and start forcing Israel to assume its responsibilities. Israeli propaganda, supported by Rubin and others, has falsely flipped the picture and attempts to hold off a just resolution to the conflict.