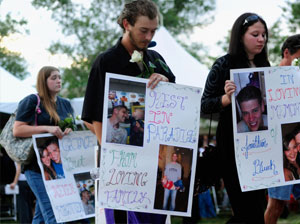 Aurora, Colorado was struck by devastating news on July 21st –a day that would mark the 36th mass-murdering spree the United States has born witness to in the past 30 years. During a midnight screening of “The Dark Knight Rises,” James E. Holmes, a masked, armor-clad, and fully-armed 24 year-old took the lives of 12 and injured 58, many of whom remain in critical condition. He was formally charged on July 30th with 24 counts of murder and 116 counts of attempted murder.

While the loss of human life is and will forever remain a national tragedy, many speculate that the intention of Holmes was exponentially more catastrophic, leaving the nation and the media with an impossible feat – correctly detailing the motivation for and chronology of the event at hand despite their being at a loss for words.

Meanwhile, however, many reporters and journalists are failing to ask the more important questions – the ones that ask who the victims are and were, and how they are coping with such a horrific event in their lives.

The typical American news cycle, in the wake of a national tragedy such as this one, seeks resolution – an end to clashes, confusion, and conflict. It usually begins with the reporting of the incident, then a description of the suspect, an analysis of the suspect’s background or motives, and ends with a resolution as the suspect is being apprehended and charged with their crime.

Without a clear resolution in sight, the news media tends to repeat unnecessary details over and over again, desensitizing viewers and readers of more relevant stories and issues concerning the event’s aftermath. This repetitiveness is at least partially driven by an industry that requires sensationalizing the news in order to reap financial benefits and compete with rival news organizations.

As such, rarely do we see the news media stop to focus on the victims of tragedies. We don’t learn about who the victims were or hear the stories of the survivors – nor do we hear what the families of the deceased have to say. What we do hear, however, is an endless probing of what motivated the suspect or criminal to do what they’ve done.

This is not to say that news media should completely ignore describing the suspect and analyzing their possible motives. Yes, this should happen, but there comes a time when they need to move past the sensationalist reporting that seems continue without any real direction. The story becomes a repetitive banal echo of rival news media  reports.

Uncomfortable and important questions are not being asked, and in general, news media has not done their part in reporting on the incident responsibly. Stories about potential societal roots for tragedies such as these, such as gun control and the prevalence of mental illness in American society, as well as stories about the victims and their families are not being told.

An emphasis on Holmes is not only unnecessary, but it is also insensitive and irresponsible as the focus is not on those most affected by the issue at hand.

Families of the victims are presently asking for less usage of the perpetrator’s name and face in coverage of the occurrence, so as to, in the words of Northeastern professor and mass murder expert James Alan Fox, “deny [mass murderers] the notoriety they often seek. While most Americans see these people as monsters, some view them as heroes to emulate.” News agencies are not showing deliberate attempts to assuage the families of the victims and as a result are being criticized for their insensitive conduct.

Not only has their response, or lack thereof, been insensitive, but it has also given way to a rise in the number of “copycat shooters”, all of whom have made reference to details of theAurora shooting before attempting to carry out their own acts of terror. Though many make the argument that it is necessary for the general public to know who exactly the perpetrator of these crimes is, a balance of news coverage is necessary and for the public good and safety of every party involved.

CNN’s Anderson Cooper is being both commended and criticized for sympathizing with requests of the victims’ families and devoting more time to commemorating the lives of those lost. He seeks to give less airtime to a criminal who many believe carried out these acts for the infamy that a profit-driven news arena would ultimately provide him.

The Society of Professional Journalists urges reporters to “show good taste” and “avoid pandering lurid curiosity.” Though it is understandable that people are waiting at the edge of their seats for answers, when the families of the victims in Aurora asks that the direction the media is heading in be changed, their requests ought to be heeded.

Cooper has made significant leeway in reversing the narrative; what has been for too long the story of one man killing many, the pasts and families of the innocent victims’ are now finally being given a voice.

Stories of victims – including the “Aurora Three”, or three young men who gave their lives in order to save their girlfriends during the shooting – are not being given nearly as much airtime as other stories, including semi-ludicrous conspiracy theories. Issues such as a lack of psychological and social services, the strength of institutions and the media’s inability to portray mass violence in a critical way only becomes part of the national discourse when the damage is already done.

Following a tragedy like this, fear and hostility are bound to be omnipresent, as was the case on the Virginia Tech campus, where students passed out fliers saying, “We need each other. The media has taken advantage of our situation and are exploiting us for their own sensationalism. We will not tolerate the abuse; we love our community far too much to stand for this anymore.”

Such understandably confusing and hostile environments prompt a much-needed discussion about journalistic responsibility and the way in which an event’s aftermath is presented to the general public. Exploitation, however, cannot be justified, especially with the number of lives that have been adversely affected by such tragedies.

In incidents past, the behavior of the media has given significant shape to the narrative’s place in American history. For example, a decade after the Columbine High School Massacre occurred and after subsequent rigorous investigating, researchers found that “many of the Columbine myths emerged before the shooting stopped, as rumors, misunderstandings and wishful thinking swirled in an echo chamber among witnesses, survivors, officials and the news media.”

To find that the sequence of events was at worst sensationalized and at best incorrect is unsettling. We must commit to finding a balance between covering news about the perpetrator, victims, and potential causes or motives that led to the act being committed in the first place.

We cannot pinpoint an answer to why such horrific events occur, but in order to prevent of the likelihood of their increasing, our media can play an extremely beneficial and crucial role by asking the right questions and telling the stories of those who deserve it most.