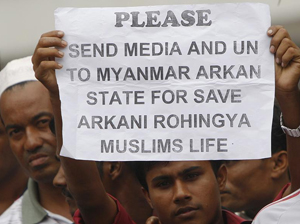 Genocide remembrance in the United States follows a dispiriting pattern. We read in horror the accounts of Armenians, Jews, Rwandan Hutus and others who were slaughtered by the millions, shudder, and promise to ourselves and the world “never again.” Yet when the time comes for each generation to stand up and to do the right thing where others once stayed silent, we shirk our duties to humanity and let history repeat itself yet again.

Today the spectacle repeats itself in Burma, where systemic ethnic cleansing of the Rohingya ethnic group is taking place to the yawns of an indifferent world. Often this site is used to either praise or call out the media for something they do. Sometimes though it is what is not done that is truly deserving of comment.

The Council on American Islamic Relations-Chicago (CAIR-Chicago) recently called a press conference in conjunction with the Burma Task Force USA, a coalition of Muslim organizations led by Abdul Malik Mujahid, assembled to help the Rohingya inform the media about the humanitarian crisis in Burma and the surrounding countries to which the Rohingya have been forced to flee. This press conference was notably deficient in a single way, however, namely in that no members of the press elected to come.

Why does this lack of media attention matter?

Quite simply, the Rohingya desperately need our help. The United Nations has declared the Rohingya one of the most persecuted groups on the planet. Doctors Without Borders has described them as in danger of extinction as a people.

The Rohingyas are literally people without a state. The Burmese government cancelled their citizenship in 1982, even though their roots in the region date back to the year 800, and now subject them to a variety of horrors, include killings, rapes, destruction of mosques, evictions, forced labor, and a variety of other forms of persecution. Hundreds of thousands fled and now live precariously as refugees in neighboring countries. After a recent spate of violence starting in June, dozens were killed and a further 80,000 were forced to leave their homes. The government stood by and largely did nothing to contain the violence, while President Thein Sein helpfully suggested that the solution lay in expelling all of the estimated 800,000 Rohingya who live in the country.

300,000 total refugees are now estimated to be in Bangladesh, where they are hardly more welcome than they are in Burma. The Bangladeshi government has declared them illegal immigrants and ordered international aid organizations to cut off aid, in the hopes of discouraging more from coming. Many of these refugees have been there for years. “Generations after generations have been thrown out,” said Abdul Malik Mujahid, president of Burma Task Force USA.

“We didn’t have any rights,” said Ayesha, a Burmese refugee brought to speak to the conference by the Burma Task Force USA, “I felt not like a human.” Her fellow refugee Mohammed Anas spoke movingly of the struggles he faced both in Burma and as a refugee, being forced to drink salt water because his boat ran out of provisions and being jailed as terrorist in Sri Lanka. They were able to make it to the United States, but they were among the very lucky few.

Although we like to inappropriately throw terms like “fascist” around quite a lot in this country, sometimes those terms really are warranted. The Burmese government is an unelected military junta guided by a warped vision of a pure Burmese nation and is willing to commit genocide to see its vision come to life.

There is no doubt that what is occurring in Burma is, by any reasonable definition of the term, genocide. The United Nations Convention on the Prevention and Punishment of the Crime of Genocide (a convention the United States is a party to, it’s worth noting) considers genocide to be, “any of the following acts committed with intent to destroy, in whole or in part, a national, ethnical, racial or religious group.” Is that happening in Burma? Let’s look at the first four examples of what constitutes genocide according to the UN:

• (a) Killing members of the group; (50,000 Rohingyas have been confirmed killed or missing)
• (b) Causing serious bodily or mental harm to members of the group; (rape is widespread and systematic against Muslim women)
• (c) Deliberately inflicting on the group conditions of life calculated to bring about its physical destruction in whole or in part; (the number of Muslims in Burma is now 3 million from its peak of 5 million)
• (d) Imposing measures intended to prevent births within the group; (Rohingyas are limited to two children and must obtain permits to marry)

There is no other way of looking at it: what is occurring in Burma amounts to genocide and the lack of attention given by members of the press shows that Americans don’t care. “Never again” rings hollow indeed.

Why this lack of attention? Perhaps because Burma presents the media with a very complicated narrative. Nobel laureate Aung San Suu Kyi, as well as other Burmese democracy advocates, are heroes worldwide for their resistance to the junta. Yet as Buddhist politicians looking towards their next elections, they have been silent on the plight of their Muslim countrymen, if not outright hostile. Many organizations of Buddhist monks who were indispensable to the struggle for democracy are actively trying to block aid from reaching the Rohingya. There are precious few unsullied heroes left in Burma.

Or perhaps it is something simpler: apathy of Americans towards world affairs. With some notable exceptions (Israel, creatively named Russian punk bands) world affairs are distinctly secondary to the citizens of this country. They’re practically a non-issue in the coming election. It is telling that, despite the supposed mania for deficit cutting sweeping the nation, the only thing Americans can agree on cutting is foreign aid.

Economic problems at home may be tempting us to shut our eyes to events happening beyond our borders, but the modern world needs American leadership far too badly to let that happen. We would be best off remembering the 1930s, when we gave in to the temptation and unspeakable horrors took place at the hands of the German, Japanese and Soviet governments.

What can be done? The Burma Task Force USA is calling upon the United States government to re-impose sanctions upon the government of Burma until they close their concentration camps, persecute those who are responsible for the rape of Muslim women, open the country up to foreign media and relief organizations, and restore the Rohingyas’ citizenship. It also calls upon the governments of Bangladesh, India, and Thailand to allow aid organizations full access to the refugees.

The government will only do that if it knows that this is an issue that the American people care about. That, in turn, will only happen if the American people are informed about what is going on. “We request some country to help us and give a future to every refugee” was the plea of Ayesha. Let us hope that next time she will find more people willing to listen.

A Step Forward: Religious Accommodation in the Military