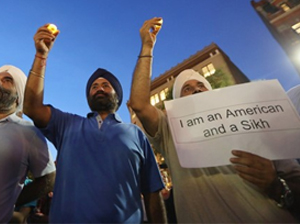 Eleven o’clock on Sunday Morning is said to be the most segregated hour in America.

Reverend Martin Luther King Jr. startled listeners with this proclamation at first, shedding light on the fact that despite being followers of the same faith, blacks still constituted the “other” and virtually worshipped solely among themselves. As a reverend and champion of civil rights, King waited and hoped for a time when Americans could live and worship together, across color lines. The usage of these words is widely viewed as cliché today.

I solemnly doubt their relic.

Weeks after the nation mourned the lives of those lost at the least unexpected of places – a local movie theater – we awoke Sunday morning to find that a Sikh Temple in Oak Creek, Wis. was similarly marred with an act of domestic terrorism. Wade Michael Page, a former member of the U.S. army with ties to neo-Nazi groups opened fire on a Sunday morning congregation. Six were killed.

Page died due to a self-inflicted gun wound and as such, we will never fully know his full-fledged motivations and the intent (though his membership in “End Apathy,” a white supremacist rock band, may point us in the right direction) he had prior to opening fire in a house of worship.

It has been noted time and time again that in the wake of 9/11, Sikhs have been mistaken for Muslims due to similar physical attributes such as turbans and beards. Understandably, news outlets (CNN, Fox News, MSNBC) and the general public have speculated whether or not he mistakenly took a congregation of Sikhs as one of Muslims. Though it is the fifth largest religion in the world and Sikh Americans constitute an extremely financially and socially mobile ethnic group in the United States, basic tenets of the Sikh faith had been given airtime only after blood had been shed.

At around 11 AM on Sunday morning. I do not think it is unreasonable to ask whether or not ethnic and religious minorities that attempt to wholeheartedly thrive in American society still make people uncomfortable. Has dialogue crossed racial and religious lines? Do people honestly believe assimilation can prevent a tragedy like this? Immediately after the shooting occurred news outlets sought to highlight the fact that Sikhs are not in fact Muslims. The way in which beliefs were detailed left us under the impression that the two are essentially diametric faiths – Sikhs practice nonaggression, are rooted in social activism, and are peaceful people.

Does this mean Muslims are naturally violent and aggressive people? Does it mean that had this been a Muslim mosque, violence against innocent, civilian, American lives would have been understood – or worse – justified? Forget Rep. Peter King’s Islamic Radicalization hearings and NYPD surveillance or explicitly Islamophobic FBI training materials. As the media has so clearly demonstrated in the wake of this tragedy, Islamophobia thrives just as much on subtlety and implicitness as it does on outright condemnations and irrational fear. What is worse, however, is the way in which these perceptions become Gospel.

Though distinctions between Sikhism and Islam are necessary to clear up confusion, the fact that one should feel safe living in America, regardless of one’s religion or ethnicity was not stressed alongside them. Vijay Prashad writes, “Racist attacks are authorized by a political culture that allows us to think in nativist terms, to bemoan the “browning” of America … with the political class unwilling to reverse the tide of jobless growth and corporate power, the politicians stigmatize the outsider as the problem of poverty and exploitation.”

The “other” that MLK was referring to still exists today. Strides are not being taken to reverse the public markers of a hostile and confused national psyche, including discrimination and prejudice towards minorities.

News sources, if not made aware of patterned media portrayals of racial, ethnic, and religious American minorities, will continue to project the existence of an alien, inferior “other”, be it intentional or not. We must continue to push for a more critical analysis for the way in which stories are told – and thus, how perceptions are framed – so that people will not live in fear when attending a movie or prayer.

Someone asked me today, “What are Sikhs? They’re like, the most peaceful people ever, right? Opposite of Muslims.”

It’s been a long hour. Ensure it comes to an end.