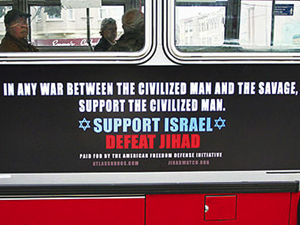 This message was displayed on buses throughout the San Francisco metropolitan area in the form of pro-Israel advertisements, which caused some disturbance among the neighborhood spreading nation wide. The infamous anti-Islam group American Freedom Defense Initiative (AFDI) and main supporter/sponsor Pam Geller, was granted the permission to exercise her first amendment right to display controversial advertisements on the side of MTA and MUNI public transportation. If the first amendment is synonymous with belittlement then Geller’s was well applied.

Initially the group was denied their request to use the bus as a means to support their Anti-Muslim agenda, but the court case American Freedom Defense Initiative vs. Metropolitan Transit Authority ruled in favor of AFDI as their attorney David Yerushalmi, known for his bigotry, argued that “MTA’s ‘demeaning speech’ policy is a viewpoint-based restriction, which is the most egregious form of content discrimination under the First Amendment.” The ad campaign caused an uproar which jolted many responses of opposition to the hateful ad clearly intended to compare Muslims to savages. Savages? This choice of terminology is just the rhetoric which explains their ignorance and confuses the minds of her followers and other truth seekers. Israel’s long standing beef with Palestinians begins the heated debate, but the fact that this ad attacks an entire culture in general is where the mistake lies.

As an outsider, reading a statement such as “Defeat Jihad” gives the impression that this is assemblage of the militant, rather than a religious statement. The word Jihad directly translates to “struggle”, representing the Muslim religious commitment and the strive to live right by God. This well-known holy war should not be mistaken as constant acts of terror or frivolous danger and harm to others. It is and always will be frowned upon to act in the sake of vain to God in the Islamic faith. In each religion there is a group of extremists that don’t always act in the best interest of their faith, which give a false impression of beliefs and motives. Falsehoods such as this explain the creation of anti-Islamic awareness sites such as Jihad Watch.

But there is hope and exists properly informed individuals that are determined to get their voices heard just as well. Although the law was not on the side of MTA, they still clearly supported the action to remove the ads, and in their own defense placed counter ads adjacent to AFDI’s ads expressing their stance to the fullest effect. And there are other supporters, following the same suit by affirming their disagreement with the content of the ad. Locals dispersed petitions for ad removal which floated throughout the San Francisco area as well as local artists who tagged graffiti on the sides of the busses deeming it a form of hate speech.

The Jewish Community Relations Council of San Francisco also had their statements to make, expressing they were in favor of the removal of any anti-Islamic advertising efforts. They are clear supporters of educating the public about Islamic radicalism, Muslim stereotypes, and anti-Israel ads, but they are just as concerned about what potential threats could surface from just as equally offensive anti-Muslim ads. How this particular message was not a direct representation of unconstitutional dialogue generating a misinformed idea to the masses will remain desolate. AFDIs campaign made court history with the granted right to advertise demeaning statements even at the expense of San Francisco’s public transportation system standpoint. Policy clarification is hazy and obviously can be overturned. Clearly politically charged, but ruled otherwise to avoid an extensive court case exposition.

The efforts however will continue. AFDI’s marketing tactics are not meant to be confined, but to spread and intrude into the populace of the “uninformed”. Since the formation of the SIOA (Stop Islamization of America) these ad campaigns have made headway and got the “conversation” going. Fear alone is the fuel, and is well supported as continuous allegations represent the Islamic community as conclusive and a collaborative group of militants. One of their main explorations of this was the campaign against the construction of a mosque near ground zero after the 9/11 attacks. They produced a movie “”The Ground Zero Mosque: Second Wave of the 911 Attacks” as well as advertisements promoting a distasteful proclamation that there was no right involved and it was a ploy to infiltrate and further continue plans of terrorist action.

These accusations are not only a clear display of individual fear, but installing fear into others without analyzing the truth and giving supporting evidence. The main argument of the protection issue cannot be so isolated to demeaning slander because that is not what keeps us safe. However, that emotion of “fear” is what causes people to act first and think later. In the middle of SIOAs ground zero mosque campaign, signs and banners with statements such as “Islam = 1400 years of Aggression, Murder! ‘Peace’ of Islam = Cutting Non-Muslims to Pieces! Never Submit to Sharia – Islam!” showed the true face behind the mask, appearing to have the intention of expected hostile action which would give them credibility that the anti-Islam agenda must continue and their positioning is accurate. A common trend is that Sharia Law equals terror, and any practicing Muslims have the goal of imposing this law on Americans. One word; extremism.

The great thing about America, however, is that our laws will give people the right to say what they feel, but there is also the right to freely practice your religion and without worry that you will end up the grunt of someone’s subjection. I always believed the goal was to represent justice and brand integrity.