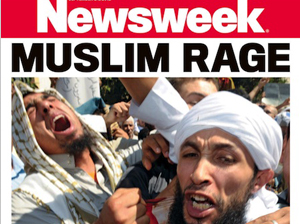 The Sep. 24 Newsweek cover image with the title “Muslim Rage” and the article associated with it by Ayaan Hirsi Ali is bigoted and stereotypical of Islam and Muslims, bringing to question Newsweek’s journalistic integrity.

Shown pulling and tearing at one other, Muslim men with beards and turbans look like they are in a fit of violent “rage.” One of the men’s anger strongly suggests that he can not only kill someone (with teeth barred and eyes unfocused), but that he is beyond reason.

Besides implying that acts of terrorism–irrational acts of violence usually associated with Muslim fundamentalists in the media–are inherently Islamic in these pictures, Islam, a major world religion and way of life for many, becomes relegated as violent and as a problem that needs to be “ended,” as the subtitle states.

“Islam’s rage reared its ugly head again last week,” says Ali in a blanket statement defaming a whole religion. She was referring to the murder of U.S. ambassador Christopher Stevens in Libya and protests in other Middle Eastern countries sparked by a movie insulting Islam’s prophet, Muhammad.

Like Ali and Newsweek, the media did a great job of sensationalizing and amplifying this violence to sound like the whole Middle East and the majority of the Muslim world was host to major uprisings.

However, according to CNN, in Indonesia, a country of over 200 million people, only several hundred people protested, and in Egypt, with over 80 million, only 2,000 people protested and not all the protests were violent. If you take Egyptian protesters, for example, you’ll find that the protests aren’t as large as some might think: hundreds of thousands rallied to oust Mubarak, while only a couple of thousand protested against the “Innocence of Muslims.”

Overall, the number of protesters in the streets were not greater than 10,000 people, and there is approximately 1.5 billion Muslims worldwide.

“In Lebanon, no protests occurred until Monday. Why? Because the pope had been visiting the country, and the leader of Hezbollah, which the U.S. has labeled as a terrorist group, didn’t want to do anything to interfere with the pope’s historic three-day visit,” stated Dean Obeidallah from CNN.

There has also been an outcry of support by a large number of Muslims for Ambassador Stevens’ family, and clear condemnation of the violence brought on by protestors.

Many Muslims have taken to sending condolence letters to the ambassador’s family through 5,000 Mercy Mailings, a website created just for this purpose.

The Council on American-Islamic Relations released a video appeal in Arabic to Middle Eastern viewers urging them not to resort to violence. The video tells viewers that the U.S. government and its citizens should not be blamed for the derogatory film.

In spite of all this, Ali advises Western nations not to “bend over backward” to condemn this film, because in doing so they would add fuel to the fire of Islam’s supposedly widespread violence.

However, there is no validity to Ali’s claim because, in fact, the majority of Muslims did not see this violence as representative of their religion or prophet or at all necessary.
“I am sincerely unable to express the senselessness of those that committed the acts that took your loved one. They do not speak for my religion,” said one Muslim in a condolence letter from 5,000 Mercy Mailings.

And, while the majority of offended Muslims did not see that the film deserved or needed a violent response, Ali seems adamantly convinced that whether Muslims “actively or passively,” condemn the movie they are generally intolerant, which she describes as a “defining characteristic of Islam.”

Well, we’ve established that the majority of Muslims don’t believe that the violence was justified, but for Ali to go a step further and say that Muslims, in general, are intolerant because they feel offended by this movie–even if “passively”–is just plain wrong.

Apparently Muslims, according to Ali, have no right to feel offended even if they are insulted, because if they do then they are automatically denying their defamers their freedom of speech and expression.

“America needs to empower those individuals and groups who are already disenchanted with political Islam by helping find and develop an alternative. At the heart of that alternative are the ideals of the rule of law and freedom of thought…,” says Ali.

Ali would have a point if Muslims were actually denying freedom of speech.

Linda Sarsour, the executive director of the Arab American Association of New York said this in response to recent anti-Muslim ads on New York subways:

“You are talking about people like me being called a ‘savage’…It is all bubbling up. I know there is freedom of speech, but with freedom of speech comes responsibility. This promotes hate.”

Ali might bravely think that she is “a combatant in the clash of civilizations,” but in reality, she sounds more like someone who is trying to sell to her readers a very personalized brand of dogma.

Regardless of Ali’s bitter diatribe, it has been told that the Prophet Muhammad did not react to personal insults thrown at him during his time.

And in explaining why he stood up at the funeral of a non-Muslim person, he once said: