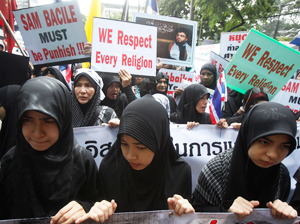 In reading Steve Huntley’s September 13th op-ed, “Must wage war on Islamic fanatics,” it presented some very troubling issues. With all of the demonstrations happening in over two dozen countries across the world over the past two-weeks, as well as a deadly attack that killed a U.S. Diplomat and three other Americans, a lot of the details are not all clear and present, but Huntley right off the bat, declares that the “war on terror is back.”

In this op-ed, Huntley muddles the facts further by not making clear distinctions between political ideology and an entire religion. Using the terms “Muslim,” “extremist ,”and“ Islamic fanatics” interchangeably, Huntley invokes the reader to infer that Muslims are these “thugs armed with rocket-propelled grenades and antiaircraft weapons killing a U.S. diplomat on the 9/11 anniversary.”

Huntley then draws comparisons with the Nazis in World War II and the Iran hostage crisis. Is Huntley misleading readers or has he himself been misled? The answer seems to be both. When the images are plastered by the mainstream media drawing attention to these attacks, provoked by an anti-Muslim amateur film, what is not being seen are the different factions of people demonstrating for various reasons.

Some of the protests are largely peaceful and diverse and have different reasons for their opposition to the anti-Muslim film that sparked the unfolding protests. The rage by some can be attributed to the oppression by their government, history, the views of the presence of the U.S, and dignity; and then there is the small group of individuals who reacted with violence for other separate distinct reasons, which again cannot be justified. The Tunisian government has condemned the violence and attacks, as well as some American Muslims, and the U.S. government condemned the film itself along with the Pakistani government, to name a few.

Huntley not making these important distinctions between the concentrated group of people we call extremists and the large group of demonstrators, takes us back to the Bush-era political rhetoric, where the line is blurred. In this case, the burden falls on Huntley, since he never makes it clear to the reader who those fanatics are. They are not the entire Muslim community, but a very small group of misguided individuals who committed unjustifiable actions, that do not represent the ideals of the rest of the demonstrators.

Huntley’s argument relies on sensationalism and misinformation, and harbors prejudice where it is not needed. It is not time for another “war on terror.” This is a bankrupt political rhetoric that has already left the American people with a bad taste in their mouths, an entire Administration tarnished, and spite spewed toward an entire faith; it can even be attributed to the tipping point of the demonstrations.

Better polices, strategies, and communication with foreign governments is a better substitute than another “war on terror” when it comes down to making distinctions and dissecting issues as complex and universal as what has unfolded on the memorial of September 11 and days after. The resulting death of a U.S. diplomat and three other Americans tells us it’s time for the United States to reexamine its foreign policy, look into the politics of these protests, and for the media, including Huntley, to become more culturally competent and make informed distinctions.