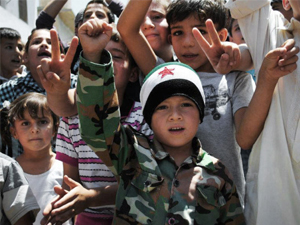 Recently, I read an article in the New York Times, titled “Syrian Children Offer Glimpse of a Future of Reprisals.” In it, David Kilpatrick wrote of the hundreds of Syrian children in Jordan’s Zataari camp who are forced to spend their days in tents, away from home, without the food, shelter, and education they desperately need. Mr. Kilpatrick’s thesis was that all of the Sunni children he met in this camp were overwhelmed by their hatred of President Bashar Al-Assad, his government, his supporters, and most importantly, the Alawites – members of a Shia sect of Islam which makes up ten per cent of its population.

In this article, Mr. Kilpatrick repeatedly expressed his shock and concern at the apparently inherent violence and intolerance abundant (manifest) in these children’s nature. He expressed fear for the Alawite population of Syria, which, according to him, “see [Al-Assad] as their best protection against sectarian annihilation.”

Mr. Kilpatrick relates the mindset of these children in a fashion that reveals them to be almost barbaric on an intrinsic level. What he fails to address in his article, however, is the mental trauma these children have experienced at the hands of the Syrian government and its supporters, the result of which is a desire to perpetuate this violence in the form of revenge.

While the Syrian Civil War has caused extensive damage to the country’s infrastructure, economy, society, and global image, it has also irrevocably damaged the collective psyche of Syrian children. Armed militias, such as the government-backed Shabiha, have perpetrated unspeakable physical violence and ethnic cleansing against defenseless women and children. Eyewitnesses have reported that such groups have adopted the “scorched earth” policy; after the Syrian military shells a protesting village or town, the Shabiha further terrorize the residing population by burning homes, firing at families, and destroying everything in their path – whether combatant or civilian, whether man or child, it makes no difference. Air raids and shelling of civilian populations continue despite the United Nations forbidding the Syrian government the use of heavy weapons against civilians.

According to reports, Syrian children as young as eight have been beaten, arrested, detained, used as human shields, tortured and raped in prisons, and killed in an effort to crush and immobilize protesting neighborhoods. Perhaps the single worst incidence of violence committed against children was at the Houla massacre, on May 25th, 2012. The United Nations reported that at least 49 children, younger than ten, had been systematically and deliberately executed in this shameful event carried out by the Syrian military and the Shabiha. Those children that survived the massacre endured armed militia men breaking into their homes and watched their entire families shot point blank, knifed, or butchered by machine guns. Even though the Syrian government denied its involvement in this incident, the UN reported clear evidence that the Assad regime was directly responsible for the attacks. A video posted online of some of the murdered children showed their wrists bound with blue ties, which means that they were tied up before being shot. Modest estimates report that of about 30,000 civilians who have died during the 15-month uprising against President Bashar al-Assad, about 1,200 are children. Syrian security forces have killed, arrested and tortured children in their homes, their schools or on the streets. In many cases, security forces have targeted children and treated them with the same cruelty as adults.

Jarred and disoriented by the never-ending violence, about 1.5 million Syrians, including women and children, have been displaced within the country and tens of thousands have fled Syria for neighboring countries such as Jordan, Turkey, and Lebanon. Some of these are the same children which Mr. Kilpatrick encountered in the Zataari camp of Jordan.
Syrian children display signs of deep emotional scarring, thoughts of revenge and murder, and getting “even with the enemy.” Reactions which should not be difficult to fathom considering the history of violence against them. The purpose of this article is not to justify or promote these children’s views. It is to state that violence and hatred are not inherent; they are learned through negative experiences and societal influences.

Expecting Syrian children to have an untarnished view of their world is not logical as they were not brought to refugee camps in Jordan from a utopia. They were brought to Jordan’s refugee camps from a country divided against itself, with the all too vivid images of violence and hatred still in their minds. They were taught by their authority figures that violence and hate prevail over peaceful protests and tolerance. Until and unless this young generation is given positive role models and reinforcement, empowerment through a proper education, and most importantly, security for their future, their worldview will be just as skewed and distorted as it is now and they will remain prone to regurgitating what they have been fed up till now; hatred and violence.