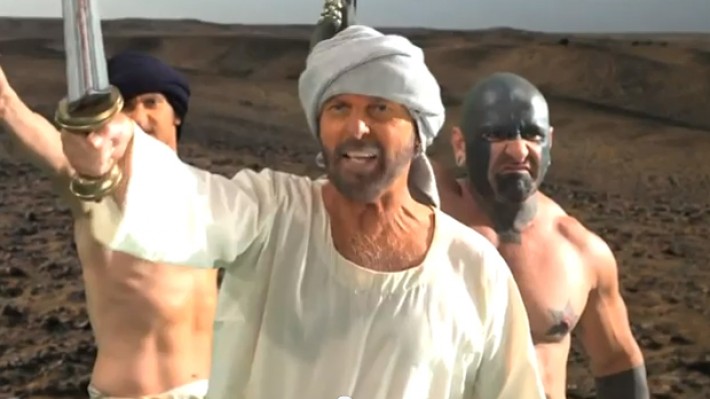 There is no doubt that the short film entitled “The Innocence of Muslims” left a bitter taste in the mouths of Muslims, American Muslims, and every other reasonable person worldwide. There are still many debates as to who was behind it and what its direct purpose was, but the gauche representation and false depictions succeeded to outrage, confuse, and humiliate across the board.

One of the primary concerns about this film is that it contributes to an already-abundant number of anti-Muslim media portrayals. With that said, continuous production of mass media such as this targeted video promotes the furthering of intolerance and hate against Muslims. Videos like the “Innocence of Muslims” are meant to exploit and defy an entire religion, leaving the majority of Muslims bearing the burden of the negative effects, while a handful of Muslim aggressors get the spotlight.

The short film was released as a trailer to YouTube in July 2012 under a different title, but then re-released in September 2012 dubbed in Arabic. The 14-minute YouTube video showed The Prophet Muhammad under false pretenses, visually depicting him as ruthless and undomesticated as he paraded around and barked out ferocious and violent orders to his subsequent followers. The video was clearly meant to question Islam’s credibility as a legitimate faith, and attempts to explain how the last prophet was a senseless killer, womanizer, and child molester.

It was reported that those involved had no idea about the anti-Islamic notions to the film, and that they were actually participating in a movie entitled Desert Warrior, a story that expressed the “tribal battles prompted by the arrival of a comet on Earth.” This was indeed reflected in the poor quality of the film, while voice-over’s shouted statements such as “Muhammad is our messenger and the Quran is our constitution” right before the actors committed violent and futile acts.

Islam, the second largest religion in the world, still exists as the most intolerable to many. It may be tough to debate that the intolerance began after 9/11, but the problem seems to come from a much deeper root. “The War on Terror” was designed to prevent extreme actions against innocent bystanders, but in recent years we have seen a much different war.

The war has now shifted to become the war on Islam and media has become the main facilitator of anti-Muslim sentiment. In the age of the Internet, misinformation flows rapidly through the world of instant communication with TV, movies, cell phones and social media outlets. What we also see, as in the case of “The Innocence of Muslims”, is a platform for media that intend to disrupt peace and encourage conflict.
It seems as though the creators of the “Innocence of Muslims” exploited the public’s lack of knowledge on Islam, Muslims, and the Prophet Muhammad. For those that are shaken by violent acts against Americans in Libya allude to assumptions and become the teachers of a topic they are not fully knowledgeable about.

So are acts of terror by extremists’ in Libya grounds for the generalization of over 1.5 billion people? It is not proper to take a small sample, such as extremists groups, observe where they come from and then infer that everyone who is of that same racial, ethnic, or religious group will exhibit the same actions as those extremists.

What is currently happening is that people are using deductive reasoning and basing their education from the recycled stereotypes of Muslims they’ve seen in the media. But what is being missed is that the sample is so microscopic, the actions of some terrorist do not represent the Muslim community as a whole.

Regarding the preposterous video, many feel the terrorist attacks that are associated with it are a direct result of the antagonizing rhetoric against the Prophet Muhammad, but there were deeper rooted issues before the release of the video, and because the two are so heavily linked, the impression exists that any time a Muslim feels their religious leader is put down, there will be a violent attack following. The producers of this type of media are trying to impose a certain type of behavior, conspiring antics to either get attention from media viewers or prove an otherwise null point.

Immediately following the attacks on U.S. Embassy, a French magazine added fuel to a worldwide fire and produced defamatory cartoons about the Prophet Muhammad, stating it was their free will to respond to the protests that were happening across the globe and it was for no other reason whatsoever. After it was released, there were great precautionary measures taken as sort of an insurance that no protests or violent activities would occur. France closed embassies and schools in over 20 countries on that following Friday because it was the Muslim day of prayer. This is just another example; generalization at its epitome.

So as the discussion continues, and the protests unravel, the media will continue to troll anti-Muslim correspondence, stories, satirical representations, and tasteless ideology. “The Innocence of Muslims” was not just some projection about what will happen anytime people mock the Islamic religion, it is a statement that there is much more intolerance present and on the rise. Criticize the violence; not the innocence, spread knowledge; not fanaticism.

Steve Huntley fumbles and loses with the issues