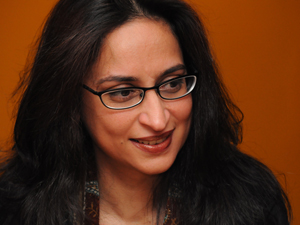 In her recent article, Cutting through the anti-Muslim propaganda, Deepa Kumar highlights the information that failed to be mentioned in mainstream media, while providing relevant points of clarity.

Kumar makes it clear that there are other reasons for the small protests that took place across the “Muslim world” in response to the anti-Muslim video “The Innocence of Muslims.” She notes that the U.S. is not just an innocent bystander in all of this and that the mainstream media is softening the reality of events by stating that the protests were just a “clash of civilizations” type response. These are among the strongest points in her address.

The problem with the mainstream media’s narrative excludes the fact that Americans (like the “Innocence of Muslims” creator) tend to take freedom of speech much further than simply expressing their views. The responsibility that goes along with freedom of speech seems to fall by the wayside when people are given the opportunity to incite tension and violence, and the perpetrators of such incitement defend their actions by claiming they have the right to express themselves however they wish.

Part of the problem also goes back to how the mainstream media develop narratives that promote particular ways of thinking, understanding, and perceiving mistruths.

It’s great that there is finally a perspective that presents the other factors that have incited the protests and reactions that led to the death of four Americans in Benghazi, Libya last month. The mainstream media continually states how it is the disparaging films and cartoons about Muslims that produce “Muslim rage”, however, this is too simplistic of a notion. Could there be other reasons why Muslims might be angry? Surely – but questions like these are not being asked and the narrative of the ticking time-bomb Muslim continues to play out.

This is where Kumar picks up the mainstream media’s slack. She asks these tough questions and encourages a deeper analysis of the causes of the “Muslim rage” the media has been so hyped about. Hopefully more articles such as Kumar’s will get the media coverage that they deserve because they shed light on these issues and bring clarity and help dissolve misguided stereotypical presentations of Muslims.

What is great about Kumar’s piece is that it gives a historical context to the animosity that some Muslims are feeling. With the U.S. being involved in influencing the political process in Muslim majority countries, to counter-revolutionary efforts, invasions and occupations, and attacks on civilians – these are all reasons why Muslims might harbor resentment to foreign intruders (more specifically, the U.S.).

Kumar also asks the question as to what happens when Islamophobes use anti-Muslim propaganda as a basis for education. The Islamophobes push their own political agendas by spreading hateful messages and the public (who might genuinely be seeking information about Muslims) are confronted with false and deceptive information.

Jihadwatch.org, published by Robert Spencer, is among one of the most popular anti-Muslim sites in circulation, but there are many others that strive to follow in his footsteps. And what about the high volumes of criticism the film “The Third Jihad”, used by the New York City Police department got for counter-terrorism training? This type of fascist media is considered extreme and holds no merit, and is simply miseducation posed as legitimate information.

Misinformation is not just offending Muslims in other countries, but are also putting American-Muslims in a difficult predicament. Muslims seem to be clearly under attack as hate crimes continue to pop up across the U.S., before and after the attacks in Libya; but there hasn’t been much media coverage about that, has there? Mosques have been targeted before, but the trend is continuing to fester, with the most recent attacks on the Islamic Center of Toledo in Ohio, the third largest in the U.S.

The most important point to be taken from Kumar’s article, however, is the fact that the protests are more so representations of embedded resentment coming from the Muslim-majority countries, rather than rash behavior due to some tasteless film or insulting caricatures.

Western imperialism and the forcible intent to construct the Muslim-majority countries into a more “liberal” and “modernized” Western culture has created extremism (as in the case of the militia who murdered four Americans in Libya). So it isn’t that Muslims are irrational “savages” that fly off the handle whenever someone mentions their religion in vain; it’s that there are a small percentage of radicals that take their patriotism or religiosity one step over the edge. It’s important to make that distinction – because the mainstream media isn’t.

The peaceful protests the mainstream media failed to acknowledge

The blurry line between freedom of speech and hate speech