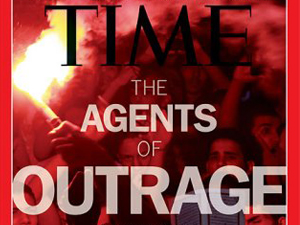 It’s hard to imagine that a crudely made, short, propaganda anti-Muslim video, made by a literally unknown filmmaker, would not only spark one of the worst social upheavals in years, but to also have the Western media exploit the facts involved with the protests.

In the September 24th issue of Time magazine, the editors and writers went the way of their magazine industry cohort, Newsweek (who boldly titled their contentious cover “Muslim Rage”), and presented a provocative cover depicting the protesters involved in the small uprising over anti-Muslim video the “Innocence of Muslims” as “The Agents of Outrage,” and as Time magazine does best, with a stark, eye-catching imagery, they captured a pictorial moment of the outrage to accentuate the story of the attacks on the consulate.

Bobby Ghosh then insinuates further, in his title piece “The Agents of Outrage,” that the protests were not spontaneous. He argues that this was a result of the aftermath the Arab Spring that removed civility from the lives of Muslims, in which Ghosh poses the question, “Did the Arab Spring make the Middle East more dangerous?”

It’s a legitimate question, but it cannot be substantiated by facts—because the article presents none.

When the Arab Spring erupted, the mass protests were seen as a sort of primal scream for democracy. It was unprecedented with hundreds of thousands flocking to the streets in one country after the next across the Middle East demanding new order, new representation, for civility in their respective country. It was a new-age social revolution for justice.

The world was witnessing this sensation and, in a way, rooting for the protesters. It even mirrored, and gave wave to, the budding Occupy movements at the time in the U.S. which came several months after the start of the Arab Spring. The Arab Spring was transcending a new role for what democracy is: no corruption, efficiency and accountability in government, justice, disbanding militias and overall participation from the citizenry for their basic freedoms that democracy entails, including representative elections.

Time magazine themselves even named “The Protester” the person of the year in 2011; again, with a stark, eye-catching imagery to accentuate the story; it was an artwork of a Muslim woman in hijab, a traditional headscarf worn by women in the Muslim faith. This was a way for the world to know that the protester was trying to usher in this new role of the citizenry in a truly representative democracy, and the Arab Spring was the leader of all the movements at that time.

However, now with the “Agents of Outrage” issue, they seem to be contradictory and hypocritical. Time and Ghosh seem to forget about the praise of the protesters by now turning them into what the article argues as mindless pawns, aggravated by the “shadowy filmmaker,” and committing unjustifiable violence.

Ghosh agrees that the film is crude, and is only somewhat offensive by depicting Muhammad, but does too much unpacking of the film to take away its power as ammunition to the extremists that do exist:

“The film … makes no such concessions to Muslim sensibilities. Indeed, showing Muhammad is the film’s only innovation. The accusations it makes about him are rehashed from old Islamophobic tropes; the script is clunky and the acting high-school-ish. The movie was apparently made last year, and although the filmmaker claimed to have spent $5 million on it…,” Ghosh affirmed.

Then Ghosh notes that the countries where the demonstrations occurred are “neophyte democracies,” which arguably means they are susceptible opposition, uprisings, and conflict, before democracy truly sets in with decent policies and foreign relations.

But that should be the point where Ghosh makes the distinctions of the factions of the protests. Larger amounts were peaceful and the others small, but inciting the violence and riots. But he does not.

This deadly mixture of characters that seize and defile the faith of over one-and-a-half people only instigates the protest. So when you add that with a long history of the people of these countries being oppressed by their government, presence of the U.S. and other militias, and the indignity suffered in the post-Arab spring—some resort to expressing the grievances they have.

As NPR notes in their recent On the Media segment, with Middle East scholar Marc Lynch, that the media got the story all wrong. Lynch argues the fact that the media took the small, yet significant, images of individuals storming the consulate and burning it down and labeling it as “Muslim Rage” and a “clash of civilizations” was too much of shock tactics from the media.

Lynch emphasized the fact that these types of demonstrations were “small, petered out quickly, and followed a radically different pattern from past anti-US agitation.” Clearly, this was not a large anti-American movement caused from the diminished civility left from the Arab Spring. Lynch also stressed the fact that the media did not seem to cover the more significant story of the peace demonstrations that called for peace and the disbandment of the militias.

And this happens because the narrative “didn’t fit the story, didn’t fit the script,” because “they’ll report the bearded men with torches at the embassy, and then completely ignore the civil society activists [in the same place] who are demanding the ending of corruption,” as Lynch concluded his reasoning.

Ghosh’s reasoning, however, ends much like that of a Law and Order episode, leaving the audience to decide the facts and with no way of knowing what really happened. It leaves me wondering if Time magazine likes to capitalize on sensationalism or follow a logical flow of in-depth reporting. It may be easy to do the former, but more beneficial to do the latter.