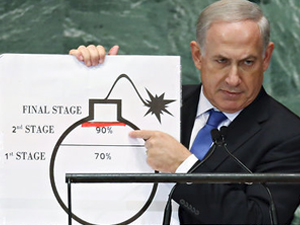 As the United Nations General Assembly (UNGA) heard the concerns of Israeli Prime Minister Benjamin Netanyahu over Iran’s nuclear programme, the not-too-unfamiliar sound of war drums began to beat again, softly. It has been nearly a decade since the start of the war in Iraq, which – coupled with the war in Afghanistan and a burst of the housing bubble – left our economy in shambles and our global hegemony permanently scarred. Oh, and it has left the Iraqis in an unpleasant predicament in which they continue to attempt to survive.

The issues with Netanyahu’s speech are threefold: (1) his rhetoric is all too similar to the rhetoric used in the months leading up to the 2003 invasion of Iraq; (2) his assertions are supported by promulgated falsities; and (3) despite his accusations, he hypocritically ignores similar Israeli shortcomings.

The claims of Iran’s direct threat to America, of the need for removal of a crazed ruler (or crazed rulers), and of the threat of nuclear weapons are all too familiar. The Bush Administration claimed that Iraq was an “imminent threat” and that Iraq was seeking to “strike the US with weapons of mass destruction.” James Clapper, the national director of intelligence in the US, believes that Iran is now “more willing conduct an attack in the United States”. Saddam Hussein – who, interestingly, was supplied with weaponry and backed by the US in an attack on neighboring Iran – was considered (at the time) the most dangerous man in the world. Similarly, Iranian President Mahmoud Ahmadinejad has been labeled a lunatic who, according to Netanyahu, is calling “for Israel’s destruction almost on a daily basis.” Most importantly, the threat of Iraq’s supposed weapons of mass destruction (WMD) – which, former British Prime Minister Tony Blair recently admitted, were not the initial reason for initiating the Iraq war – was the most important bits of propaganda used in convincing Americans to support militarized entrance into the region. Similarly, loosely supported claims that Iran is developing nuclear weapons are used as factual arguments to support potential pre-emptive military action against the Islamic Republic.

More interestingly, it is once again a leader of Likud advocating for an American action. Yet Israeli citizens were not exactly supportive of involvement in the Iraq war as many Israeli newspapers accused “[Prime Minister] Ariel Sharon’s government of exaggerating the threat of war with Iraq.” Meir Dagan, the former head of the Mossad (Israeli intelligence), argued that a conflict with Iran would be devastating for Israeli citizens.

The idea that this rhetoric is presenting itself once again is scary; though some of the rhetoric is not entirely inaccurate, the framing of the rhetoric has created an atmosphere in which a militarized action is the correct – and perhaps only – possible resolution. The dangerous framing is made possible by the promotion of misinformation. In short, Iran has not been formerly accused of violating the Non-Proliferation Treaty (NPT), Iran is not a direct threat to America (but, instead, only to Israel), and never did Ahmadinejad (or any other Iranian leader) threaten to “wipe Israel of the map.” These fabrications have formed the basis for the Prime Minister’s plea to “draw a red line on Iran” and to support a pre-emptive strike.

While Netanyahu continues to accuse the Iranian government of violating their NPT obligations, it ignores two very interesting – and very relevant – facts: the United States (Israel’s primary sponsor) has actually violated its own NPT obligations and Israel is not even a participant in the agreement. So while Netanyahu condemns the potential for Iranian warheads that could prevent peace in the region, he hides the Israeli arsenal of 100+ nuclear weapons (supplied, of course, by the United States). What’s more, he accuses the Iranians of promoting “their brand of radical Islam” and claims Israel “cherishes life.”

He is hypocritical, and misses the mark on both his accusation and assertion. There is no doubt that the Israeli people cherish life; however, the consistent repressive activity of the Israeli government has done anything but cherish the life of the sorrow-ridden Palestinians who are choked of movement, discriminated against, and lacking in water and healthcare (despite his claims). By framing the actions of Iran as dangerous and labeling these actions as brands of “radical Islam”, Netanyahu sheds an undue religious light on a political conflict. By dragging religious factors into the conflict, he gives false legitimacy to this idea of “us vs. them” (Samuel Huntington’s “The West vs. the Rest”).

Netanyahu’s speech should serve as a wake-up call to all who were displeased with the outcome of the American invasion of Iraq in 2003. The beats of the war drums beat ever louder, as the US presidential candidates will surely fight to show who is more loyal to Israel and who is more willing to support military action against Iran. Netanyahu is asking the UN to consider when war with Iran would be justifiable. Before the United States enters into ANOTHER war in the region, it is imperative to consider whether we are fighting to protect our citizens and our nation, or whether we will – once again – fall into the trappings of war, fall into another recession, and fall into a state where we are more susceptible to attacks on US global superiority. That history will repeat itself in under a decade is dangerous but – more importantly – avoidable.