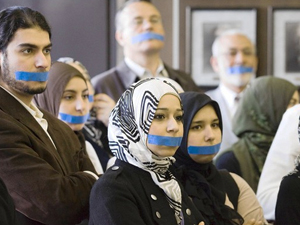 In August of 2012, the Assembly of the State of California passed Resolution 35. In the resolution, the Assembly “unequivocally condemns all forms of intolerance, including Antisemitism, on public post-secondary educational institution campuses in California.”

With close examination of this resolution and the events leading up to its legislation, it is clear to see how Resolution 35 poses a problem. Resolution 35 is a rejection to California students’ first amendment to freedom of speech, it induces ignorance and prohibits movements for social change. Such a problematic and unconstitutional resolution was possibly passed due to strong Palestinian activism in California, the events surrounding “Irvine 11”, and the proposed divestment bill at UC Berkeley.

First things first. Just what is Antisemitism? According to resolution 35, The U.S. Department of State has adopted “ the European Union Agency for Fundamental Rights’ working definition of Antisemitism, which notes that in context certain language or behavior demonizes and delegitimizes Israel or attacks Israel with classic anti-Semitic stereotypes, such as denying the Jewish people their right to self-determination, applying double standards by requiring of Israel a behavior not expected or demanded of any other democratic nation, drawing comparisons of contemporary Israeli police to that of the Nazis, and accusing the Jewish people, or Israel, of inventing or exaggerating the Holocaust.”

This resolution is very problematic because it takes away the right of freedom of speech, our first amendment. The first amendment gives Americans the right to express their ideas and opinions. What the resolution is saying is that California college students do not have this right anymore. California students cannot voice their opinion about matters surrounding Israel or express any ideas that criticize Israel. This essentially creates a blur between anti-Israeli policy and Antisemitism. Certainly hate speech toward any person or religion is wrong but stating facts about a countries government is not; neither is expressing the disapproval of the actions of a government. The resolution saying that it is. Resolution 35 labels anti-Israel policy or criticism of Israeli policy as anti-Semitic and should not be allowed on campus.

In order to understand why anyone would have ill feelings about Israel’s government, I shall briefly summarize the Palestinian-Israeli conflict. In a nut shell, after WWI Britain granted Jewish people a home in Israel, a land already home to Palestinians. Britain gave the Jewish people a large percent of the land and took a large chunk of land away from the Palestinians. Over time, Israel grew as a nation/military power and today inhumanely asserts their dominance over Palestinians through violations of human rights and international law. Israeli government policies allow for the displacement of Palestinians from their homes, give way to the theft of Palestinian land, restrict Palestinian movement with a separation wall, “Jewish-only” roads, and hundreds of checkpoints, limit Palestinian from resources like water and health services, and indefinitely detain and torture Palestinians for their political views.

Dialogue is vital in gaining understanding and awareness about another person’s views or beliefs. It is a platform that allows people to learn from one another and talk about controversial topics or issues. Dialogue can also lead to movements for social change such as protests that further spread knowledge and awareness to push for a conflict to be resolved. The resolution prohibits such progressive actions by labeling anything that criticizes Israel as anti-Semitic and unaccepted. So a peaceful protest or discussion about how it is wrong what Israel is doing to Palestinians can lead to being labeled as anti-Semitic and being condemned.

Resolution 35 is also unnecessary because federal law already forbids hate speech against person or a group on the basis of color, disability, ethnicity, gender, nationality, race, religion, sexual orientation, or any other characteristic. This resolution also implies that no other race, religion, or ethnicity is spoken of in a negative light, which is simply not true.

In the documentary The Israel Lobby, U.S. elected officials discuss how they remain neutral on the Palestinian-Israeli conflict in politics because if they speak out against Israel, they would lose all support from their constituents. To put it in layman’s terms, criticizing Israel’s actions is a big no-no in the U.S. political system because the U.S. has political and economic interest in Israel and criticizing a friend of the U.S., especially when the criticisms point out such heinous actions, would compromise that relationship.

There are many factors that led to the drafting of this resolution, but an important one was the student-led Divestment Bill (http://www.berkeleydailyplanet.com/issue/2010-04-15/article/35024?headline=No-Final-Decision-on-UC-Berkeley-Israel-Divestment-Bill-after-Marathon-Meeting–By-Riya-Bhattacharjee-) at UC Berkeley. The bill, which is part of a broader boycott, divestment, and sanctions (BDS) campaign against Israel urged “UC Berkeley to divest from two American companies—General Electric and United Technologies—which produce aircraft for the Israeli Army designed to bomb and kill civilians”. The bill lost by one vote but had overwhelming support from Jewish, Muslim and other non-Muslim students and faculty. This bill was deemed a threat by the Israeli lobby, and faculty and students were pressured to sway the vote in favor of not divesting from Israel.

And let us not forget what happed to the students at UC Irvine who were expelled and arrested for nonviolently confronting Michael Oren, Israeli Ambassador to the United States, with prepared statements of protest. Their disapproval was not of a race or a religion but the policies of a corrupt government. Their act of protest criticized Israel’s massacre of over 1,400 Palestinians in Gaza in the winter of 2008-2009 as well as the state’s ongoing human rights and international law violations. It is clear to see that the Israeli lobby intends to silence any criticism of Israel on college campuses– essentially dissolving freedom of speech rights that are intended for all Americans.

Currently feds are probing students at UC Berkeley for allegations of Antisemitism (http://abcnews.go.com/US/wireStory/feds-probe-uc-berkeley-anti-semitism-allegations-17397168#.UG7qbaB2MrU ) because they protested Israel’s treatment of Palestinians. This matter is very real, very digressive, and very unconstitutional. It is not only unconstitutional in that it limits free speech, it is also counter to what academia is meant to encourage: critique, analysis, dialogue, and debate. The resolution must be repealed or freedom of speech, as well as the democratic values that underlie the very fabric of the U.S., will be compromised.