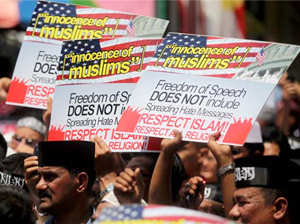 While many events over the past few weeks have spurred protests, there have also been ongoing negative depictions of Muslims in the form of the distasteful “Innocence of Muslims” video and a French magazine’s demeaning cartoons of the Prophet Muhammad.

If there was a question before about if Islamophobia was real or not, recent explosions of anti-Islamic distortions give a push of assurance. More like a final confirmation.

But freedom of speech is the founding creed to what makes a society totally diplomatic, although on the edge of freedom resides a much darker observation.

What if we looked at freedom of speech as a privilege rather than a right and that it could be taken away from us if used tastelessly? It should be used responsibly and not taken for granted, while never forgetting our liberty to freely express ourselves.

Immediately following the attacks on the U.S. embassy in Libya, a French magazine distributed images of the Prophet Muhammad in an offensive manner, similar to what was seen in the short video “The Innocence of Muslims.”

There is clearly a great line that free speech has crossed. It is no longer simply reverberates the idea of individualism, it also demonstrates that free speech can have disastrous effects. The “Innocence of Muslims” video and the French cartoons have clearly hit a nerve with the Muslim community, as they defile the Prophet Muhammad and Islamic faith.

And one of the grave, inadmissible effects came in the form of a handful of violent aggressors taking the lives of four American citizens in Libya.

The French magazine Charlie Hebdo is well known for humorous expression that tends to push the limits, taking their first amendment rights to an extraordinary level. The magazine depicted the Prophet Muhammad in naked caricatures, mocking recent events, and possibly intending to spark another intense reaction.

This was not the first time the magazine was accused of making derisive material aimed at the Prophet, they also produced a cover that implicated Islamic Law by displaying a daunting cartoon with a title stating “100 lashes if you’re not dying of laughter.”

The recent images that were presented on the cover of the magazine forced the French government to close down diplomatic missions in Muslim countries out of fear they would be attacked. Although they can defend their right to publish, the amendments aim was not to live in fear after exercising the right.

The intention behind the heinous video and cartoons may remain publicly unknown; however there is a weighty observation that can be made.

We can fight for free speech, but it is also our responsibility to re-examine what we distribute, keeping in mind that almost anything can be shared via the Internet. Our society is globally connected and to live in a more peaceful world, we should consider sensibility and have restraint on sharing offensive material.

It currently seems to be the trend to denote Islam in a negative way and ridicule the Prophet Muhammad, another instance including the Spanish magazine El Jueves also indulging in the mockery. They take the same stance on possessing the right to freely discuss current topics in whichever way they choose. But the question remains, should we stand idly by on the continued abuse of this right?

Although Charlie Hebdo stated that the real intent behind the magazine cover was to get a rise out of people and make fun of only the extremists that are involved in violent acts, it gives a different notion. It equates Islam with extremism and the followers of the Islamic faith with violence.

With the targeting of the Muslim community comes another consequence that leads to false impressions of what Islam is all about. Islam is a religion that does not condone violence, even if others are trying to defame its name, credibility, and sincerity. And now, due to the attacks in Libya, people are expecting noxious behavior from Muslims because they are unaware of the true beliefs and values of the overwhelming majority of those who follow the Islamic faith.

Freedom of speech has some limitations, including that no one person can defame another and there cannot be a clear incitement to commit a crime. By definition, the unfavorable representations of Islam that have been in the media are legal, but after recent events should there be a push to reconsider some of the guidelines associated with free speech limitations?

Although the “Innocence of Muslims” and the French cartoons are clearly meant to portray Muslims in a negative light, these offenses are accepted as a civil right because they are taken as merely implied statements, with neither true or false implications.

As long as you’re a U.S. citizen, there is no one particular group of people that are immune to freedom of speech, no matter your religion, race, sex, or national origin. Because we are granted this right, the fact remains that we must endure any reaction that may result as hateful speech.

As a society, many would argue they would not give up this freedom because of someone they might offend or provoke; but this does not mean we should ignore the responsibility that comes with our right.