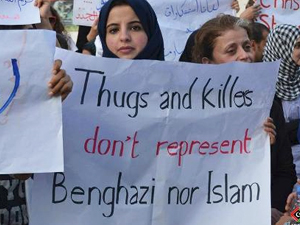 On the 11th anniversary of the September 11th, 2001 attacks, expectations of just a remembrance and memorial were thought to ensue. Instead, what happened was more tragic news–the death  of a U.S. Diplomat, Chris Stevens, and three other Americans, including a Foreign Service officer, and two Navy Seals.

Details were murky, media went into frenzy, and people were looking for the answers to who, what, when, where and more importantly, why? The mainstream media, however, ran fast and loose with the details—getting it right in some instances and becoming erroneous in others.

And when it comes to the protests taking place across Muslim-majority countries, there is a huge chunk of important information that the mainstream, and even local, media is missing.

On Sunday, September 23rd, Chicagoans protested the “Innocence of Muslims” video but  WBEZ, has shed light on this lack of coverage that would add more information to the lack of information, stating “…protests surrounding the controversial video the ‘Innocence of Muslims’ reached Chicago. Rather than the violent outbursts we’ve seen overseas, this protest was a relatively small, peaceful demonstration. But don’t look for any mention of it in the local media.”

The mainstream media seems to have been focused on either detailing “Muslim Rage” by showing raw protest footage of violence without any context while also burying it with humdrum news. In two-dozen Muslim-majority countries there have been unprecedented demonstrations. Are they all violent and enraged “Islamists” and “anti-American”?

No. But the mainstream media failed to acknowledge that.

The mainstream media would rather fluff their agenda with mundane topics. Commentary should not have been just about protesters inciting violence, but also the large number of demonstrations for peace. Muslims in Bangkok, Serbia, Greece, Turkey , Libya , Afghanistan, and Pakistan held peaceful demonstrations against the “Innocence of Muslims.”

In Benghazi last Friday, there were demonstrations for peace and non-violence in response to the violence resulting from the anti-Muslim film. Pakistan’s government even elected last Friday to be a national holiday and “a day of love for the Prophet Muhammad.” Peace protests in cities like Chicago condemning the violence and anti-American rhetoric have all been documented. A Chicago-based Muslim education group has even launched an ad to counter the film that sparked it all.

Why aren’t we hearing about these stories?

What the mainstream have also failed to ask is how the tragedy in Libya might affect international relations, American-Muslims, and whether it will create another rise in Islamophobia.

With so many demonstrations being peaceful, WBEZ poignantly pointed out, “the poor reporting… is a huge missed opportunity.”

The media should use their time digging deep (sometimes you don’t have to dig very deep) to bring holistic coverage and context to the protests. Without the context, we’re stuck with raw footage – and even now we see the media drawing back from more reporting after almost three weeks, but it is without doubt that it needs to be reported on further.

The media should also need to ask questions about U.S. foreign policy with the countries; more specifically, how a history of oppression and distrust with U.S. and respective government bodies might represent the animosity seen in some of these protests. These are all questions that should be, and seem to be, taken into account regarding the uprisings in over two-dozen countries across the globe. This will help make clear distinctions and create better efforts for internationals relations and to strategically dispel the extremist groups.

With this clear representation of peace from a great number of Muslims and non-Muslims alike, why does it seem like the mainstream media failed to report these stories when they should be top news? The burden now is falling on the media to issue all of the facts and context, stop lazy journalism, and recognize top news and report on it as such.