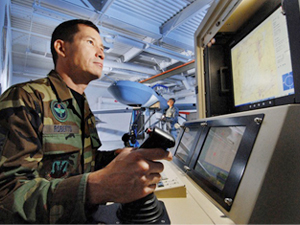 We are now in an age where technology is growing at a substantial rate and we are incorporating it more into our daily activities. Technology also has had an immense impact on the way we wage war, allowing soldiers to become even craftier fighters. Some researchers and political leaders say that drone planes are the face of new war fighting technology, but the way soldiers execute war tactics leave us wondering what impression it will have on our soldiers.

We also wonder if it will negatively shape the way they view war and innocent victims involved. Is it fair to use attacks as political means, such as sending a message of authority, with no regard for moral responsibility?

As technology continues to reshape the landscape of war, the human effects are much deeper, leaving us to question how controlling a combat plane from the safety of a switchboard room is much different from playing video games for fun and leisure.

Drone planes, are unmanned aircraft vehicles (UAVs)controlled using satellite and video cameras from remote field locations. Their history dates back to the World War I era, where the military saw a great potential for their use in combat, but became highly utilized after the 9/11 attacks and subsequent occupations and wars in the Middle East and South Asia (Iraq, Afghanistan, and Pakistan, in particular).

These planes have made a great impact on how U.S. wars are fought. Now, the solider is taken out of harms way and face to face conflict, and no longer has to worry about being killed or captured.

So what are the implications behind a faceless war?

The increased production of UAVs is a trend that will influence how future wars will continue to become more and more tech savvy.

Since 2001, the increase of military arsenal went from 60 to 6,000 and has been a leading way of defeating dangerous terrorist organizations. Developed for a number of reasons, drones are used to promote accuracy, solider safety, and to target more areas that may have been virtually inaccessible without the drones.

We see an increase in development, hoping to create ultimate precision, but there is a certain level of human control that goes unnoticed.

We have definitely evolved since World War II, where we can hit a target using a Hellfire missile with a single laser, rather than dropping a thousand pound bomb to aim at one area.

But what about hitting the wrong target? What about innocent civilians being in the line of fire?

For example, in the Amiriyah shelter attacks that took place on February 13, 1991, two fighter planes hit the shelter at the same time. This misuse of UAVs lead to a hundreds of Iraqi civilian casualties, where U.S. officials scrambled to explain. The statement suggested that the shelter was thought to be a command center, when in fact it was a refugee center for civilian women and children.

This is how a faceless war in which soldiers operate drones from a control booth can raise some serious issues. As much as we state how we are saving soliders’ lives, there is still human control of these deadly machines, which can create human error or apathy.

Lets take a look back in history at the Vietnam war, where men were on the front lines and could see just how real war was; standing nose to nose with the opposition and seeing the humility of innocent bystanders. Due to the war’s nature, many suffered post war illness and fought against the war itself in an effort to prevent others from experiencing the same thing.

The use of UAVs in present day war may make it difficult for some soldiers to distinguish a real difference between the army based video games that are played at home on their game consoles and realizing the actual “point and shoot” technique used in combat is not a game.

How can they when they are flying drones named Predator and Reaper?

Operating drones can create an emotional divide, where officials assign soldiers to covert missions, giving them just the target and eliminating their worries of anything else.

This is not to say they won’t develop some type of post traumatic disorder when it is all said and done, but it will be much different than disturbing visual images appearing in their head if they were fighting on the ground. There is a serious disconnect that arises when a solider can control a drone from behind closed doors.

We can’t we really blame the soldiers themselves when they are merely being trained by their superiors, handed the tools to “learn to fight” using training measures that simulate video games. That is the starting point to where soldiers lose the understanding of the seriousness behind the attacks and the human cost of war.

Virtual war training is meant to take the solider out of the real life element of combat. The idea is to make it easier for you to be able to kill someone and not feel the pain of inflicting death on another individual. Trainers explain that that this will develop the solider into a better and more skilled fighter, because they are able to shoot and kill and aim over and over again until they get it right to a perfected skill set.

The result produces stronger fighters yes, but at what cost? After a solider develops the skill and trains in this fashion, it will be easier for them to disregard human life, and aim with the idea that there will always be just another target they must hit.

The CIA’s drone campaign in Pakistan is just another effort that has affected innocent civilians, killing between 740-884 people since 2004, including 176 which were children.

But that reality is not engraved into soldiers’ conscience, where they are participating in a “front line” war, but able to only see it behind their computer screens.

Welcome to the new war protocol.

Technology can be used to benefit our society; and in war, to make us safer, stronger, and smarter than our opposition. Simultaneously, morality should not be sacrificed by forgetting innocent civilians affected by these drone attacks.

A divide is created when a solider forgets what’s on the other end of his missile, and won’t think twice if it feels like he’s in a real life video game. This dehumanization begs some serious questions that need to be considered.

It’s true we want to protect our soldiers and bring them home, but it is also our duty to save lives of innocent individuals, and realize casualties are more than just a notch on our belt.