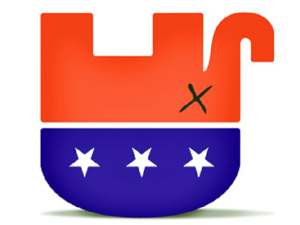 Robert Spencer is feeling pretty downcast these days. Scrolling down his blog, past some Veterans’ Day-themed moaning about how the West is betraying its glorious dead, you will find him bitterly griping that, “The Republican Party is a useless collection of me-tooists and slow-downers who have virtually no chance of winning national elections anymore.”

It’s not great mystery why Mr. Spencer is sounding so disheartened, even setting aside Mitt Romney’s defeat, as some of his favorite congressman, comprising a good chunk of the so-called “Anti-Islam caucus,” suffered a set of truly astounding set of setbacks on Election Day.

Rep. Allen West, who once called Rep. Keith Ellison, a Muslim, “someone that really does represent the antithesis of the principles upon which this country was established,” was defeated. Illinois’s own Rep. Joe Walsh, who this summer named several suburbs within his own district where he claimed Muslims were plotting to kill Americans, was defeated. Rep. John Fuqua, who sees the expulsion of all Muslims from the United States as the only solution to “the Muslim Problem,” was defeated. All in all, it was a bad day to be an anti-Muslim extremist in Congress.

Tempting as it is, it would still be unwise to point to these congressmen’s views on Islam as the only cause of their defeats. Certainly none were strangers to bizarre or moronic positions regarding other matters, West having once accused roughly 80 House Democrats of being card-carrying Marxists, while Fuqua was an advocate  of legalizing the death penalty for disobedient children.

No, the reasons for Tuesday’s result go deeper. A day upon which American elected its first Hindu, first open lesbian, and first Asian-American woman to Congress, while Spanish-speaking Puerto Rico moved closer to statehood, shows the changing face of American politics. The GOP’s real problem is that as the United States diversifies, the party is moving in an ever more nativist and xenophobic direction.

Joe Walsh and those like him can keep going before Congress holding toy alligators to demonstrate their commitment to immigration reform even if it involves building a moat filled with alligators on the border with Mexico, but they are rapidly going to find out that these sorts of stunts are making them rapidly irrelevant to the modern electorate.

It is often thought that it is GOP opposition to immigration is the root of their problems with non-whites, particularly with Hispanics. However, the party’s problems now go far beyond merely the immigration issue. The Republican Party has allowed itself to degenerate into a party of extremists pandering to a shrinking white base. Forget the “Party of Lincoln;” even Ronald Reagan would be unelectable for today’s purity-obsessed conservatives (remember that he granted amnesty to millions of illegal immigrants in 1986. Do you think he could survive that on his record now?).

The post-mortems are sprouting up with all sorts of explanations for last Tuesday, but a good number focus on the fact that the Romney campaign based virtually its entire strategy on appealing to white voters. Former Secretary of State Condoleeza Rice, in appropriately diplomatic phrasing, said that the GOP’s “mixed messages” were making it hard to appeal to “important segments” of the American electorate. GOP strategist Leslie Sanchez was a bit more blunt about it, saying, “If Republicans don’t heed this warning, we are certainly in danger of becoming politically irrelevant at a national level.”

Muslim voters present perhaps the clearest case of the Republican Party’s refusal to reach out to minority groups. The GOP’s traditional messages of support for entrepreneurship, protection of civil liberties, and strong family values are perfectly capable of winning over Muslim voters. Indeed, they went overwhelmingly for George W. Bush in 2000. Meanwhile, Barack Obama has done much to antagonize these same voters through his rather shaky commitment to civil liberties and strong support of drone strikes.

Yet on Tuesday, Muslims went decisively for Obama at a staggering 85% rate, according to exit polling conducted by CAIR. Just over 4% voted for Mitt Romney, with the rest split among third-party candidates.

What could explain such a dramatic shift in just over a decade? The answer is that the Republicans have made it very clear since 2000 that Muslims are not welcome in their party. GOP leaders regularly make outrageous statements like “Sharia is a mortal threat to the survival of freedom in the United States and in the world.” Large chunks numbers of Republicans hold negative views of Muslims. The very word “Muslim” is now virtually a slur within the Party. The Republicans have all but begged Muslim voters to fill out their ballots for the Democrats.

It’s bad enough for them to lose the support of Muslims, politically active and represented in swing states as they are, but combined with their struggles with virtually every other religious and ethnic minority, the outside observer can’t help but wonder if the Republican Party has a future as anything more than a regional party in America.

The head of the American Conservative Union recently told Politico that “Our party needs to realize that it’s too old and too white and too male and it needs to figure out how to catch up with the demographics of the country before it’s too late.”

The future does not belong to cranks and ideologues such as Allan West or Joe Walsh. American voters sent that message loud and clear. It remains to be seen, however, if there are enough conservatives willing to hear it.