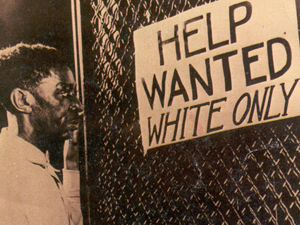 On January 31st, 1865, the U.S. House of Representatives passed the 13th Amendment to the Constitution, abolishing slavery in the United States. African Americans, in the legal sense, became “free.” But the segregationist policies of Jim Crow and the upholding of these policies with Plessy v. Ferguson, kept African Americans separate and certainly not equal.

In the 1890s, the first African Americans reaching adulthood who had never been enslaved became subject to studies by the likes of ethnologists, sociologists, and biologists who shared predisposed racist views against blacks.

According to Dr. Khalil Gibran Muhammad, former professor of African American history at Indiana University and current Director of the Schomburg Center for Research in Black Culture at the New York Public Library, it was the perfect moment for social scientists to prepare a “report card” on African Americans to see how they’ve fared as “free” individuals.

In a recent lecture at DePaul University, Dr. Muhammad explained that these social scientists’ findings revealed that blacks had more babies than whites and died at younger ages than whites. African Americans were also prevented from attaining basic literacy skills in many states, and thus, they produced low scores on literacy-based tests. African Americans, at the time, were also three times over-represented in the general prison population.

These findings were not surprising.

The skewed nature of these studies, since many social scientists were discriminatory against blacks, rarely, if ever, accounted for the conditions of African Americans under slavery and how those conditions might have affected them after slavery was abolished.

Muhammad argues that these reports brought great relief to white supremacists who thought African Americans would take control of the country once they were “free.” They feared that if blacks were “left to their own devices, outside of the supervision of whites, they would revert to self-destructive behavior,” and would be a “threat to society.”

This data is documented in Muhammad’s The Condemnation of Blackness: Race, Crime, and the Making of Modern Urban America. In his book, Muhammad emphasizes that one of U.S. society’s major afflictions when it comes to African Americans is that there is an “unspoken acceptance that there is something wrong with young black people, particularly young black men.”

In the 21st century, however, there seems to be an unspoken acceptance that something is wrong with Arabs and Muslims too, particularly young Arab and Muslim men. This widely held belief was cemented by 9/11 and subsequently led to legislation that made Arabs and Muslims suspect of criminality and subject to racial profiling.

This is highlighted by the “special registration” program that was implemented by the Department of Justice Immigration and Naturalization Service (INS), requiring “certain non-immigrant aliens” (referred to as “visitors”) to register with the U.S. immigration authorities, be fingerprinted and photographed, respond to questioning, and submit to routine reporting.

With the subsequent introduction of The PATRIOT Act, the state of Arizona’s SB 1070 bill, the NYPD’s Stop and Frisk and surveillance programs, as well as the NDAA 2012 indefinite detention provision, legislation that is rooted in racial profiling has essentially replaced the language of the old Jim Crow.

Furthermore, now it’s not just African Americans feeling the direct impact of racial profiling legislation. Now anyone that fits the “description” of an Arab, Muslim, Latino, and/or African American is subject to having their constitutional rights stripped from them.

In the 21st century, the new Jim Crow presents racist policies under the guise of national security.

The narrative of the “other” is as old as Jim Crow;  as it has sustained itself through decades of stereotypes cultivated in the mainstream media.

It’s the same old story. Recycled stereotypes of Arabs and Muslims as terrorists and African Americans as violent criminals continue to dominate news reports, radio programs, TV shows, and movies. The breadth of content and the ability to create content on the Internet has only exacerbated the issue.

The mainstream news media, in particular, has not only perpetuated the discriminatory ideas behind these types of programs and legislation, but they have also failed to seriously address racism, discrimination, and the unconstitutionality of these new laws.

One of the more poignant dilemmas with these media portrayals is that they present particular racial, ethnic and religious groups as being the cause of various societal problems. However, what isn’t presented in this ongoing narrative is that these groups are targeted scapegoats.

The connection between African American struggles in the Jim Crow era and the struggles that Arabs, Muslims, and Latinos have faced in the post-9/11 era are remarkably similar. Hate crimes, discrimination, incarceration, and deportation, have tremendously impacted impacted these communities.

While the accelerated erosion of civil liberties based on the premise of profiling continues in the U.S., it brings into question the effectiveness of our current civil rights laws. How valuable are they when post-9/11 policies have essentially contradicted the U.S. Constitution?

Dr. Aminah McCloud, professor of Islamic Studies in the Department of Religious Studies and the Director of the Islamic World Studies Program at DePaul University, believes that “civil rights is a project unfinished.”

To expand on McCloud’s point, will our civil rights project ever really be finished?

We will perpetually face new issues that concern our civil liberties, therefore we should see our civil rights project as forever malleable. Americans will always be faced with new grievances pertaining to equality.

But it’s not as easy as believing that racism will simply go away with the establishment of civil rights legislation; simply because law cannot eradicate what is in a person’s heart. Hate is hate, no matter what the law dictates.

It is dangerous to fall victim to the illusion of progress regarding racial equality; the idea that the Civil Rights Act of 1964, affirmative action, and having a half African-American President somehow has propelled our nation into a post-racial society. None of these instances have proven to tackle the issue of racism directly.

We have learned from history that you can legislate civil rights laws for freedom and equality but you can’t legislate hearts and minds.

The media, which contributes to how we shape our perceptions, can play a tremendous role in elevating the discussion about racism in the U.S. Instead of ignoring the issue of racism, or routinely perpetuating stereotypes, media outlets can choose to explore the issue and assist the public in reaching more informed and educated conclusions on how to solve one of the most debilitating aspects of our society.

It is also up to mass movements and interfaith/interethnic/interracial coalitions to think deeply about where we stand and what course of action we’ll take in addressing racism as not only a legal issue, but also an issue of morality.