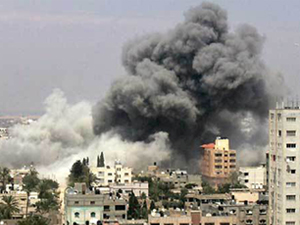 In light of the recent conflict between Israel and Hamas, major news networks like BBC and the New York Times have really outdone themselves in trying to report the “truth” of the events as they unraveled–that is, if you consider a grossly incomplete narrative to be the “truth.”

They made sure to report on the number of rockets fired at Israel from Gaza and the number of casualties incurred on both sides.  But, their reporting fell short when it came to factoring in the devastating extent of the Israeli occupation of Palestine, seriously bringing into question the credibility and objectivity of their reporting.

In one of its very first reports on the conflict, BBC starts out the article, “Israel hit by fresh volley of rockets from Gaza,” in this way:

“A fresh volley of rockets from Gaza have hit Israel amid some of the most intense cross-border fighting in weeks.  Israel says 11 rockets landed, one of which fell next to a house in Netivot.  Several people were treated for shock.”

According to the Electronic Intifada, academics from all over the world, in a joint letter, condemned the fact that major media outlets failed “to report on recent killings of Palestinian civilians by Israeli forces in Gaza:”

“News items overwhelmingly focus on the rockets that have been fired from Gaza…What is not in focus are the shellings and bombardments on Gaza, which have resulted in numerous severe and fatal casualties.  It doesn’t take an expert in media science to understand that what we are facing is at best shoddy and skewed reporting, and at worst willfully dishonest manipulation of the readership,” they said.

So, what purpose might the withholding of the number of bombs Israel dropped on Gaza serve in the media’s fable about Israel and Palestine?  For one, it misleads readers into believing that the Palestinians were the instigators of violence and aggression while Israel is the victim, when history clearly tells us that this is not the case.  Therefore, the history of occupation, apartheid, settler colonialism, and ethnic cleansing of the Palestinian people becomes a negated narrative.

And when looking directly at the number of casualties as of recently and in history, we see this negated narrative of oppression even more clearly.

On November 18, 2012, the Institute for Middle East Understanding (IMEU), released a report on the number of casualties since November 14:

The IMEU goes on to further state that the “disparity in civilian casualties is representative of a historic pattern, with a disproportionate number of Palestinian and other Arab civilians killed and wounded in virtually every phase of the conflict since Israel’s creation in 1948.”

The fact that Palestinians have no established military, while the Israeli Defense Force (IDF) receives military aid from the United States in billions of dollars every year; the fact that 1.7 million people are crammed into a prison camp of 140 square miles; the fact that the calorie intake of every Palestinian individual is calculated to just the enough amount in order to “avoid a humanitarian disaster;” and the fact that Israel’s occupying powers and war crimes have been reaffirmed by the United Nations, the Red Cross, Human Rights Watch, Amnesty International, and even the U.S. State Department is greatly indicative of the type of skewed reporting we are receiving in the story that portrays the victim as the oppressor, and the oppressor as the victim.

And while the loss of life–whether it is Palestinian or Israeli civilians–is detestable on any account, there needs to be an awareness for the disproportional amount of Palestinians, many of whom are women and children, who are living in a constant state of terror.

As Yasmeen Alkhoudary, a Palestinian, documented in the recent attacks:

“Israel…will probably use the leaflets in defending itself in case more civilians are killed tonight (which they probably will, given Gaza’s high population density). Any civilians who get killed in the way are either “collateral damage” or human shields used by Hamas. We know the narrative by heart.  But when a 7-year-old child carries his 2-year-old brother after their parents were killed by Israel, and when a one-year-old baby tries to play with his dead 8-year-old sister, you are left to question the little faith you have in humanity. Meanwhile in Israel, the Jerusalem Post shamelessly features articles about pets feeling anxious every time the bomb sirens go off.”

As Mark Steel tells us in The Independent, we have to “stop pretending Israel’s massacre in Gaza is part of an even battle with Hamas and the Palestinians.”

As an attendee of the American Muslims for Palestine (AMP) conference over the weekend, I watched Nihad Awad, the Executive Director and founder of the Council on American Islamic Relations (CAIR) say this about the movement to free Palestine:

“[The movement] is not about emotions but the facts.”