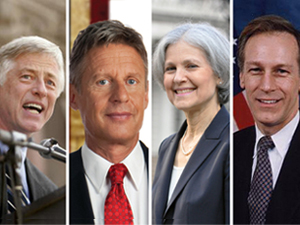 Upon watching the presidential debates between only President Barack Obama and Governor Mitt Romney, viewers had almost no way of knowing that there were other presidential candidates on the ballot until they actually got to the polls on November 6.

Why?  Because the “third party” presidential nominees were not even invited to participate in any of the three Obama-Romney-only debates.

This is mainly because both the Democratic and Republican parties exclusively negotiate a contract with each other that sets the terms for the presidential debates behind closed doors during every election.

George Farah, the author of No Debate:  How the Republican and Democratic Parties Secretly Control the Presidential Debates, tells us this:  “There is a 21-page contract that was negotiated by the Republican and Democratic parties, by the Obama campaign and the Romney campaign, and it dictates the terms of the presidential debates that we’re seeing this election season.”

In other words, the debates were not as frank and open as we thought they were:  they are constructed by the two parties who are supposed to represent distinctly different positions. This is where the idea of two separate parties starts to break down. If these parties can come together to stage a whole debate process, and agree to the same terms and conditions then aren’t they technically on the same side?

Since they were not invited, third party candidates had their own debates on October 23 at the Hilton Chicago Hotel through the Free and Equal Election Foundation.  The debate was moderated by Larry King and Christina Tobin.

The four other presidential candidates were Jill Stein of the Green Party, Rocky Anderson of the Justice Party, Virgil Goode of the Constitution Party, and Gary Johnson of the Libertarian Party.

“Even if one had wanted to watch these debates, they were impossible to find on television, or even on any major news stations’ websites. The reason simply is that no networks picked it up,” continued Shuba.

The media’s silence in regards to these candidates is very deafening, since it provides them with absolutely no exposure to the general public and therefore no real chance of making their voices (or the issues they are concerned with) heard, let alone getting elected. This silence becomes a way of limiting voters’ choices to only two choices: Republican or Democratic.

Under the Communications Act of 1934, Congress required that “radio and television stations and cable systems which originate their own programming to treat legally qualified political candidates equally when it comes to selling or giving away air time.”

However, in an amendment to this “equal time” rule, Congress created four exemptions:

“Stations who gave time to candidates on regularly scheduled newscasts, news interviews shows, documentaries (assuming the candidate wasn’t the primary focus of the documentary), or on-the-spot news events would not have to offer equal time to other candidates for that office.”

According to the Museum of Broadcast Communication, Congress had passed this amendment in order to allow stations the “freedom” to cover certain candidates, even if “tangentially,” without giving equal time to others.

In other words, by suspending the “equal time” clause, third party nominees have been barred from participating in debates since debates are considered to be “on-the-spot news.” They don’t have to give equal time to any party outside the bipartisan majority.

The League of Women Voters criticized the amendment for “[expanding] the all-too-powerful role of the broadcasters in elections, which is both dangerous and unwise.”

In addition to the virtually non-existent coverage about third parties and the consequently the emerging duopoly system, the objective reporting style of major American news outlets continue to serve biased assumptions and the political agendas.

When CNN declared Romney as the “winner” of the first debate, they cited a survey they conducted “immediately after” the debate that showed 67% of registered voters believed Romney to be the winner.

And while this poll is supposed to help reaffirm the statement that Romney had “won” the first debate, it is just a small example of how “facts” like this can distract the viewer into believing that they are getting a complete and “objective” piece of news.  Instead, what it does is severely limit the focus of the article citing it to merely just the dynamics of the debate.

The article, “What’s next: Can Obama recover or will Romney run up the score,” for example, uses this poll to focus solely on what Romney’s success can mean for future debates with Obama. It does not, however, go into detail about the issues discussed in the debate and each candidate’s response.

This type of reporting is what Glenn Greenwald calls “faux objectivity of journalists.”  It is the type where the views of the Republican and Democratic parties go largely unquestioned:

“Indeed, one of the most strictly enforced taboos in [the] establishment of journalism is the prohibition on aggressively challenging those views that are shared by the two parties.  Doing that makes one fringe, unserious and radical:  the opposite of solemn objectivity,” says Greenwald.

Greenwald tells us that this prevalent system of so called “objective” reporting in the American news media is a way that journalists distinguish between “real reporters” and “opinionists,” or partisans.

This “View from Nowhere,” is a stance that is believed to engender “more authority than any other possible stance,” Greenwald explains.

However, “[t]he reality is that, as desperately as they try, virtually no journalists are driven by this type of objectivity. They are, instead, awash in countless highly ideological assumptions that are anything but objective,” he says.

Greenwald cites the example of the journalist, Martha Raddatz, who moderated the vice presidential debates. When Raddatz changed topics to talk about Iran, she said: “Let’s move to Iran. I’d actually like to move to Iran, because there’s really no bigger national security…”

The fact that Raddatz labeled Iran as a national security threat/issue, notes Greenwald, shows how she is embracing the ideologies of the “bipartisan DC class that always needs a scary foreign enemy,” when in reality, this claim has been “debunked in multiple venues.”

The media’s effect in silencing alternative, third party voices is unquestionable as was just demonstrated, but as Larry King noted, “[i]t’s easy just to sit back and watch, but these people [the third party candidates] are standing up.”