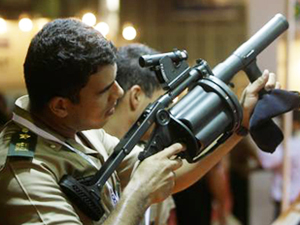 The countries of the Western world, specifically the United States, have always prided themselves on being the champions of democracy, freedom, and human rights.  Throughout the last century alone we saw wars fought all across the globe in the name of these ideals. In recent memory, the West, led by the U.S., has intervened in several cases to rid a country of an authoritarian government and put in its place a more democratic system. However, there is also a long track record of propping up regimes, for strategic and economic reasons, that embody everything the West claims to stand against.

During the Arab Spring, when the populations of many Middle Eastern countries rose up to challenge oppressive regimes through peaceful protest, they were pelted with both non-lethal and live ammunition, run down by armored vehicles, and suffocated with tear gas.  And while the western nations’ leaders were quick to condemn such state sponsored violence, and call for the resignation of these tyrannical governments, the protesters themselves were holding up tear gas canisters that read “Made in USA,” though these images never made it onto mainstream American news programs.  Furthermore, the armored cars running down peaceful protesters and the assault rifles and ammunition used to kill people calling for democracy, were almost all supplied by Western governments or arms corporations.

A study done by Al Jazeera, focusing on the arms flow to the five main countries that experienced such uprisings – Bahrain, Egypt, Libya, Syria and Yemen – seems to contradict the notion of the benevolent, freedom loving, democracy promoting Western states.  In every case of uprising, the established regimes in these countries used violence to quell peaceful protests, committing serious violations of human rights, and in every case, the United States quickly condemned them.  However, a quick look into the flow of arms to these countries reveals that the United States itself provided the means for most of these governments to commit such atrocities.  “The United States has far outpaced all other countries in arms exports to the five countries mentioned in the report, approving sales worth roughly $1.1 billion between 2005 and 2010, all but $100 million of which went to Egypt.”

The United States is in the process of brokering a new deal with the Bahraini monarchy worth an estimated $53 million, which would supply the regime with new Humvee armored cars and bunker busting TOW (Tube-launched, Optically-tracked, Wire command data link, guided missile) missiles, despite the violent crackdown on protesters that the U.S. itself had condemned.  In recent news, the Bahraini monarchy has announced that it has revoked the citizenship of 31 people, including two former members of parliament, for their participation in protests against the kingdom for democracy.

The U.S. has also provided significant degrees of military aid to other countries in the region with long track records of human rights violations and non-democratic institutions.  From 2001 to 2011, the U.S. has sold roughly $8.156 billion worth of weapons to Oman, Saudi Arabia, and the United Arab Emirates (UAE), not including the recently agreed upon deal to sell $30 billion worth of fighter planes to the Saudi monarchy and another deal to sell $7.6 billion worth of THAAD (Terminal High Altitude Area Defense) missiles to Oman and the UAE.  Solidifying our relationships with such countries, specifically through military aid, ensures that such undemocratic regimes will remain in power, and have the capacity to forcefully “persuade” their populations from striving for change.

So what does this say about the West’s dedication to the ideals of democracy, freedom and human rights?

In his final speech, delivered on January 17th, 1961, President Dwight Eisenhower warned of a future dictated by an unchecked military industrial complex.  At that time, America had fought one of the worst wars the world has ever seen a mere 16 years before – a war that would change the country forever.  Though the U.S. emerged victorious, and the most powerful nation on the planet due to this victory, it found itself in a heated contest with the Soviet Union, whose own might was comparable to that of America’s.  And in this atmosphere the President recognized that there was a need to establish a well-armed, professional military to deter its enemies from attack.  President Eisenhower also recognized that the immense size of this military, and all of the economic, industrial, and political resources needed to support it, could quickly rise to dominate the countries government and citizenry:

The total influence – economic, political, even spiritual – is felt in every city, every State house, every office of the Federal government. We recognize the imperative need for this development. Yet we must not fail to comprehend its grave implications. Our toil, resources and livelihood are all involved; so is the very structure of our society.  In the councils of government, we must guard against the acquisition of unwarranted influence, whether sought or unsought, by the military industrial complex. The potential for the disastrous rise of misplaced power exists and will persist.

The President’s statement is terrifyingly prophetic.  Ever since the end of the World War II, the U.S. defense budget has steadily risen, to the point where, in 2011, it came in at roughly $689.591 billion, according to the Stockholm International Peace Research Institute (SIPRI).  To put this into context, that means that, in 2011, the U.S. accounted for roughly 40% of the entire world’s defense budget.  But these numbers do not take into account the global arms trade, or the record profits made by private corporations with close ties to Washington.  Though the U.S. government only took in roughly $9.984 billion from arms transfers to other countries in 2011 (compared to roughly $5.9 billion in 2001, a nearly 70% increase), the top 100 private arms manufacturers from around the world generated a little over $400 billion in revenue, as revealed by The Guardian’s Ami Sedghi (UK).  Of those 100 global arms manufacturers listed, 47 are based in the US and accounted for nearly $339.8 billion of the total, with Lockheed Martin taking in $35.7 billion alone – 44 of the remaining 53 corporations on the list were also based in Western states.

War has always been profitable to arms manufacturers, but the decade long War on Terror has created opportunities for these corporations to post record profits through the development and trade of increasingly lethal weapons, along with relaxed regulations governing the sale of arms to other countries and non-state entities in conflict plagued regions around the world.  According to armscontrol.org,

Immediately after the attacks of September 11, the Bush administration proposed allowing arms sales to potential anti-terrorist allies that had previously been blocked from weapons transfers because they had committed significant human rights violations, lacked sufficient democratic institutions, had been involved in acts of aggression, or had tested nuclear weapons.

Weapons sales to countries like these have fueled internal conflicts and regional instability around the world.  Furthermore, sales of this nature severely undermine America’s, and the West’s, stated mission goal of promoting a peaceful, free, and democratic world. “By providing military assistance with a disregard for human rights conditions, the United States is not only giving up the opportunity to use military assistance as leverage to improve human rights conditions, but is also rewarding abusive governments for their unconscionable actions.”

In recent years, with the War on Terror well established, countries with appalling human rights records have pledged to support the U.S.’s War on Terror in hopes of receiving Western military aid – and in many cases this tactic has proven successful. But as armscontrol.org has pointed out, there is very little the U.S. can do to control these weapons once the transactions have been completed.  “[T]he reality is that once these weapons leave U.S. possession and training courses are completed, the United States cannot control how or by whom the weapons are used or the training is implemented.” In many cases, the Arab Spring being a clear example, the states turn these weapons against their own people.  Furthermore, many of these states have realized that it is in their interest to undermine the War on Terror, ensuring that the arms flow into their countries will continue as long as the terrorist threat is not fully eradicated.

Though there are clear economic incentives to maintain the global arms trade, there are also costs, both diplomatic and human.  Diplomatically, the continuation of such arms transfers undermines the notion that the US and the West is seriously committed to promoting a free, democratic, and peaceful world. The West has supported ruthless governments through military aid for the better part of the last century, from Charles Taylor in Liberia to Muammar Gaddafi in Libya, and it is the people of these states that have paid the price for these arms sales – they have not forgotten.  Though this issue is rarely, if ever, covered on the mainstream American news sources, leaving most of the American public completely unaware of its nature, the developing world has witnessed its impacts first hand. So, when we ask ourselves as a nation, “Why do they hate us so much?,” we need only look at our long track record of supporting and enabling the longevity of these violent, undemocratic, and in some cases genocidal regimes. And if we are truly committed to ridding the world of terrorism, one step on that path may include eliminating our support for state terrorists.

In his final speech, President Eisenhower made clear that, in order to protect ourselves, and the world, from the ever growing influence of the military industrial complex, we must maintain an educated and informed population. “Only an alert and knowledgeable citizenry can compel the proper meshing of the huge industrial and military machinery of defense with our peaceful methods and goals, so that security and liberty may prosper together.” Considering that America now ranks behind countries such as Mongolia, Estonia, Poland, and many more, in terms of our national IQ, it would seem that we have failed to uphold this fundamental obligation of checking our military might to ourselves and the world.

As Americans, we are fortunate enough to have the right to tell our elected representatives that we do not support the multi-billion dollar arms trade in the developing world.  Promoting democracy is not compatible with providing weapons to regimes that punish people for speaking up for their rights, and it is critical that we stand up in opposition to the military industrial complex if we truly wish to promote freedom, democracy, and human rights around the world.  Every dollar spent on the production and shipment of weapons is a dollar not spent on the education of our children, the alleviation of poverty and hunger, the development of life saving drugs, the providing of care to our senior citizens and veterans, and so much more.

Thousands of Chicagoans March for Palestine

What’s in a name: Challenging the word “Islamist”