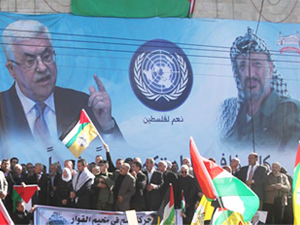 On November 29, Palestinians in the West Bank took to the streets to celebrate the birth of a Palestinian “state.”  With people dancing, flags flying high, and music blaring in the background, Al Jazeera reporters were barely discernible over the noise as they reported the events on the ground.  You couldn’t find a more patriotic or euphoric moment it seemed–some have even called this moment a historical benchmark for Palestine.

But does this patriotically painted moment of success really live up to its hype? Have Palestinians gained any real progress towards a peaceful solution with Israel under the new label of “statehood?”

The answer, sadly, is no. In fact, while the United Nations’ vote to make Palestine a “nonmember observer state,” gives it new ranking and authority to challenge Israel in international legal forums such as the International Criminal Court (ICC) for war crimes the Israeli government has committed against the Palestinian people, it does not seem that this is likely to occur anytime soon or at all.

Justice might not be fully served as the Palestinians and the whole world had been prematurely lead to believe.

“Today’s grand pronouncements will soon fade,” said Susan E. Rice in the New York Times, the U.S. ambassador to the United Nations. “And the Palestinian people will wake up tomorrow and find that little about their lives has changed, save that the prospects of a durable peace have only receded.”

Rice is absolutely spot on. Mahmoud Abbas, leader of the Palestinian Authority (PA), and the one who sought the U.N. bid was quick to reaffirm this fact only just a day after he received U.N. state recognition for Palestine.

AlJazeera quoted Abbas: “We now have the right to appeal the ICC, but we are not going to do it now and will not do it except in the case of Israeli aggression.”

Quite a preposterous statement, to say the least, coming out of the Palestinian president’s mouth, considering that only a few weeks before the U.N. state recognition, the Gaza strip was heavily bombarded by the Israeli Defense Force (IDF), resulting in more than 160 dead Palestinians, a majority of whom were civilians and children.  How can an event like this this not be defined as “aggression”?

According to Ali Abunimah, founder of The Electronic Intifada, the Palestinian bid for statehood was a “hollow” act, because “[t]he Abbas PA’s record of collaboration with Israel against the interests of the Palestinian people is long, shameful and well documented.”

In fact, Joseph Massad, from the Guardian says that there’s “bitter irony in the UN’s recognition of a much-diminished Palestinian state on the anniversary of its 1947 partition plan.”

This, he says, enforces and “legitimizes” a “racist status quo,” since the Palestinian Liberation Organization (PLO), which the U.N. has recognized as the only legitimate governor of the Palestinians in both the West Bank and Gaza, was undermined when the Oslo Accords created the PA, which “ceased to represent Gaza Palestinians [in 2007], now represented by Hamas.”

This means that nothing has changed. Palestine continues to be divided not only geographically, but also politically, as it is further “partitioned” with the PA’s bid for West-Bank-only statehood and the Palestinian president’s complicity with Israeli policies.

What the U.N. vote has done is leave the PA “without legitimacy or an end goal to its existence,” said Massad.

This is further reiterated by Israel’s response to the Palestinian statehood vote. In retaliation for seeking and receiving statehood, Israel has announced that it will build 3,000 new settlement homes in the E1 section of the West Bank which is on Palestinian land, further dividing the West Bank in half.

Palestine, effectively divided by apartheid policies, colonialism, and government complicity, is a state without “borders.”  It has no geographically defined land to rule over the affairs of its own people, and thus no real standing in the larger scope of the territorial conflict. At this juncture, perhaps proactive measures to pursue prosecution against Israel at the ICC might be the Palestinian Authority’s last best hope.