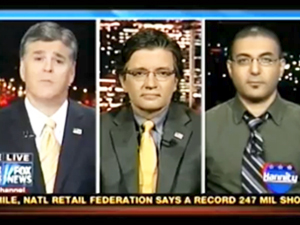 There is actually some truth to the claim that Fox News is “Fair and Balanced.” CAIR-Chicago director Ahmed Rehab’s recent appearance on the The Sean Hannnity Show to discuss the deteriorating situation in Egypt confirmed that Fox is perfectly capable of being both fair and balanced. The catch though, is that such treatment only is given to those who subscribe to the network’s right-wing ideology. Anyone else is going to find themselves out of luck.

When one watches the YouTube version of the broadcast, it is simple to note that it takes exactly ten seconds for the truth to begin to suffer, when host Sean Hannity, in his introduction, describes Egyptian President Mohamed Morsi’s recent power grab as “unmitigated,” which no doubt would come as a surprise to the officers of the Egyptian military, who remain very much capable of mitigating Morsi if they so choose. Hannity’s poor word choice though, is a relatively minor problem given how the rest of the interview went.

He began the exchange by asking Rehab whether this was the democracy Egyptians had dreamed of when they overthrew Hosni Mubarak. Democracy in Egypt, though, is not actually his concern here. He makes clear that instead it is how the Muslim Brotherhood “rushed to Hamas’s side” after the crisis in Gaza erupted (an interesting choice of phrasing when Morsi notably failed to even mention Hamas in his first address on the issue, let alone provide any real aid to the group), as if that was the most serious threat that Egyptian democracy faces at the moment.

Whether or not the Egyptian public might have actually sympathized with Hamas over Israel is of course never even considered, as “democratic” means “in line with what Sean Hannity thinks” for the purposes of the interview.

Rehab refuted him by pointing out Morsi’s leading role in brokering the cease-fire, an opinion well in line with the assessment of American officials. Hannity opts not to respond to this and instead points out that Morsi is a 9/11 Truther and has said reprehensible things about Israelis. Both true, but anyone hoping he would share how rhetoric outweighs concrete actions was left unsatisfied.

The parade of questionable assertions comes to a temporary close as Hannity refers to the Muslim Brotherhood as a “terrorist organization.” That may very well be his opinion, but it is an opinion not shared by the American government.

Now it is Zuhdi Jasser, the other guest on the program, whose turn it is to speak. Rather than the barbed questions given to Rehab, Jasser is given softball questions like “Will this period be remembered as the rise of the radical Islamists?” (as if there was the faintest chance that Jasser would say “no”). Jasser also receives the privilege of not being interrupted by Hannity no matter how bizarre the assertion, a courtesy which was not extended to Rehab.

For example, when Jasser blithely asserts that the Brotherhood is “worse than Mubarak” because they are “dictators on steroids” he is not challenged. His support, such as it is, for this claim is twofold. The first reason is because Morsi held a meeting with Iranian President Mahmoud Ahmadinejad and the second is this supposed support that the Brotherhood has given to Hamas. It seems for Jasser a summit meeting with the Iranian President is far more serious than a thirty-year dictatorship with thousands imprisoned for their political beliefs. Hannity, of course, lets this slide.

Interestingly, Jasser asserts that the Obama administration “allowed” the Brotherhood to hijack the revolution while simultaneously arguing that American soft power in the region has disappeared. This begs the question: If America really has no soft power in the Mideast, how can it be expected to influence the course of events in Egypt? Was Jasser suggesting a military invasion to drive out the Brotherhood? Sanctions? Unfortunately, he is not pressed on this point either, so we’ll never know.

Hannity, rather than deciding to reprimand Jasser for baseless name calling, instead joins in and asks Rehab whether he is a Brotherhood member. Rehab’s empirical support for liberal democracy in Egypt proved to be inconvenient, so it was simply ignored.

The charade ends with Rehab referring to Jasser as “a sock puppet” for the Islamaphobia movement. Jasser, naturally, becomes greatly offended now that he is the one being called names. “All you do is stoop to attacks rather than deal with the subject,” he said in response, although the critical viewer will note that Rehab has been the only one seriously attempting to deal with the subject at hand the entire time.

The course of the discussions reveals something important: Jasser and Hannity had already decided what they thought about Egypt before the camera had even started rolling. Rehab was not invited to be a legitimate participant in a discussion, but rather to serve as a straw man as the two other men dished out half-truths and blatant lies to their receptive audience. At no point was a serious discussion on this issue ever intended.

At this critical time for Egyptian democracy, America would benefit immensely from informed commentators discussing the events calmly and respectfully. It is thus unfortunate that no such thing can be found on Fox News.