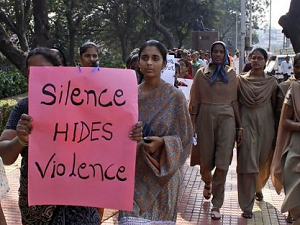 Rape is a topic that is hard for anyone to tackle. It is one of the most tragic crimes that is committed to many, but more so as an act of violence against women.

As Noor Salahuddin, acknowledged in her article, there is a global rape epidemic:

“Can rape really be controlled by how women act? And does it not make more sense to shift the responsibility from women to men, and argue that men should not rape, instead of insisting that women must try not to get raped? Why can we not agree that we live in a patriarchal, misogynistic world where, in many countries, women are not respected?  And why must we pretend that women are not careful enough to resist sexual violence and that in order to not become a statistic, they must spend their entire lives in fear?”

To take her argument further, the rape epidemic that has been occurring for many years, which has now reached international attention, is a result of a specialized culture that gives men one set of rules and women another. This perpetuation of blaming women for their own rape, either for dressing a certain way or leading a man on, is embedded in a societal exception for women to be submissive and subordinate.

The rules given to men, which includes purported ideas of the social  construction  of masculinity that includes ideals of being independent, in control, tough, and respected, are purposefully structured,  all in  an effort to be seen as a “real man.” Coupled with societal expectations, the media also helps construct violent  masculinity as societal norm. So it’s hard to swallow, but if a woman says “no” it is believed that she is just playing hard to get, and when a woman is dressed a “provocative” way, she’s “asking for it,” and if assaulted she supposedly “deserved it.”

A woman should not be thought of as just her body and all that comes with it, but society does not teach men, in many cultures, that is the case.

However, in light of two broadly different cases–we see this happening. In New Delhi, India, 23-year-old Jyoti Singh was brutally assaulted and raped and ultimately died. When the news broke, it shook not only India, but became international news. Singh became “India’s Daughter.” Protesters took to the streets, largely women, calling for justice and a change in the culture of how women are viewed and treated in the country. In other parts of the world, even right here in the U.S., outcry and disbelief illuminated news of the incident. This case and the events that followed, was unpacking a tough issue and laying groundwork for change and culture.

On the other side of the globe, in the small Ohio town of Steubenville, the tables were turned. In a Law and Order: SVU-esque turn of events, a 16-year-old girl was supposedly kidnapped, drugged, urinated on and raped by some of the town’s local high school football players—now known as the Steubenville rape.

And in this prideful, football-driven town, there was nothing like one that happened in India for Singh. Instead, the football heroes were protected and defended for their actions by majority of the town, despite the photos and video that circulated on the web of the incident; this was thanks to internet “hactivists” known as Anonymous. No immediate action or wave of protest were on the streets in Ohio or anywhere in America like that of New Delhi–only Anonymous and their actors; they used a number tactics to shine a light on the story and the assailants. Journalists drew away from framing it just as they did with Singh. The stories that dominated media were about the local heroes and how they are handling the allegations, and very little coverage of the girl and the night that changed her life forever.

Culturally,  in the United States, it is very much like the case in India when it comes to women. Woman are viewed as a minority and seemingly characterized as second-class citizens. But, when Singh’s incident came to light, exploded in protest and when the Steubenville case broke victim blaming erupted instead. More broadly, the way the government handled the two events were also different. As the New York Times reported, “Compared to the much of the rest of the world, sections of India’s laws covering rape are inadequate and narrowly defined, critics say. And India’s way of delivering justice to rape victims is replete with loopholes, they say.” But now the government is reviewing the laws, they report.  In the U.S.,  this comes at a time where Congress did not allow the passing of Violence Against Women Act.

Nicholas Kristoff said in this New York Times column, “Americans watched the events after the Delhi gang rape with a whiff of condescension at the barbarity there, but domestic violence and sex trafficking remain a vast problem across the United States. One obstacle is that violence against women tends to be invisible and thus not a priority.” Kristoff also acknowledged, “ Women worldwide ages 15 through 44 are more likely to die or be maimed because of male violence than because of cancer, malaria, war and traffic accidents combined.”

As Mallary Jean Tenore stated in her article, “Rape isn’t as black and white as some other crimes, so it’s harder to cover. There are a lot of unresolved questions that journalists can’t always answer, such as: What effect is rape having on the victim and what effect will it have on her life? How will it affect her future relationships? How will it affect her view of herself? Journalists often focus on the accused. Will they be charged for the crime? If so, what will the charges be? Will they be found guilty or not guilty? Will they go to jail?”

This is important because it goes back to the ideal of societal and media construction not only on masculinity and violence against women, but how we view the events and the enormous effects this has on the victim and society as whole. More importantly, it’s bring light to what kind of culture to we live in and the question of what kind of culture is accepted.

We must ask, as Lauren Wolfe, director of the Women’s Media Center’s Women Under Siege project noted in an interview with Tenore,  “Why are there systems in place in [the U.S and many parts of the word] that allow rape to be committed over and over again in this country? Why are boys raised to think that rape with an unconscious woman can possibly be considered sex?”

We must also understand, and not ignore the idea, that gender violence and discrimination is not inherent–it is a social construction. It is a perpetuation of sexism and inequality masking itself as a social norm.