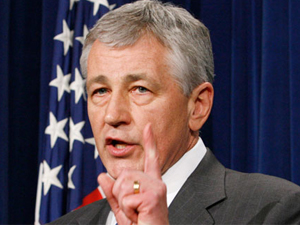 Charles Timothy “Chuck” Hagel is an ex-Senator, has spent most of his life in public service, politics, and consulting. He is a Vietnam War veteran, and earned two Purple Hearts through his service.

At a glance Hagel doesn’t seem too qualified for the job of Secretary of Defense, a position I can’t imagine many politicians desiring in a time of extensive budget cuts and with the calculated U.S. withdrawal from Afghanistan pending.  On the other hand, he certainly doesn’t seem under-qualified either. Hagel simply looks like a conservative, respectable, bipartisan choice for Obama’s second term cabinet, so why has he become the most talked about man in U.S. politics in the past couple of weeks? Perhaps it is because he is unconventionally rational, and rationality has become a lost responsibility in the American political spectrum.

Hagel is a lifelong moderate Republican, but his party has denounced him as of late. The left, too, has jumped on the Hagel-hating bandwagon; maybe there is hope that “bipartisanship” can still exist. No matter what one’s political persuasion, however, the discontent with Obama’s nominee stems from a few major positions Hagel has held in the past. First, Hagel does not support  unilateral sanctions on Iran, and he is against any physical confrontation with the State. Secondly, Hagel believes the U.S. should engage in diplomacy with Hamas but also believes in Israel’s right to defend itself. And finally because Hagel is an outspoken opponent of the war in Iraq, even after voting in favor of George Bush’s resolution for unilateral intervention in the Middle East.

Jewish lobbies have thus pegged him as an anti-Semite, and most lawmakers have called him an “outcast” for such unconventional takes. It seems however that in each of these areas Hagel is a lot more rational than his collogues would like you to believe.

Hagel does not support unilateral sanctions on Iran because he claims that they don’t work, but instead garner more public discontent within the state for the U.S.. Though this is an International Relations 101 argument against sanctioning, it is one that holds a lot of merit with regards to Iran. The U.S. has imposed countless unilateral sanctions for the last 33 years, and still today Iran remains resolute in its nuclear ambitions. Hagel’s call to perhaps adapt a new policy doesn’t seem so far fetched.

The loudest criticism of Hagel is for his views on Hamas. He disagrees with the universally stated American foreign policy platform that Hamas is a terror group that should not be negotiated with or interacted with. But Hagel’s viewpoint on Hamas does not seem completely ridiculous either. Hamas was democratically elected by Palestinians in 2006 and after violent skirmishes with the Palestinian Authority in 2006 and 2007, were forced into isolation in the Gaza Strip. In 2007, Israel imposed a devastating blockade of air, land, and sea on Gaza while Hamas acquiesced power and became the governing body of the Strip. The U.S. in its foreign policy is obligated to interact through diplomacy with all other States on earth. The fact that they do not agree with the platform of Hamas in its domestic and foreign affairs does not give the U.S. the right to eliminate them as a potential pathway to peace. No one has ever been bold enough within the Defense Department to take a different stance on Hamas. So after 65 years of trying many resolutions to reach peace in Palestine/Israel, Hagel’s suggestions to engage with Gaza are not totally farfetched or unreasonable.

Hagel has also been extensively criticized for initially voting in favor of the Iraq War, but then quickly speaking out against it throughout his incumbency. “Two-faced” and “indecisive” is what the blogosphere is calling him, but this is nonsensical. Seventy seven senators voted “yes” for intervention in Iraq.  If you choose to go vote by vote and call every senator who has flipped his stance a “hypocrite,” then our legislature is made up of the most deceitful, duplicitous government on earth, and we would have a lot more to worry about than the nomination of Chuck Hagel to Secretary of Defense. We, as well as Congress, were lied to continuously about Iraq; to change one’s stance in the light of truth is about the most reasonable action one can possibly take. I would like to praise Hagel’s humility for this, not condemn him.

Charles Timothy Hagel is not going to go down in history as decisive Defense Secretary. He is not going to bring about the demise of Israel. He is not going to open up our borders to an Iranian military insurgency. And he is not going to destroy the credibility of our military and what it stands for. Chuck Hagel will be responsible, credible, and if we are lucky, he may even stir innovation and gallantry into the pot that is simmering on the burners of the U.S. Department of Defense.

USA vs. Rasmea Odeh: Pro-Israel Judge Refuses to Step Down