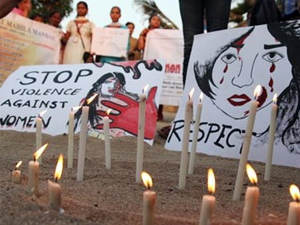 The night of December 16th, a 23-year-old medical student named Jyoti Singh Pandey and her male friend boarded a bus to take them home after watching Life of Pi in Delhi, India’s capital.

The six men already on board the bus, including the driver, beat the girl and her friend with a metal rod for more than an hour, gang-raped the girl, and threw both victims from the vehicle onto the road. Pandey, who has now become a symbol for outrage and resistance to violence against women, suffered extensive damage to her internal organs. A metal rod was inserted repeatedly into her body and removed with such force that it pulled out her intestines. Jyoti was taken to Singapore for an intestinal transplant but she succumbed to her injuries and died on December 29th.

Protests and marches for women’s rights blasted the incident and its perpetrators across the globe, especially in India. Millions of people, men and women alike, condemned the attack as a senseless, bestial act of violence against innocent civilians. Lawmakers in Indiaproposed stricter punishments for crimes of sexual violence. The six men accused of committing this heinous crime are charged with kidnapping, rape, and attempted murder. Their imminent conviction makes them eligible for the death penalty.

But even as Pandey was fighting for her life and afterwards, when the world was mourning her death, rapes and murders continued across Indiaand outside of the country. An 18-year-old girl from Patiala, another city in northern India, committed suicide after being raped. Not only was she molested, this girl was continually harassed by the local authorities and asked embarrassing questions about the incident itself, which drove her to kill herself. A nine-year-old girl was raped inBahawalpur,Pakistan after being kidnapped by three men from outside of her house. No arrests were made by the police.

While these crimes against women increase at an alarming rate, many have come forward to try and give solutions for this rape epidemic. Some have said that the responsibility of not getting raped lies with women. These critics argue that if women dressed modestly, if they were not out late at night, if they did not act in a promiscuous manner, and if they were more cautious, they would not be harassed or raped with such frequency. But how does this explain female and male children raped by adults?

According to the Rape, Abuse and Incest National Network (RAINN) in Washington, D.C., 15% of sexual assault and rape victims are under age 12. A 2010 study in the UK estimated that about 5% of all boys and 18% of all girls in the UK had been sexually abused. And in India, an alarming and rather frightening 53% of all children have reported physical, emotional, or sexual abuse. War torn regions like theCongo and nowSyria, are using terror, intimidation, kidnapping, and rape as tools to keep populations under control. Keep in mind that because most rapes go unreported, these are modest estimates.

Can rape really be controlled by how women act? And does it not make more sense to shift the responsibility from women to men, and argue that men should not rape, instead of insisting that women must try not to get raped? Why can we not agree that we live in a patriarchal, misogynistic world where, in many countries, women are not respected?  And why must we pretend that women are not careful enough to resist sexual violence and that in order to not become a statistic, they must spend their entire lives in fear?

The answer to these questions is that misogyny is rampant in our world today as it has been for centuries. If women survive nine months in the womb and are not killed at birth, they face discrimination at every turn in their lives. School for girls in the northern tribal areas of Pakistan are being ritually blown up and destroyed by extremists to discourage education for females. Even if young women from underprivileged strata of society manage to get their education, they are harassed at the workplace, while commuting to and from work, and worst of all, at home.

According to the website for Domestic Violence Statistics, every nine seconds, a woman is beaten or assaulted in America. In many Asian countries, women are expected to bring a dowry with them to their husbands’ house after they marry. If they refuse or if their in-laws are not satisfied, they will suffer death threats and risk physical or verbal abuse. There are hundreds of thousands of cases of women who have been burned with acid or set on fire because of disagreements with their husbands or significant others.

But this is not all.

Even women in positions of power and authority are routinely abused by their superiors. The Invisible War is an excellent documentary on the epidemic of rape in the United States military. According to the film, about 19,000 female soldiers were raped by their fellow male service members. All of the women featured in the documentary agreed that they were violated twice: once when they were abused, and secondly, when the military refused to help them or convict their attackers and conveniently covered up the attacks.

What is the answer to this epidemic?

As a young woman, I am deeply affected every time I hear about any incident of violence against women. No matter how I look at it, the solution to this epidemic is that we must respect women. Our media, society, and we ourselves must stop portraying women in a negative or stereotypical manner. Our mothers, sisters, daughters, and wives deserve better than to be treated with brutality. They deserve to be born, to have an equal chance at life, at an education, to marry of their own free will, and to have children if they wish. They deserve to be paid the same salaries as their male colleagues for doing the same work and they deserve to be treated with respect in our workplaces. Women constitute more than half the population of the world. Let their contributions to our society not go unnoticed. Let women live.

A culture of corruption: Pakistani politics and the future of a nation