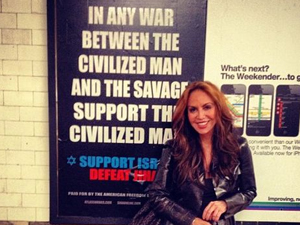 I recently joined the rarefied heights achieved by The Children’s Museum of Manhattan and Butterball Turkey in being recognized by Pamela Geller as an imminent threat to the survival of Western Civilization, thanks to my recent piece in the Monitor about the #MyJihad campaign. Rather than sitting back and basking in my honor, I would like take this opportunity to respond and correct some of the most egregious insults that the truth suffered in it.

First, I have never at any point denied that there are a minority of Muslims who do interpret the concept of jihad violently. No one is disputing that. If anything, the #MyJihad campaign begins by acknowledging the existence of problematic  interpretations by extremists (they and Geller included) and was created specifically to work against them; it should be earning Geller’s approval, not her scorn.

Geller then takes issue with how I call her ads “borderline fraudulent,” claiming that the quotes are all real. Actually, they are not. The quote attributed to Turkish Prime Minister, Tayipp Erdogan is in fact from a famous twentieth century Turkish nationalist poet. He read the poem at one point. That would be like the quote “To be, or not to be, that is the question” being attributed to me as my own quote, rather than to Shakespeare,  because I happened to recite Hamlet at one point. With such a screeching misunderstanding of the basic rules of source attribution, Geller would have failed AP English.

Having said that, what I was objecting to is how her ads are designed to look just like the original #MyJihad campaign ones. As I doubt she is paying the #MyJihad campaign an aesthetic compliment by her design choice, it would seem that she is instead making them look similar for the purpose of confusing people. In legal terms, it’s a service mark copyright infringement referred to as “false designation of origin” and is recognized as an illegal deceptive trade practice. I suppose if your ads can’t persuade people on their own merits trickery is always an option.

Geller is incredibly dismissive of my examples of how use of religion for violent ends is a plague that affects religions other than Islam.

On Uganda: I at no point alleged Joseph Kony was a mainstream Christian. However, the stated goals, for what they’re worth, of the Lord’s Resistance Army include a society based on the Ten Commandments. Kony accepting support from Muslims no more disproves my point than Osama bin Laden accepting American aid in the 1980s in Afghanistan proves he wasn’t motivated by Islam.

On Lebanon: I was pointing out that Muslims don’t have a monopoly on senseless violence in the modern Middle East. Whether or not the Lebanese militiamen were literally quoting scripture as they were killing people is irrelevant to that.

On Israel: Geller asserts I can make no case that Scripture caused the Stern Gang to kill anybody. Yet the group’s founder, Avraham Stern, laid out the founding principles of his group in his essay 18 Principles of Rebirth. The very first one begins by stating: “The Jewish people is a covenanted people”, which has an obvious implicit scriptural basis.

The second principle isn’t even implicit about its use of scripture: “The homeland in the Land of Israel within the borders delineated in the Bible (“To your descendants, I shall give this land, from the River of Egypt to the great Euphrates River.” Genesis 15:18)”

If the founder of a terrorist group writes an essay outlining his goals while explicitly citing Scripture, I believe that I can, in fact, make the case they used scripture to justify their crimes.

On Spain: She writes “Apparently Barry thinks that because Franco was brutal and Roman Catholic, therefore Roman Catholicism is inherently brutal” which is an awful lot of inference to draw from me writing the word “Spain” and linking to a book review of Francoist atrocities. (There is also a lot of projection here, because that kind of sloppy generalization is in fact the basis of Geller’s entire modus operandi against Muslims.)

What I was trying to say is that Franco’s killers were given religious support for committing horrific crimes, which is something Geller perpetually assaults Islamic clergy for doing. Historian Antony Beevor writes in his masterful book The Battle for Spain: “The repression became planned and methodically directed, encouraged by military and civil authorities and blessed by the Catholic Church.” (Pg. 88)

Moving past my regional examples, she asserts that I argue poorly because I am a “leftist,” an argument which she can’t honestly believe, given how she earlier quotes Christopher Hitchens as an authority. Though beloved by some on the Right, Hitchens was named in 2009 one of the most influential liberals in America and throughout his life retained affection for figures such as Leon Trotsky and Rosa Luxemburg, making him a leftist by virtually any reasonable criteria.

She considers it a smear that I bring up that she approvingly quoted a man who said that Khrushchev made a mistake in letting the Chechen Muslims return to their homeland after being brutally deported on Stalin’s orders in 1944. At least a third of all Chechens died during the next thirteen years and the rest were subject to hard labor far from home in terrible conditions. Agreeing with Stalinist policies at their most brutal such as this makes one an apologist for Stalin. That is not a smear. It is the truth.

Similarly, she also considers it a smear that I say she denied the Bosnian genocide, saying that she never said any such thing. Yet the exact quote on her website on the matter is, “The international community jumped to manufacture a “genocide” of a couple of hundred people, when real genocides like the millions of Armenians, Greeks and Assyrians by the Muslims are systematically ignored, denied.” If the dead of Srebrenica aren’t “real” enough for her then the inescapable conclusion is that “real” genocides for her must feature victims that aren’t Muslims.

Our two articles make stark the central difference between us: for me, the enemy is anyone who thinks that the will of God gives them justification to kill those who disagree with them, whoever their God may be. Anyone of any religion (or of none at all) who preaches tolerance and brotherhood (or purchases advertisements on buses in support of such a message) will have my support.

For Geller, the enemy is Islam itself, a monolithic block impervious of reform. There is no room for nuance and a friend/enemy dichotomy stark as can be. The year is always 1938 and the enemy is always Hitlerian in its threat to the civilized world.

She can pursue her quixotic quest to “defeat” jihad for as long as she wants. She will never succeed. There is no Soviet Union to collapse with this enemy; no Berlin that can fall. Man will seek to kill his fellow man in the name of God for as long as there is man.

Yet there will also be those who will seek to prove that God’s love is not with those who kill and destroy but with those who build and create. Those who support the #MyJihad campaign understand this and should be commended for it.

I hope, against all evidence, that Pamela Geller herself might one day join them.