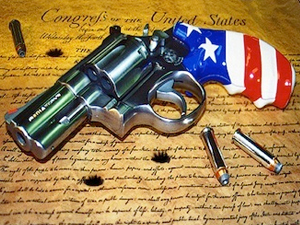 Many have opinions on the possibilities of how to implement gun restrictions in the U.S. while many others, including lawmakers, remain silent and at a standstill. Sure, everyone has his or her opinions on the matter, but can we really define a clear-cut line that will help diminish the rising gun violence that exists today?

The most recent tragedy of the shooting rampage at Sandy Hook, the mass murder in Aurora, Colorado, and the targeting of Sikhs in Milwaukee, have people frantic and demanding answers and solutions to prevent events like this from happening again.

These are just the most recent incidents that come to mind.

These specific tragedies are given wide coverage, but the gun violence happening right here in Chicago seems to slip under the radar. In 2012, there were over 500 deaths related to gun violence in the city, which was up over 11% since last year. Gun violence happens quite often, leaving us with no answers or logical reasoning to the immeasurable question of “why.”

First, they tell us, let us be more responsible gun carriers, follow the laws and keep them in a safe place, out of the reach of young children, incapacitated minds, and lawless individuals. According to one study, about 85% of parents who owned guns did not practice safe gun storage. It should be common sense to practice safe habits in the home, but gun control must first start with the reconstruction of the second amendment.

The right to bear arms is stated in the U.S. Constitution as a means for civilians to act either independently or collectively in defensive situations if there should be protection of the Free State. This amendment also implicates that this right should not be overstepped. As a nation, we have held on to this so tightly that the barriers are hard to determine because we must be careful not to limit this right. It compares to the right of free speech as well; examining to what extent is it reasonable to express their opinions without causing direct harm to another on intention or without merit.

So how can we satisfy the goals our forefathers and keep our garage full of guns, but still remain safe and upgrade gun policies to fit into the new age?

In recent news, there has been a lot of talk about what should be banned and new policies as an effort to decrease the recent violence that has been happening across the U.S. The efforts are a great push to reform because people seem to be realizing the importance of closing the gaps that exist. As the debate continues, some plans of action are to require better background checks, taking assault rifles off the street, eliminate the blame on video games and violent television shows, and providing better law enforcement services to prevent illegal gun possession.

The step to purchasing a firearm (legally) is applying for your FOID card, which that application can be easily downloaded online. The application asks you a series of questions to assess your criminal background and the state of your mental capacity. After you fill out the questions, you send in a $10 application fee, a photo ID, and your signature and wait for them to run a routine background check. The processing period is about 30 days, in which they check your records to see what is on file. There is no physical interview, no doctors note, no one that can speak on your behalf. In addition to that, you can also apply for a card even if you under 21.

In addition to these background checks that could be more exclusive and harder to pass, there is another way dangerous people are getting guns without having to conduct checks at all. Federal distributors of guns are the ones that are permitted and have the legal subjection to conduct routine checks, but for those “private sellers” that engage in gun transfers are exempt from those checks. By closing the loopholes on gun shows, auctions, and private selling, those attempts to obtain firearms by reckless individuals will be in vain.

Our obsession with the right to carry guns to protect ourselves is a battle I’m willing to fight for, however, the types of guns in which we have should be up for discussion.

The average American should not be allowed to own or operate assault rifles with artillery for mass destruction, even in the cases of sport. With those types of exclusions, it leaves our nation too vulnerable to those guns getting into the wrong hands. The argument is just not strong enough to allow the average individual that access.

According to Alex Jones, the reason us Americans want heavy artillery is not just for sport or “duck hunting.” If this is the case, then it is even more reason for qualified people to be the only ones that are allowed to carry guns like a Bushmaster .223 assault rifle, a semiautomatic variation of the military’s M-16 rifle, or a semiautomatic hand gun, all of which were used in these high profile shootings, and all of which can be purchased legally.

Although we have the right to carry guns in the case we would need to form a union against our government, that can still be done with licensed military or special law enforcement officials that serve just that purpose. And in the case military and law enforcement officials corrupt, civilians should have the opportunity to go through extensive training to carry weaponry that can protect citizens in the face of mass emergencies. For instance, the same type of training needed to become a police officer or an army solider should exist for those that will carry these types of firearms.

It is not the time to place blame on guns, it is a time for the prevention of violence. There have been debates lately about video games and how they may influence people to commit dangerous acts, or that holders of magazine cartridges are the reasons people decide to do something extreme. We see tragic things and explicit things every single day, whether it is something in the news happening across the world, or a simulation of an idea being splashed across our TV screens. However, recent studies have shown that there is not much of a connection between those things.

Regardless of the weapons that are easily attainable, people are the ones at blame for the violence, not the weapon itself. Regulation will help at the surface, but considering what is really needed to prevent gun violence, or even all violence in general is something worth examination. People who have the intent to murder will do so even without guns, so we should really be digging into the root of people’s intentions or their state of being. Piers Morgan makes a great point about increasing funding for mental health programs; and really focusing our subsidies on the matters that are important to common welfare should be the number one priority in every debate.

Why take away the games, movies, and shows that could be used as an outlet for aggression, but keep the actual vessels that promote and initiate violence?

Finally, we know that guns can slip into the hands of dangerous people, even when there have been background checks and safe storage of guns within a household. We saw this clearly with the young shooter that got into his mother’s gun case. Nevertheless, something that seems to go unnoticed is the illegal use and purchase of guns that haunts America.

With all of this said, there is a great amount of black market gun purchases, where dealers make sure the guns are not traceable, and where buyers obtain them with the purpose to harm and kill. Law enforcement must crack down on that population, the one that is not abiding by gun policies or the law in general. There are Special Forces within law enforcement dedicated to cracking down on drug-related crime and flagging those that have been accused of sex crimes, but there should be more efforts into actually getting in the streets and finding the root of black market gun purchases.

These are suggestions, many of which are currently being discussed by our top leaders in the hopes that this will be the answer to gun violence and prevention of future shootings like which we have witnessed in recent news. As a collaborative force, we can make these changes happen and help protect the safety of our nation. The key is continuing with ideas of reformation and come to a central agreement on all parties to actually make this work.