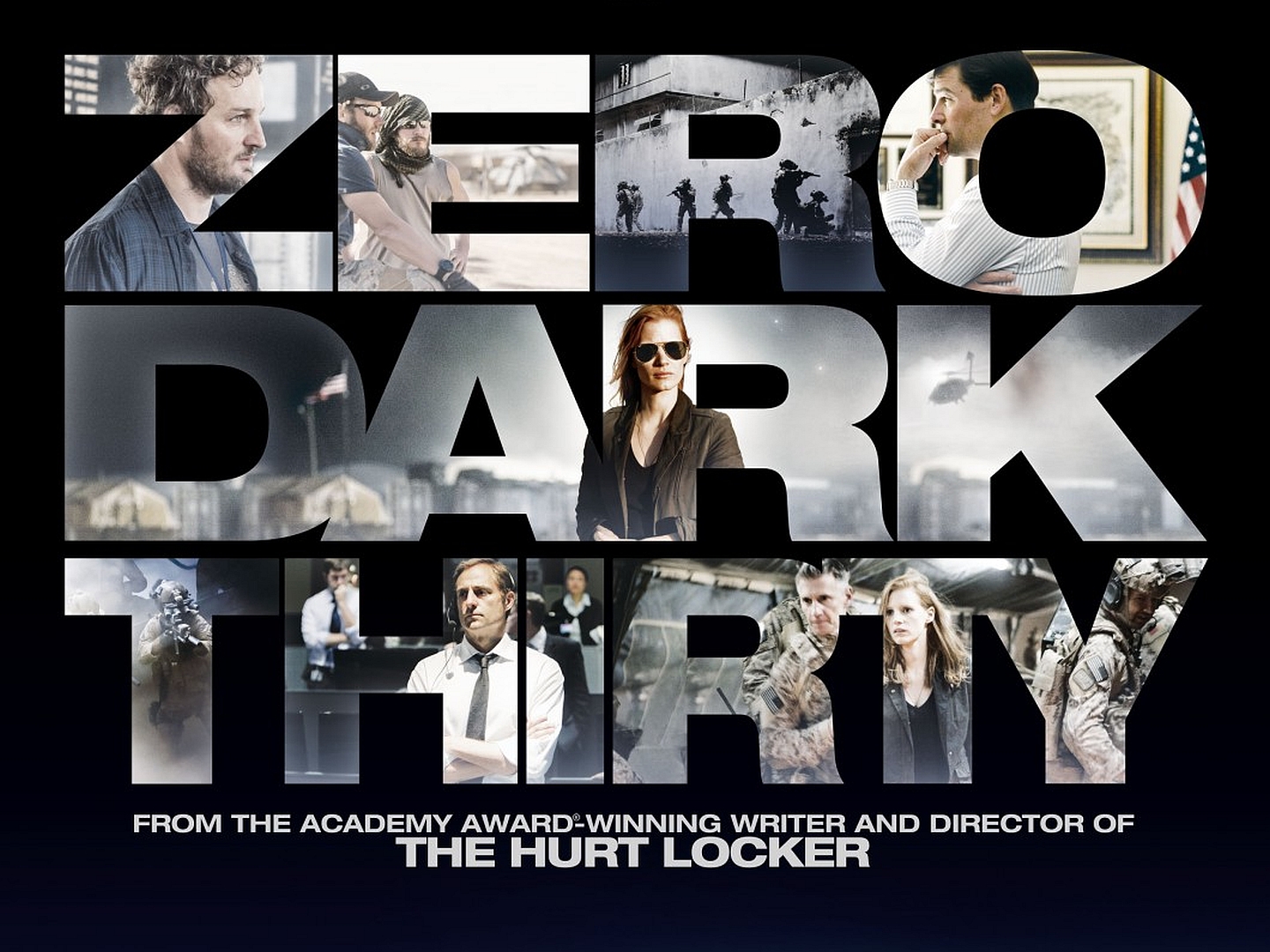 Hollywood has long been the culprit of taking a real-life accounts, adding multi-million dollar budgets, and perhaps an actor or director with the words “Oscar-winning” or “Oscar-nominated” attached to their name and turning it into a big screen, big name film. The dismal part is they leave it just like that. They take a real-life event and add sprinkles of sensationalism to have audiences flock into movie theaters and leave with what the audience thinks are the facts. Instead, the moviegoers become gravely misinformed. That is exactly what is in the newly released 2013 drama-action film, “Zero Dark Thirty.”

Zero Dark Thirty is a film directed by Oscar-winning Director, Kathryn Bigalow, and starring Oscar-nominated actress Jessica Chastain. Chastain’s character, Maya, is a determined CIA officer who was recruited right out of high school to work with the CIA. And now older and knowledgeable of CIA operations, she, in light of the horrid events that happened on September 11th, 2001, is now a part of an intelligence strategy team based in the U.S. embassy in Islamabad, to find terrorists connected to the 9/11 attacks, and ultimately a path to capturing Osama bin Laden, which in the long run actually occurred.

These events were made known to the public on May 2, 2011. And in America, the definition of nationalism and patriotism was almost redefined. Cheering and prideful chatting illuminated the streets and congratulations poured into the Obama administration. However, the film itself showed more of the ‘work’ that went into allowing that celebration to unfold.

The film is pieced together by segments that illustrate key events that lead the team, and ultimately Maya, on the path to finding bin Laden.  In Zero Dark Thirty, CIA operatives die from attacks from some al-Qaeda militants bombing or attacking known agents in efforts to delay the operation. However, Maya continues on a hard and fast mission convincing everyone around her to do whatever it takes to get bin Laden.

However, one of the major contours of the film, which is receiving sharp criticism is the clear use of torture of detainees, captured terrorists and assumed terrorists, all of which are believed to have ties to bin Laden and al-Qaeda (despite the fact that film opens with the words “based on first-hand accounts of actual events”). Senators Carl Levin, Dianne Feinstein and John McCain have all been on the detracting side of outright criticizing the films blatant use of torture saying that it is “inaccurate” and “misleading.”

These statements were expressed in a letter that the three Senators wrote to the CEO and Chairman of Sony Pictures, Michael Lynton, accusing the studio of unmistakably misrepresenting the facts and “perpetuating the myth that torture is effective,” and requesting for the studio to correct the false impression created by the film on audiences. The three Senators, whom are on the Senate Select Committee on Intelligence, detailed the actual information that led to bin Laden’s killing.

In addition, the three Senators are spot on about the film. In the very beginning of the movie, a connected henchman to al-Qaeda, named Ammar, is put in a holding cell and tortured in a variety of ways, including tying him up without food or water for days, stuffing him in a tiny cupboard-like apparatus chained like a dog, and ultimately waterboarding him. These types of techniques are used on many of the captured henchman and presumed henchmen that Maya and other intelligence agents on the team capture. There is even one scene where Maya is interrogating a detainee and has an agent slap the detainee every time she believes he is lying. She then stated, “You do realize, this is not a normal prison: you determine how you are treated.”

According to the film, after going through months of deathly interrogation over the span of a decade, Maya’s staunch determinism helps convince the CIA and the White House of the knowledge she digs up. The team finally catches wind to someone directly linked to bin Laden and ultimately tracking both to the infamous compound in Abbottabad, Pakistan. As the story goes, SEAL Team 6 raids the compound with methodical tactics and some missteps, but eventually finds and kills bin Laden, along with several others; in the process they also acquire documents, hard drives, and other pertinent files—“for God and Country,” as one of the SEAL Team 6 members stated after the accomplishment of the mission.

Initially, what has been missing from analyses of the film and the pro-torture message injected into the script, is discussing what effects would these depictions of torture have on audiences. Are audiences going to take much of this as fiction and as an enjoyable Hollywood’s take on a real-life event or walk out of the theaters and talk to their coworkers, friends, and family as if the film word-for-word was what really happened, and that the consistent use of those horrific interrogation techniques were a key element in finding the mastermind behind 9/11? Furthermore, will this film set us back in our understanding of the Islamic faith with the stereotypical and predictable way Muslims are portrayed in the film and perpetuate “us versus them” attitudes?

In Zero Dark Thirty, the depiction of torture as an effective method in combating terrorism is not only false, it also praises acts irresponsible and inhumane.

As Glenn Greenwald acknowledged in his article on the film, “For that reason, to depict X as valuable in enabling the killing of bin Laden is – by definition – to glorify X. That formula will lead huge numbers of American viewers to regard X as justified and important. In this film: X = torture.”

In all, it is no doubt that this film will pick up an Oscar nomination, and maybe a win. However, Hollywood has long been absent minded on the effects of its films on audience and by distorting the facts—even a little—to add some bang to box office revenue. Despite the efforts of the actors and the director, and all others involved, to produce a factual account of the efforts of U.S. intelligence forces to hold those responsible for terrorist attacks that happened in 1998, 2000, and mainly on September 11 and thereafter, the film allows the audience to see the CIA as blood thirsty and are willing to do whatever it takes, sans actual intelligence, to achieve a mission of defining and fighting terrorism; and moreover by capturing and being prejudice to anyone who may look like or perhaps sympathize with a bin Laden. Zero Dark Thirty basically failed the major factual test–torture is not, and was not, a vital step in getting information from terrorists, real or suspected.