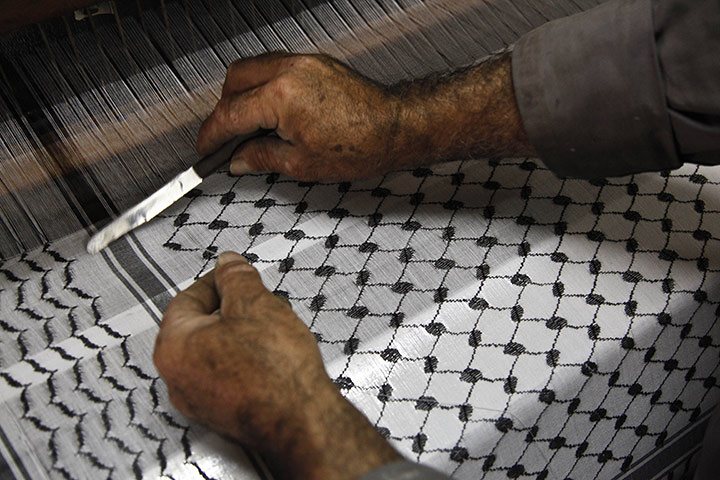 Wilson, the official football-maker for the NFL, secured a spot during this year’s Super Bowl to run a rather moving commercial taking viewers inside the only dedicated football factory in the United States where footballs are laced by hand and prepped for play in the championship game.

Imagine what would happen if the factory was forced to shut its doors for good or if a foreign army kept customers and materials out. It would be an affront to American culture.

This wouldn’t stop the production of footballs of course, but if this factory was the only football-maker in the country, the only site fitted with the machines necessary to sew, stamp, shape, and lace a football, this would be a different story — a story more like what’s happening to the Herbawi keffiyeh factory in Al-Khalil (Hebron) in the West Bank.

Fifty-two years ago, Yasser Herbawi and his family established the Herbawi Textile Factory to produce what has become today a symbol of Palestinian identity: the keffiyeh. It operates as the only manufacturer of the original, authentic keffiyeh and, according to some accounts, produced as many as 750 keffiyehs every day. Today, however, all but two of its machines are shut down and the Herbawi family is hard-pressed to reach 300 sales per week.

Commercialism and inferior imports play a large role in this dramatic decrease in sales, but so does Israel’s occupation which is responsible for strangling Palestine’s economy and consequently making it difficult for Yasser Herbawi to sustain his factory, to purchase new materials, to export his supply to the Gaza Strip and beyond, and to attract local customers able and willing to spend the money for a new keffiyeh.

Learn more about the Herbawi factory in this article, this video, and the video below.