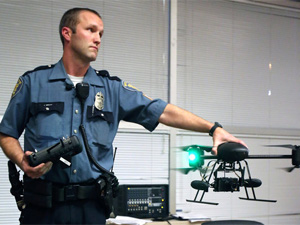 I am not ashamed to admit it. Growing up I was a big fan of Jessica Alba’s initial claim to fame: the futuristic sci-fi TV show that only ran two seasons in the early 2000s, Dark Angel. I specifically remember being infatuated with the creepiness of the Seattle police having a fleet of flying, unmanned aircraft that always seemed to be “watching” and waiting on everyday civilians. Most menacing was that each of these aircrafts also had guns attached to them so that they could carry out fast, swift assaults in a matter of seconds.

The fear of such aircraft as a reality lay dormant in my childhood imagination until this past week when I read that the manhunt for fugitive Christopher Dorner had compelled the Los Angeles Police Department to release a thermal tracking Unmanned Aircraft Vehicle (UAV, or “drone”) into the California wilderness. 1984 “Big Brother” jokes aside, what does this mean for the American people who, as reported by The Atlantic Wire, have been hunted before by drones and may soon be seeing an increasing trend in drone hounding?

The major question that must be addressed when talking about drones is “Is this legal?” Drones have been criticized for years on an international level and most recently by the UN High Commissioner for Human Rights who has issued a probe into US drone attacks in Pakistan that have resulted in far too many civilian casualty deaths. The U.K. based Bureau of Investigative Journalism (BIJ) has reported that since drones were first used in 2004, up until September of 2012, UAV strikes in Pakistan alone have killed as many as 881 civilians including 176 children. Most appalling were attacks like the one in Datta Khel, Pakistan in March of 2011, where as many as 53 innocent civilians were killed, and the attack in 2009 on the Yemenis village of Al Majalah, which killed as many as 41 civilians, including 21 children. With regards to the attack on the village of Datta Khel the CIA to this day is sticking by a sworn affidavit, which claims that no civilians were killed.

Internationally, drone strikes flirt with the boundaries of dozens of formal laws specifically regarding sovereignty and targeting issues. The majority of drone attacks carried out by the U.S. are taking place in Yemen, Pakistan, Somalia, and other countries like these that are not officially war zones. The concept of targeted assassinations in sovereign States without permission, trial, or combat becomes very questionable. This was brought to the forefront when American citizen Anwar al-Awlaki was killed in a drone attack in Yemen in 2011. The American government has been slow in addressing the legal issues around this attack but recently released a memo justifying UAV attacks in general and specifically ones against American citizens even though such action ignores the 5th Amendment and due process.

When addressing international targets, the memo claims that drones are used only for high level combatants and that all those associated with terror groups like Al-Queda can be targeted in an aura of war since they live in what they believe is a constant war. The semantics  game played here to tip-toe over the handful of international war laws that the U.S. has signed is almost comical, yet it gets even worse when the White House addresses U.S. citizens. The memo claims, “We recognize that there is no private interest more weighty than a person’s interest in his life. But that interest must be balance against the United States’ interest in forestalling the threat of violence and death to other Americans…” This broad wording would put people like Christopher Dorner straight into the cross hairs of an UAV.

The memo goes on to highlight three basic criteria for attacking Americans. First, an informed U.S. official must believe that the person in question is an imminent threat. Second, capture must not feasible. Third, the operation needs to comply with the laws of war. Where the memo gains credibility, perhaps the only place it does so, is that it says that these attacks can only happen on U.S. citizens outside the country. But when drones were first deployed in general, their use was only for targets “outside” the country. Only a handful of years into their true development, however, UAV’s have been turned on targets within U.S. borders.

Dorner, who, as of my writing this, has locked himself alone in a California mountain top cabin, has to date killed and critically injured officers who have attempted to capture him (capture may not be feasible). He has willingly killed and intends to still kill multiple American citizens (officials believe he is an imminent threat). And technically, if he is alone and his place of refuge has no higher purpose for the local community other than that it is a residence, sending a missile into it would not violate any law of war directly. So theoretically there is not much stopping the LAPD from lobbing a 3,750-pound UAV payload into Dorner’s location. Suddenly Dark Angel has lost its far-fetched sci-fi fantasy fiction.

The nomination and probable selection of counter-terrorism chief, and leading White House proponent of drone warfare, John Brennan, as director of the CIA poses an even more daunting future for those who see the true threat of UAV usage. Many domestic law firms, specifically the ACLU, have brought into question using UAV’s on American soil. This challenge alone will not suffice. Drone capabilities are ever increasing, and as they do, we are becoming threatened on a grand scale.