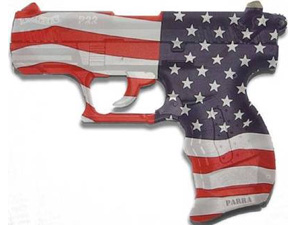 I recently gave attention to the hot topic issue of gun control, and the policies and ideas for reformation. This matter will not fade quickly and continues to make headlines, and lawmakers are staying in constant debate trying to give some kind of ease of mind to American citizens without treading on the longstanding right to possess guns.

It is definitely about time that this issue is being addressed; unfortunately, it seemingly had to come with tragedy. Our nation seems to be realizing that at least without a proper discussion, things will not change and this country will continue to become increasingly more dangerous to live in.

So this leads me to question: how do we hold up to other countries? Why is it that we continue to see mass shootings and horrific gun related disasters happen, but we only seem to mourn the incidents rather than take a stand to prevent it from happening again in the future?

President Obama has been on the frontlines of this issue, trying to combat it with full force and a strong stance. He tenderly believes that deliberate action is needed in regards to guns, and in addition to the 23 executive orders aimed at gun safety, he contested that an assault- weapons ban “deserves a vote in Congress.”

I guess we have to take a first step somewhere. In the past 50 years, 15 of the 25 worst mass shootings took place in the United States. This means that we are generally a violent nation, and where we stand among other countries is outstanding. According to a study done by the Washington Post, when compared to other countries in the OECD, our assault related deaths outnumber other countries (excluding Mexico). The study outlined some interesting facts about guns, shootings and violence in the US, but this particular chart shows the trend throughout time, rate, and comparison. It is important to understand our history with violence in general and what compels us to act upon violent urges. Kieran Healy, a sociologist from Duke University, further breaks down each country and their level of violence from the same time period.

There are enough guns in the US where every adult can have one, so if we are typically a violent nation,  it only makes sense that more guns available and obtained will result in more gun violence. Harvard University’s Injury Control Research Center released a literature review that emphasized how more guns do indeed equate to more homicide. This is also true in other wealthy countries. However, the difference is that many other countries, including those with high gun traffic, still impose stricter gun laws than the US, which proves that violence overall is continually on a downward trend. In the US, there is a higher murder rate and more guns per capita; however, our reaction to gun violence has not yet been reformation.

The US and Yemen are the only countries that consider gun ownership a right, but according to The Small Arms Survey, even Yemen is starting to take a look at their gun laws to initiate order among civilians.

One of the most terrible gun-related incidents that happened in Britain led to much stricter gun laws and preemptive measures to decrease violence. In 1996, the town of Dunblane faced a school massacre, resulting in the death of young school children. Citizens of Britain raised the same type of questions that Americans are asking after the Sandy Hook massacre; how did “someone” like that have access to such a deadly weapon? Appropriate action was granted: the Prime Minister responded by asking the opinions of the residents and over time some of the strictest gun laws in history were passed. It only took the UK government a year and a half to pass the legislation to ban the private ownership of handguns in Britain. This reaction was warranted by a public campaign and without the number of proactive people involved, the laws may never have changed.

Initially following the ban, there were some skeptics and the statistics seemed to prove that even with the ban the amount of crime hadn’t changed. However, over the years crime continued to drop at a steady rate. There is no quick fix to such a worldwide problem, but steps towards restructuring prehistoric laws will result in some sort of change.

The difference between Britain and the US however, is that those gun restrictions were more welcomed by the public than the apprehensive American. We are truly afraid for some unknown reason. Maybe it is because we fear allowing such control by the government, or possibly we want to feel protected and not stripped of our rights. But what can be learned through other nations and their efforts to make their countries a safer place to live is that some kind of action can and must be taken to lessen the probability of tragic events.

So the continued moral of the story is still not to just treat Americans like heathens and put them on permanent time out, but to educate on the fact that maybe there is more that can be done to lower crime and homicides. For the UK, gun control had a positive impact by decreasing the number of crimes overall. The US has a very “pro-gun” culture propagated by powerful advocates of the preservation of gun rights. The American gun culture will be a difficult thing to change and any attempt will be fought by those that stand behind legitimate gun use. People are and always will be the reason the gun is a dangerous tool, so impose a stronger screening process and make it a point to limit the ease of access. Complete prohibition may not be the best thing for the US considering the culture we live in, but it is nevertheless important to learn what we can from other countries.

Smarter Sentencing Act: Will it Decrease Racism in the War On Drugs?

Pistorius and the bigger picture of domestic violence