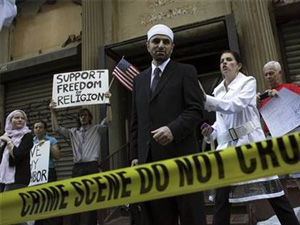 As the U.S. goes into its 237th year as a nation, we are reminded of the struggle for freedoms that ultimately led our Founding Fathers to declare independence. Unfortunately, the struggle to maintain those freedoms continues today, as proposals for places of worship – whose creation are protected under the Religious Land Use and Institutionalized Persons Act – come under scrutiny in neighborhoods across the United States. As the Department of Justice shows, groups of all faiths have struggled in disputes with local zoning boards, but none more so than the Muslim community in America.

The DoJ report states that “increasingly, Muslim mosques and schools are particularly vulnerable to discriminatory actions … often under community pressure.” In some communities, opponents of mosques have passed out fliers to stop establishment of new mosques, destroyed construction equipment at a mosque building site, and even held pig races on Fridays near proposed Mosque property, in a foolish attempt to offend Muslims.

While most local officials involved point to traffic, noise, drainage, aesthetic, and property value as potential issues, many opposed community members voice their anti-Muslim sentiments ranging from fear of who is funding the mosque to fear that Muslims are attempting to take over the country. It would not, therefore, be unfair to at least question whether concerns about traffic and noise are masking underlying anti-Muslim sentiment. Indeed, the cases noted in the DoJ report involved Christian, Jewish, Muslim, Hindu, Buddhist groups; but, unlike the others, Muslim groups inexplicably receive the most opposition.

The current opposition to mosques is illustrated by cases stretching from California, to New York, New Jersey, Connecticut, Tennessee, and Michigan among other states.

Studies of churches in the United States showed that 500 new churches are created every year (4,000 created, 3,500 closed). In stark contrast, only 1,200 mosques were created during the decade following the turn of the century (120 mosques per year). It is curious, then, that mosques – if treated exactly the same as churches – should encounter as many problems (and more) than churches have. In the last three years alone, there have been 37 disputes over proposed Mosque construction sites.To add to these disputes, there are were 160 cases of vandalism and other discriminatory acts committed against muslims in 2011, a 50% increase from 2010, and the number of anti-Muslim hate groups, according to the Southern Poverty Law Center, has tripled from 10 groups in 2010 to 30 groups in 2011.

To the credit of the court system and the DoJ, twenty-three of the construction cases have been resolved; some Muslim communities even agreed to reduce the scope of their projects to show their willingness to cooperate. In 2011, a judge ruled that the proposed mosque in Murfreesboro, Tennessee (which has been a heavily contested) was permitted to open; Murfreesboro Muslims are thankful to be able to pray in their new worship center before the end of the holy month of Ramadan.

Unfortunately, a few mosques (including the one in Murfreesboro) have had to resort to more serious legal action because they believed discrimination was involved; in numerous cases, City Council meetings were packed with opponents to mosques, many claiming traffic concerns while some claimed fear and hatred (and ignorance) of Muslims. For example, a group in Lomita, California hopes to expand its current mosque to accommodate growth; the proposal has been unanimously rejected by the Lomita City Council, which cited a potential increase of traffic.

The rejection came after a traffic study showed that the project would not make traffic conditions worse; in fact, it stated that the “renovation project would improve the flow of traffic and parking”. It should be noted that smaller, separated mosque buildings already exist, and the organizers simply hoped to replace them with a more efficient, connected structure. It is not clear, then, what legitimate concerns the community might have, but it would not be unfair – given the many other cases previously mentioned – to speculate that there has been religious discrimination involved. The opposition is not isolated, as proven by more recent events.

On July 4th, 2012, we yet again witnessed opposition to Muslims in the Joplin community (previously, the local mosque had its sign burned; a 2008 case which was never resolved). While Muslims showed their patriotism by setting off fireworks, an unidentified arsonist showed his hatred by setting the mosque on fire. Sadly, the Islamic Society of Joplin’s building was set ablaze for a second time in a just over a month on August 6th. This leads one to the conclusion that there is still unfair animus – and thus ignorance – directed towards the Muslim community. Groups in the community, including the South Joplin Christian Church, have reached out to the Muslim community in Joplin to show solidarity; they are recognized and deeply appreciated by the Muslim community, as they represent the hope that one day America will, indeed, be free from all forms of discrimination.

Like followers of other faiths, Muslims wish to worship in peace. Opponents need to realize that Islam is a religion like any other religion and deserves the privileges that other religions are afforded under the law.

Fear of foreign radical groups of so-called “Muslims” (i.e. Al-Qaeda, Taliban, etc.) is irrational and has absolutely nothing to do with local Muslim communities. U.S. Courts – and the vast majority of Americans – have done an excellent job upholding the rights of Muslims and supporting their freedoms. Unfortunately, it is the small minority that has been the loudest. The work is not done until these groups (still large enough to have an impact) end their attempts to repress religious freedom – the same sort of repression that the Pilgrims escaped centuries ago.

The many institutions, groups, and individuals that understand religious freedom and do not oppose the creation of mosques should be appreciated and applauded – and should participate in the struggle against unfair opposition to the rights of every religious community.