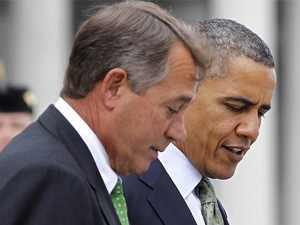 From watching the President’s address there were some good plans for what this administration will tackle in the next four years, but the speech seemed to be lacking some girth to restore faith in the American public on the issues they face every day and to address the well-known politics of a partisan, do-nothing Congress.

In President Obama’s 2011 State of the Union address, he carefully detailed an agenda that was filled with economic measures and how Congress should address the recession. This was the time where he introduced his Job’s Act, a comprehensive plan that many economists lauded of which some parts were eventually passed by Congress. This address just seemed like a presentation of a bunch of bids with no clear pathway of becoming meaningful, effective legislation. It appeared, instead, to be an abundance of rhetoric and promises to the American citizenry; everyone on the political spectrum could feel like their ideas were being thought by the President.

This speech was peppered with rhetoric that lends itself to an election campaign promise and not a presidential proposal that would eventually lead to legislation that alleviates the major problems America faces. His ideas seemed rehashed from months of campaigning, and this speech was an opportunity for President Obama not to continually address the problems his administration and the American people know are present, but give specific plans on how his administration will handle those problems to sustain the Union. As a second term president, there is not another election to worry about so he has nothing major to lose.

To give the President credit in his speech, he did remark his openness and willingness to seek bipartisan compromise to get comprehensive legislation enacted quickly.

There were many good ideas the President proposed, such as:

These were important issues to touch on, and to urge Congress to act on, but in his second term, it is not time for the president to use appealing rhetoric to make the American people feel better about the problems facing the nation; it is time for him to enunciate clear pathways for fixing the problems the nation is facing.

In the first State of the Union address of President Obama’s second term, there should not only be an agenda of what he plans to do for the next four years, but also drafts of legislation written by this administration that he wants to see this Congress pass.

For instance, the immigration debate.

In his address he urged Congress and the Republican majority especially, by capping his position and stating, “Send me a comprehensive immigration reform bill in the next few months, and I will sign it right away.”

But in that proposal on immigration, Obama tried to heartily appeal to Republicans and still keep his support from Latinos and immigration advocates by talking about how to address the immigration issues by noting he would:

And since his immigration plans have been leaked and obtained by USA Today, President Obama seems to be pretty aligned with his SOTU proposal, but does not line up with the vision of the GOP.

One of the big moments came when the President noted the dismantling of al-Qaeda, working with the Afghanistan government, and efforts to bring American troops home. “By the end of next year, our war in Afghanistan will be over,” the President boldly affirmed during the address. “We are negotiating an agreement with the Afghan government that focuses on two missions: training and equipping Afghan forces so that the country does not again slip into chaos, and counter-terrorism efforts that allow us to pursue the remnants of al Qaeda and their affiliates.”

Furthermore, although President Obama discussed his plan to bring American troops home, he has the difficult task of upholding that promise and needing a firm strategy in place. When troops were placed in Afghanistan and Iraq, the Bush administration received heavy criticism from both parties, high-level government officials, and prominent people in academia about having no real plan on withdrawal or clear vision on ending the costly war. Now, President Obama is picking that plan as a top priority of his administration and must carefully devise a plan to do what the previous administration could not.

Overall, President Obama’s address was a regular rally-around-the-flag speech, meant to stir emotions, increase bipartisanship and restore faith in the nation at home and abroad. But there was still an empty feeling when the President said his farewell- a lingering need for more detailed plans to address rising gun violence, the dismantling of the American middle class, the millions of immigrants awaiting the fulfillment of the elusive American dream, the millions of jobless and homeless Americans, and the troops who have remained prideful in fighting a pointless war for the past decade.

More urgently, there is a need for the President to address a more upcoming problem. This problem will occur in the coming days and is something known as a sequester, often characterized as a cleaver. This governmental function will bring looming cuts and those cuts will fall on some of the most important functions of the U.S. government. In a New York Times Editorial, they did an in-depth approach to what will, and could be, shrunken if bipartisanship efforts do not come through, much of which was included in the proposals of President Obama in his State of the Union address.

Mr. President, the American people are counting on you and Congress to work together to give amicable and feasible solutions to our real problems.