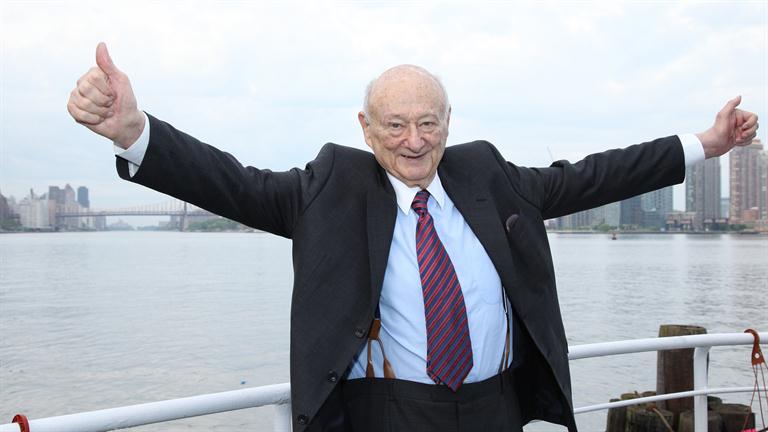 On the night of Friday, February 1st, 2013—while watching CNN—I witnessed two men of some prominence disgrace themselves on national television, and the worst part about the whole affair was that neither of them appeared to realize what he was doing.

I’m referring to Piers Morgan’s interview with the late Edward Koch, former mayor of New York City. In the course of Koch’s last television interview before his death, Morgan turned to the subject of the former’s outspoken opposition to President Obama’s nomination of former Senator Chuck Hagel to succeed Leon Panetta as Secretary of Defense. After generously dismissing the idea that Hagel is an anti-Semite, the late mayor instantly and sadly transformed himself from an iconic American political firebrand into an irrational unabashed hate monger.

Koch caricatured Hagel’s attitude toward US-Iran relations as rooted in the belief “that there should be much greater light, distance, separation between Israel and the United States so as to make the Arab countries more friendly to us.”  That Koch is embarrassingly unaware that Iran is not an ‘Arab country’ and that many Arab-majority states are hostile to Iran certainly does not make him a hate monger—although it pretty much discredits him as a competent observer of Middle Eastern geopolitics. It’s actually what he goes on to say that should have made Morgan think twice before referring to him, at the end of the pre-recorded interview, as the “late, great Ed Koch.”

“They want to kill us. They want to kill Christians and Jews. And they say you’re going to convert either voluntarily or by force. And that’s been their history” (my emphasis). There can be no doubt that the “they” to which Mr. Koch refers is not the current Iranian government, or any distinct group of policy makers. No. It is rather all Muslims, Arabs, Iranians—the whole lot of “them.” They’re all alike after all, aren’t they? One wonders if Mr. Koch knows that there are actually Palestinian Arab Christians struggling in deep solidarity with their Palestinian Arab Muslim sisters and brothers for a just and peaceful resolution to the horrible conflict at the focus of Mr. Koch’s comments.

If one were to doubt at all the abject bigotry of Koch’s statement—as I myself did for a brief moment—one need only listen to what followed. Incredulous that Hagel would risk creating any distance in US-Israeli relations for the sake of better relations with Arab countries, Koch displays his utter contempt for Muslims and their religious practices—in this case abstention from alcohol—by mocking the fact that “the sheikhs and the kings and the presidents in Egypt and Lebanon and Syria and Iraq” would be “toasting with orange juice Hagel’s appointment.”

Continuing his racist diatribe, Koch went on to share his views on the Palestinian leadership, referring over and over again to Mahmoud Abbas—the President of the Palestinian Authority who sometimes is referred to by his patronymic, “Abu Mazen”—as “Abu Abbas.” Really? According to Koch’s “analysis,” the only reason why there is no peace between Israel and the Palestinians is because “Abu Abbas”—whoever that is—is “afraid if he entered into a peace treaty with Israel that his own people would execute him. They don’t want a peace. What they want is a single state where the Jews will be submerged and the Arabs will impose Sharia or whatever else their Islamic religion requires” (my emphasis).

I remember thinking to myself what a pity it is that Ed Koch is “going out” this way; that in his last television interview he presents himself, not as an elder statesman with parting words of wisdom, but as an ignorant, hate-filled bigot. As I sat watching, I remember wondering why Morgan chose to air this interview, especially since I anticipated an imminent rebuke, or at least a pointed challenge, to Koch’s deeply troubling words. I expected no less from Morgan who is famous  for taking interviewees to task for views he finds to be morally objectionable (e.g., Wayne LaPierre and any other NRA spokesperson or sympathizer).

But then it became painfully clear to me that Morgan apparently had no problem with what Koch was saying. Or worse, he had serious problems with it, but chose to say nothing other than to make an anemic reference to “the obvious oppression of nearly 2 million Palestinians on the Gaza Strip” as “terribly depressing.”

Yes, the suffering of millions of Palestinians is “terribly depressing,” but it is also morally offensive—as is all prolonged human suffering caused by gross injustice. And this moral offense is deepened by the complicity of men like the late Ed Koch who spew hatred about Arabs and Muslims rather than recognizing the complexities of the conflict and the unassailable human dignity of all those involved—both Palestinian and Israeli. The moral offense is also deepened by the failure of a journalist, with the platform of a Piers Morgan, to offer even a respectful challenge to such hatred.